Nebraska Gov. Pete Ricketts (R) has taken on the University of Nebraska-Lincoln (UNL) as he uncovered their hiring of a firm pushing UNL to incorporate the tenets of critical race theory into nearly all aspects of the university system, telling Breitbart News that “while the University has repeatedly denied that their plan includes Critical Race Theory, their own records reveal that the consultant behind their efforts is a critical race theorist.”

“From racially motivated hiring practices to harmful trainings, the University’s plan would inject Critical Race Theory (CRT) into every corner of campus,” Ricketts said in a November 18 press release. “It will pit people against each other by conditioning everyone to see others through the lens of race rather than as individuals with unique strengths. UNL’s focus should be on educational excellence, not ideological indoctrination.”

The plan comes courtesy of Halualani and Associates, a diversity, inclusion, and equity consulting organization hired for nearly $300,000 to “map” UNL’s diversity “action” and recommend more “diversity efforts” for the university to initiate in the future. Halualani and Associates’ five-year study was commissioned in 2011, and in 2017 UNL Chancellor Ronnie Green announced his intention to move forward with the firm’s recommendations.

“This highly-paid consultant is not only a CRT scholar,” Ricketts explained to Breitbart News, “but they have called for the overthrow of capitalism and a tax on the use of English. The University must scrap their plan to push CRT on campus.”

Indeed, Halualani and Associates founder and Managing Principal Rona Tamiko Halualani has written about the “Hegemony of English” and the need to “replace” what she calls the “Western modernization paradigm.”

As part of her crusade, in her book The Handbook of Critical Intercultural Communication, she proposes “The English Tax” in which “one of the objectives … is the curtailment of the use of English. The users of English, whether they be native or nonnative, will hesitate to use English when the English Tax is practiced. They will think twice if they should use English or not.”

With the help of Halualani and Associates’ extreme founders, by 2020, UNL branded its pursuance of critical race theory policy as its “Journey for Anti-Racism and Racial Equity” and opened its mission statement with a call to action based on the police killing of George Floyd, which has become a boilerplate remark for many universities, school districts, and corporations across the country in their implementation of similar policies:

It was yet one more reminder of the disproportionate numbers of Black and Brown individuals who die at the hands of police in the United States, and of longstanding structural racism and lingering white supremacy in our country. George Floyd’s murder, in the wake of many others, also sparked a call for institutions and other power structures to be more responsive to racism and to be, in fact, anti-racist. Silence was no longer an option. [Emphasis added].

Under the direction of Green and Vice Chancellor for Diversity and Inclusion Marco Barker, UNL’s “Journey” promises a perpetual state of “action,” saying, “Any set of actions will not reflect all of the work that must be done to dismantle racism, but it provides a starting point identified by many stakeholders across the institution.”

In a November 30, 2021, column titled “Choosing Educational Excellence over Ideology,” Ricketts charged Green with having capitulated to a plan developed by “ideologues” who believe “UNL is a racist institution.”

“Chancellor Ronnie Green believes the University of Nebraska-Lincoln (UNL) is racist,” Ricketts asserted in the column. “Under his leadership, UNL recently released a plan to address ‘institutional racism’ as part of its ‘Journey for Anti-Racism and Racial Equity.’ From racially motivated hiring practices to divisive trainings, the plan would inject Critical Race Theory (CRT) into every corner of campus.”

This plan is the product of ideologues—not thoughtful Nebraska academics. Needless to say, I could not be more disappointed in the Chancellor’s plan, and I completely disagree with the notion that UNL is a racist institution. UNL’s focus should be on educational excellence, not ideological indoctrination. At its core, the plan is legally questionable, intellectually flawed, and politically charged.

The University’s misguided focus on achieving equity of outcomes, rather than equality of opportunities, is pushing a Marxist and communist ideology. It fails to honor our American values of respecting individual rights and focusing on excellence. And it betrays the legacy of our country’s great civil rights leader, Dr. Martin Luther King, Jr., who dedicated his life to the dream of Americans judging one another according to the content of their character and not skin color.

“We have said this before, CRT is not imposed on this campus, nor will it be,” Green continued. “Nothing in this plan changes that. Recruiting more diverse candidates for faculty and staff has nothing to do with quotas. It’s about getting diverse candidates for a job and then hiring the most qualified person.”

Furthermore, University of Nebraska system President Ted Carter wrote a November 22 open letter to Nebraskans in which he “applaud[ed] Chancellor Ronnie Green for bravely beginning the dialogue” but assured that “we will not impose critical race theory, nor any theory, upon students. We will not hire candidates based on their skin color. We will not close our doors to any qualified student. We will not limit the free, robust exchange of ideas on campus – one of the most cherished ideals in higher learning.”

As Breitbart News has previously reported, given the emergence of critical race theory as a major political issue, institutions who wish to implement it may surreptitiously refer to it by other means, or camouflage it behind phrases like “culturally responsive teaching” — which uses the same CRT acronym — “culturally competent,” “anti-racist,” and “equity.”

To “embark on a Journey For Anti-Racism and Racial Equity,” the call to action promised to “[utilize] Ibram Kendi’s definition on becoming ‘actively conscious about race and racism’ and taking ‘actions to end racial inequities.’” 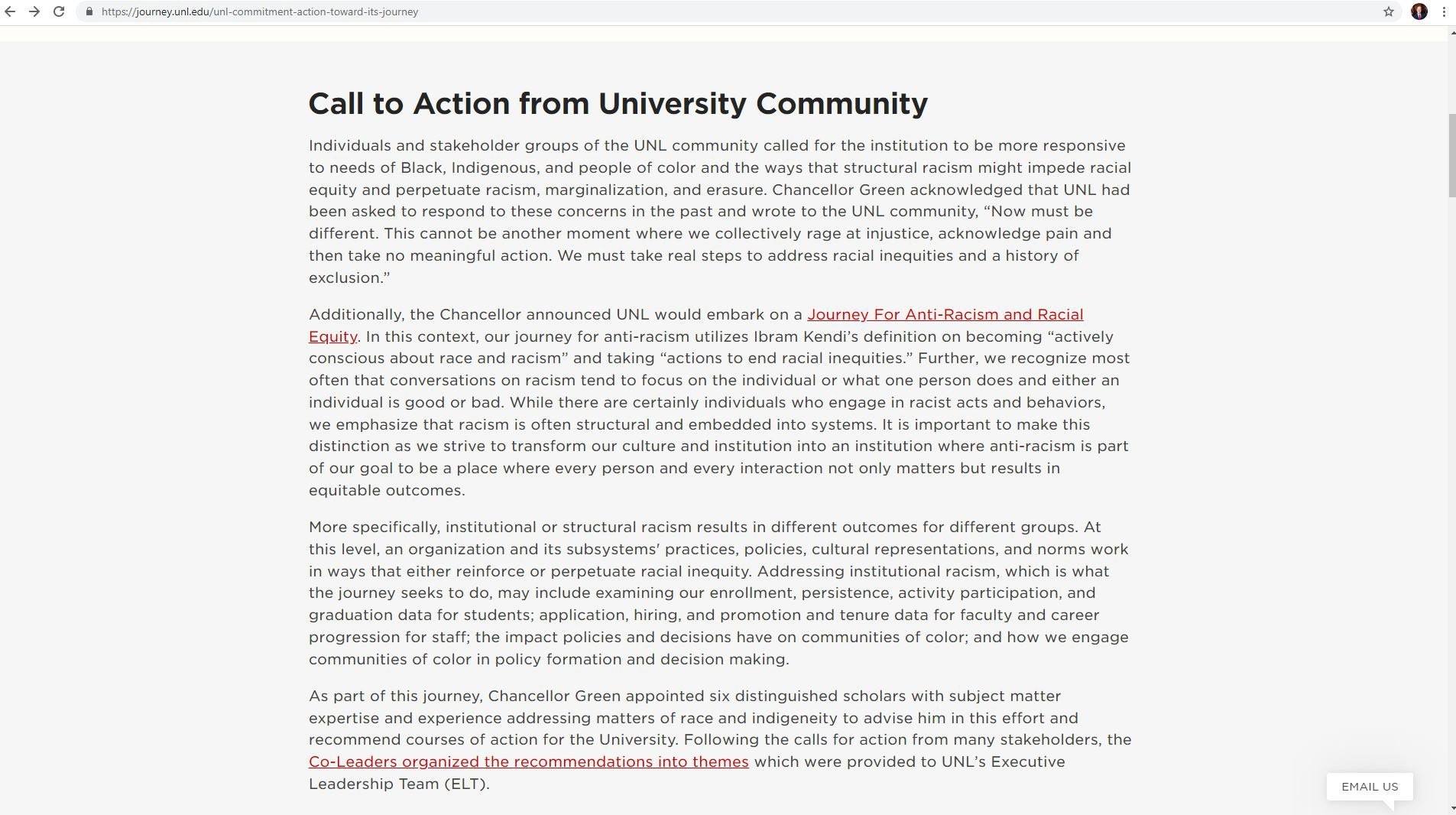 Green said in the call to action that “now must be different. This cannot be another moment where we collectively rage at injustice, acknowledging pain and then take no meaningful action. We must take real steps to address racial inequities and a history of exclusion.”

University of Nebraska Board of Regents member Jim Pillen said his board was not notified of the “Journey,” until after it was implemented. “The Board of Regents has not approved this so-called ‘journey.’ To call Nebraska students and staff racist is wrong. To give preferential treatment in hiring based on race is wrong,” he said. “We must fight the crusade to implement Critical Race Theory.”

According to Ricketts’ office, Green also “misrepresented [the governor’s] position on it in conversations with University stakeholders. He has told people that I support it, and nothing could be further from the truth.”

In a November 22 press conference, Ricketts responded by saying, “I was misled by Ronnie Green. I have lost all faith in Ronnie Green — I don’t believe anything he says anymore. And I don’t know how you get that back. So, I could not be more disgusted with what just happened.”

“That document is basically saying the University of Nebraska is systematically racist,” the governor continued. “I don’t believe it.” He added:

Green stated he “apologized to the Board of Regents for not fully engaging them in the development of our Commitment to Action prior to it being rolled out to our UNL community, or of the work of our Journey since it was announced in the summer of 2020.”

After Ricketts met with Carter Wednesday, UNL diversity, inclusion, and equity statements were watered down, mostly removing references to Kendi.