Former Sen. David Perdue (R-GA) believes Democrats would have perpetual control over Georgia should Stacey Abrams be elected governor, he said during an interview on SiriusXM’s Breitbart News Saturday.

Perdue, who announced this week he is running for governor, warned frontrunning Democrat candidate Abrams’ push to loosen voting restrictions would translate into Georgia law if she were to win the race, and that her new laws would open the state to never-ending Democrat election victories.

“We need to understand, we will not get Georgia back if she wins this governor’s race. She has talked about opening our borders. She’s talking about opening our elections to have no voter ID. She wants illegal immigrants to have the right to vote — anybody can vote. This would put them in power forever,” Perdue said.

Abrams has been hyper-focused on voting laws since 2018, when she lost to Gov. Brian Kemp (R) in her first run for governor by less than two percent. She claimed her loss was a result of “voter suppression,” and she has notoriously never conceded the race.

Abrams also became an outspoken voting rights activist that year, launching the group Fair Fight, which has raked in more than $100 million in fundraising since its launch, per federal election records.

In the midst of her ongoing activism, the Georgia Democrat has conveyed somewhat muddled positions on voter ID laws specifically, appearing to compromise on the issue at one point this year as Congress sought to pass an election overhaul bill that would, in part, federalize aspects of the voting process but maintain voter ID requirements, per an analysis published by the Washington Post in June.

Perdue recalled of Abrams’ behavior in the 2018 election aftermath, “She’s immediately claimed that she had been cheated and there’s voter suppression, and now she’s gone around and made a lot of money, millions of dollars, over the last three years telling the country that she’s really the governor of Georgia and that she was she was cheated out of it by voter suppression.”

Perdue, a wealthy businessman and cousin to former Georgia Gov. Sonny Perdue (R), won his election for U.S. Senate in 2014. In his bid for reelection in 2020, he beat now-Sen. Jon Ossoff (D-GA) but did not meet the 50 percent threshold required by Georgia election law to clinch the victory. The race moved to a runoff, where he and former Sen. Kelly Loeffler (R-GA) — who was competing in her own runoff — both narrowly lost in blockbuster races that resulted in Democrat control over the U.S. Senate.

The defeats followed President Joe Biden being certified the winner of the presidential election in Georgia by around 12,000 votes out of five million cast — the first Democrat presidential candidate to take the state in nearly 25 years.

Abrams has been largely credited with the Democrat victories because of her aggressive activism with ballot measures and get out the vote efforts during the last election cycle. However, former President Donald Trump has also been the leading voice in blaming Kemp for the Republican losses, and Perdue — who was quickly endorsed by Trump when Perdue launched his campaign — has echoed similar concerns about Kemp. 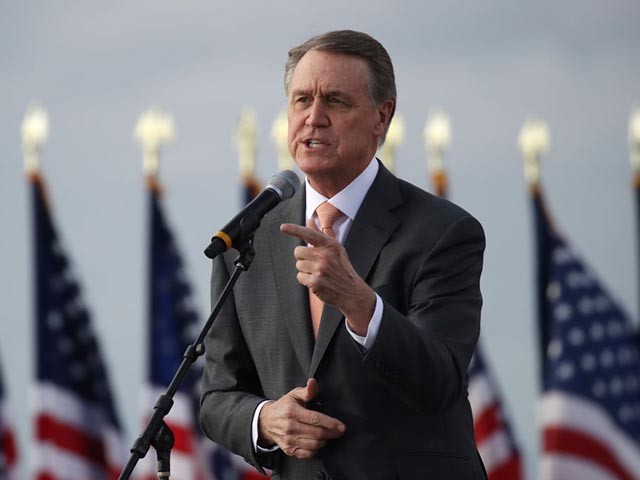 Sen. David Perdue (R-GA) attends a rally with Vice President Mike Pence in support of both he and Sen. Kelly Loeffler (R-GA) on December 4, 2020 in Savannah, Georgia. (Spencer Platt/Getty Images)

Perdue said Saturday he decided to run for governor “against an incumbent Republican governor who I think gave away the election process to Stacey Abrams in 2020 and has lost confidence of our party, and I just don’t see any way that he can beat Stacey Abrams.”

One point of criticism against Kemp was over a consent decree his secretary of state, Brad Raffensperger (R), signed off on in March 2020. The consent decree was a settlement between the Georgia Democrat Party and Raffensperger that elaborated on the state’s process of signature verification on absentee ballots. The settlement was published on the website of Mark Elias’s then-law firm, Perkins Coie, a firm heavily involved nationally in fighting to loosen election laws in 2020. The settlement required a total of three election officials to sign off on absentee ballots that could not be signature verified. The settlement also specified the timeframe within which a voter must be notified of their rejected absentee ballot so that the voter had a reasonable opportunity to “cure” the signature issue.

Perdue acknowledged Kemp did not sign the settlement but argued the governor was complacent in the pre-election signature fight. 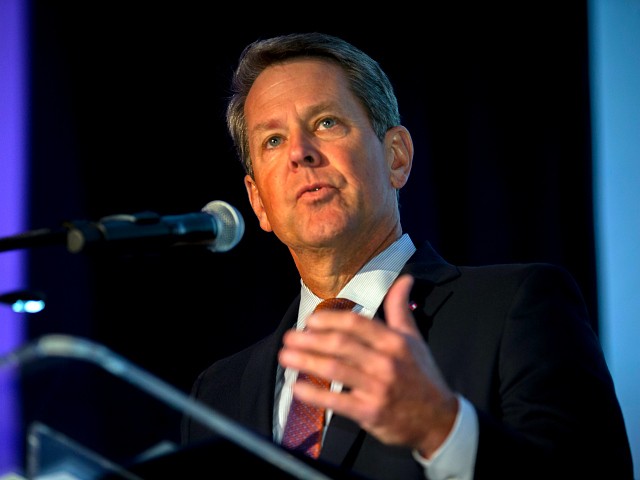 Another point of criticism against Kemp made by Trump and others was that Kemp did not call a special session after the November election but before the January 5 runoffs so that the state legislature could choose its own separate set of electoral college electors. Kemp argued at the time that the move would have been unconstitutional and “immediately enjoined by the courts.”

Perdue said he too asked Kemp for a special session in November and that he has also asked courts multiple times about the legalities of the special session.

“I asked for a special session in November. I was denied that by our governor. I went to court on three different occasions, was told I didn’t have legal standing. I have filed another suit just yesterday to see if I had legal standing because I want to get at the truth, and we have not done that yet here in Georgia,” Perdue said on Saturday.

The former senator also acknowledged that in “some areas” — such as coronavirus — “I think [Kemp’s] done an okay job,” less Kemp reopening the state after shutdowns a week earlier than Perdue believes the governor should have.

Perdue added, “This is not personal. … I like Brian. It’s just that he can’t win. He has not brought our party together, and if he were going to do that, he would have done it already.”