United Airlines CEO Scott Kirby has placed roughly 2,000 unvaccinated U.S.-based employees who obtained religious and medical accommodations on unpaid leave in the name of “safety.” That number includes approximately 900 flight attendants, according to Walker, who said her organization is currently undergoing an audit to confirm the exact numbers of United employees placed on unpaid leave and their positions.

Unlike other large airlines, Kirby’s vaccine mandate is devoid of a testing option. It stripped employees on unpaid leave of their benefits and has them reportedly struggling to find work due to a non-compete clause.

The mandate is the subject of an ongoing class-action lawsuit brought by six United Airlines employees, alleging that it violates Title VII of the Civil Rights Act of 1964 and the Americans with Disabilities Act of 1990 (ADA).

Breitbart News was able to obtain several schedule logs showing London-based flight attendants scheduled to fly with Newark-based crew in late December and early January. London-based United Airlines employees are not subject to Kirby’s vaccine mandate, meaning some could potentially be unvaccinated against coronavirus. Walker told Breitbart News that, to her knowledge, United Airlines never previously “mixed vaccinated, unvaccinated or London with the U.S. vaccinated employees,” but she noted that Kirby apparently does not have the same authority to make rules for employees under the jurisdiction of foreign governments. 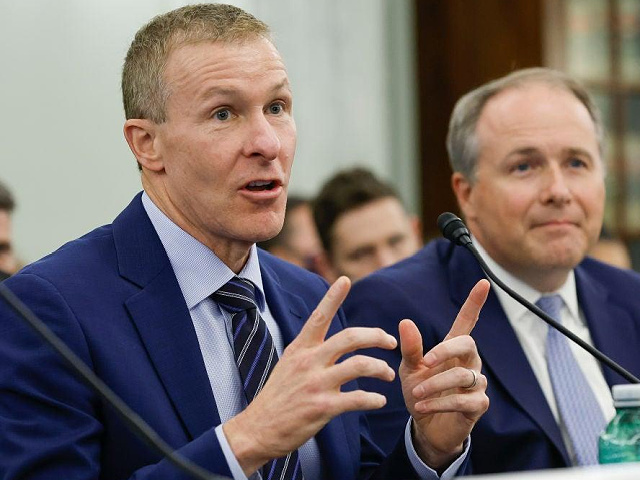 “Now they’re just so shorthanded, they can’t keep those people isolated together, so they are just mixing them up with crew back and forth across the pond,” Walker said.

With the new variant omicron sending health officials into a tizzy, airlines have canceled thousands of flights and grounded hundreds of planes due to an ongoing pilot shortage and staffing issues. United Airlines is no different, canceling hundreds of flights before and after Christmas.

“The nationwide spike in omicron cases has had a direct impact on our flight crews and the people who run our operation. As a result, we’ve unfortunately had to cancel some flights and are notifying impacted customers in advance of them coming to the airport,” United told the Hill.

But instead of calling back unvaccinated American staff currently on unpaid leave, Kirby reportedly decided to outsource the work to foreign employees who might also be unvaccinated.

“It is becoming obvious that CEO Kirby is willing to inconvenience you in an effort to coerce us to surrender our bodies or our faith for his hollow marketing ploy, and it has backfired. Over the past week, our coworkers are falling ill by the hundreds. United predicted this, sending multiple memos begging for overtime flight crews,” Walker said in a previous op-ed published to Breitbart News, responding to reports of canceled holiday flights. “Yet while United pleads for more employees to step up to help, the 2,000 of us are left sitting idle, willing and eager to serve you.”

Breitbart News reached out to United Airlines for confirmation that potentially unvaccinated London-based crew have been flying with America-based crew who are subject to mandatory vaccination. The company did not respond by the time of publication.

However, in mid-December, Kirby testified with several other airline CEOs before the U.S. Senate Committee on Commerce, Science & Transportation. All of the CEOs confirmed that they are undergoing staffing shortages, including an ongoing pilot shortage, which has resulted in hundreds of grounded planes. Both Sens. Marsha Blackburn (R-TN) and Ted Cruz (R-TX) grilled Kirby during questioning, asking him why he has placed pilots and flight attendants on unpaid leave and refused to offer a testing option to unvaccinated employees in light of the shortage.

“We believe [the mandate] saved lives. I think that’s my number one obligation is safety, particularly running an airline…” Kirby insisted, later telling Sen. Rick Scott (R-FL) that adding a testing option would be a “compromise” on safety. 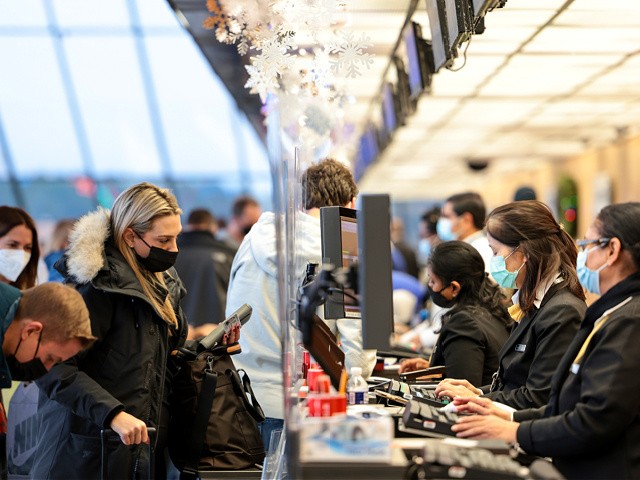 A woman checks in for her flight at a United Airlines kiosk at the Dulles International Airport on December 27, 2021, in Dulles, Virginia. (Photo by Anna Moneymaker/Getty Images)

But despite Kirby’s repeated claim that his mandate is all about safety, United Airlines has begun rolling back other coronavirus safety measures. Breitbart News obtained a Dec. 28 memo from United Airlines’ pilot union, United Master Executive Council, saying the airline “will no longer be conducting contact tracing for pilots who test positive for COVID-19” against the union’s “strong objection.”

“With this change in policy, pilots who test positive should ask the FO COVID Care Team for assistance informing any crew member close contacts if you develop symptoms and/or test positive within 48 hours after a trip,” the memo states.

The union sent the notice following an update to the airline’s safety procedures making return-to-work requirements “less stringent,” according to the union memo.

“Beginning December 27, pilots are only required to report … a positive COVID-19 test result/medical diagnosis from your physician [or] a household member’s positive test result IF the pilot also has symptoms of COVID-19,” according to the memo. “Also the return-to-work requirements after receiving a negative rest result (taken for symptoms) will no longer require a 10-day wait or clearance from Corporate Medical.”

A United employee, who will remain anonymous for fear of retaliation, reached out to Walker confirming the policy updates and saying they were told to come to work even though they had direct contact with their spouse who was sick with coronavirus.

“Basically, because you’re vaccinated — even though your [spouse] at the end of the sofa is coughing up a lung with COVID — [the airline does not] really care as long as you’re not exhibiting symptoms because we’ve got airplanes sitting everywhere,” Walker said.

Breitbart News also asked United to confirm its new safety policies for pilots and to give an explanation as to how the change fits the company’s definition of safety. The airline did not respond to that line of questioning either.

Walker said flight attendants on unpaid leave, while upset that potentially unvaccinated London-based crew are allowed to work while they sit at home, are “resolved” to “see out the court case.”

“Now, all of a sudden as this omicron spreads and the talk of boosters is out there … there’s a lot of folks knocking on our door …” Walker said. “We’re warriors. So we’re gonna just hang in here, and I think our people are a little bit more emboldened right now. They’re going to fight. They don’t want any settlements right now. They want to see how the court case plays out.”

In a two-sentence order in mid-December, a liberal panel of the conservative-leaning U.S. Court of Appeals for the Fifth Circuit rejected an emergency request by six employees to halt United Airlines from enforcing the company’s coronavirus vaccine mandate. However, the court also granted a motion to expedite an appeal in the case, which will be heard Monday.

Judge James Ho wrote in dissent that he agrees “with the district court that Plaintiffs’ claims ‘appear compelling and convincing at this stage.’”

“The person who acquiesces to United’s mandate despite his faith doesn’t lose any pay. But he will have to wrestle with self-doubt—questioning whether he has lived up to the calling of his faith,” Ho wrote. “Likewise, the person who refuses must also wrestle with self-doubt—questioning whether his faith has hurt his family, and whether living up to his commitments was worth sacrificing the interests of his loved ones.”