President Joe Biden and Vice President Kamala Harris plan to travel to Capitol Hill on Thursday to mark the one-year anniversary of the January 6th protests of the 2020 election outcome.

The two are planning speeches at the Capitol, capping a week of Democrat efforts to use the anniversary of the protests to sell the “insurrection” narrative, warning that former President Donald Trump and his supporters tried to topple American democracy on that day.

Biden has repeatedly referred to the rioting and protests that day as “one of the darkest days of our democracy.” 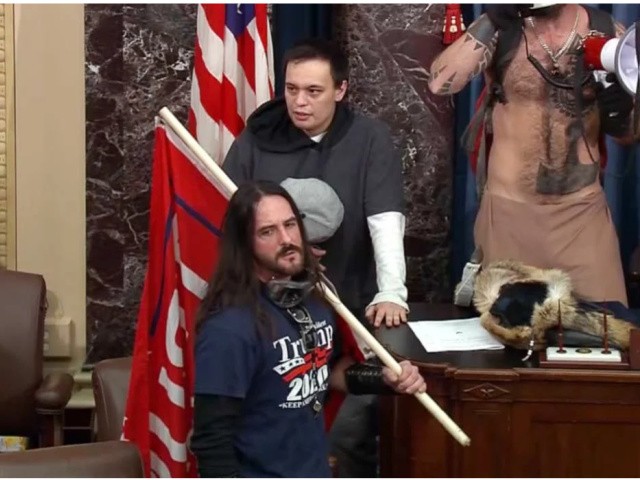 Paul Allard Hodgkins carries a large red “Trump 2020” flag inside the Senate chamber during the Capitol riot on Jan. 6. (Image via FBI)

“This was not dissent. It was disorder. It posed an existential crisis and a test of whether our democracy could survive — a sad reminder that there is nothing guaranteed about our democracy,” he wrote in July, commemorating the six-month anniversary of the riots.

Biden also claimed the protesters who stormed Capitol Hill were worse than the Confederates who fought in the Civil War.

“We’re facing the most significant test of our democracy since the Civil War. It’s not hyperbole — since the Civil War,” Biden said in a speech in July of last year. “Confederates, back then, never breached the Capitol as insurrectionists did on January 6.”

The U.S. Capitol is on lockdown after Trump supporters breached the building, breaking through barriers and clashing with police as lawmakers gather for a joint session of Congress to count and certify the electoral votes from the presidential election. https://t.co/8JBb9UWuId

Trump has also announced a press conference to mark the one-year anniversary of the protests at his club at Mar-a-Lago.

Trump plans to focus on the “rigged” 2020 presidential election and to make the case that the real “insurrection” was on Election Day.

“[R]emember, the insurrection took place on November 3rd, it was the completely unarmed protest of the rigged election that took place on January 6th,” Trump wrote in a statement, claiming evidence of voter fraud in Pennsylvania, Arizona, Georgia, Wisconsin, and Michigan.