CLF, which is the House Republican super PAC endorsed by Minority Leader Kevin McCarthy (R-CA), Whip Steve Scalise (R-LA), and all of House GOP Leadership, along with AAN, which is a 501(c)(4) ‘action tank’ to promote center-right policies, announced their combined $110 million smashed their previous record of $66 million between the two groups.

Additionally, going into the election year, where Republicans and Republican-aligned groups are looking to take back the House from the Democrats, CLF announced that the organization alone more than doubled its prior off-year fundraising record of  $32.6 million in 2019 by raising $65.5 million in 2021. 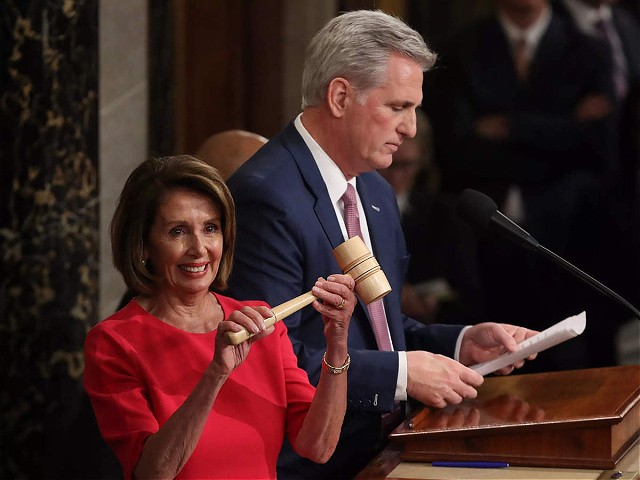 Speaker of the House Nancy Pelosi (D-CA) smiles after receiving the gavel from Rep. Kevin McCarthy (R-CA) following her election as the next Speaker of the House during the first session of the 116th Congress at the U.S. Capitol January 03, 2019, in Washington, DC. (Photo by Win McNamee/Getty Images)

Furthermore, the House Republican super PAC says they have $61.18 million cash on hand, a 218 percent increase from its previous off-year cash on hand record of $28 million.

“We’ve shattered every record this year, which is a testament to the turbo-charged enthusiasm behind our effort to win the House and stop out-of-control Democrat rule,” said CLF President Dan Conston. “CLF heads into 2022 with the beginnings of a war chest and firepower to expand the battlefield deep into Democrat territory and win the Majority for Republicans.”