President Joe Biden’s approval rating among black registered voters in Georgia has dropped nearly 30 percent since last May, according to a poll published this week by the Atlanta Journal-Constitution.

The approval numbers represent a deep 28.4 percent dive over the AJC’s last poll measuring Biden’s approval, which was conducted last year from April 20 to May 3.

In terms of disapproval numbers, the recent January poll found 36.3 percent of black respondents disapprove of Biden’s job handling, a 27.9 percent increase over last May when 8.4 percent said they disapproved of his job handling.

President Joe Biden's approval rating has tumbled among Black voters, and that could spell trouble for Democrats. However, frustration with Biden doesn’t appear to have weakened support for Stacey Abrams and U.S. Sen. Raphael Warnock.https://t.co/YHyfG9PX4e

The January poll weighed top issues for voters, and among black voters, 31.1 percent said the “single most important issue facing Georgia today” is “elections/voting.” Other top issues included the “pandemic” at 19.6 percent, the “economy/jobs” at 15 percent, “other” at 9.4 percent, and “crime/public safety” at 8.4 percent.

As far as election laws, Georgia became ground zero on the issue after its last few highly competitive elections garnered national attention and were dominated by narratives about voter suppression and voter fraud.

Georgia Gov. Brian Kemp (R) was the first governor after the 2020 presidential election to pass a voting overhaul bill, which aimed to improve election integrity and tightened certain aspects of the voting process like voter ID requirements and the quantity of ballot drop boxes. The bill was met with high praise from conservatives but disapproval from Democrats, including from Georgia Democrat voting rights activist Stacey Abrams, who repeatedly claimed without evidence that the bill would suppress the votes of racial minorities.

At the federal level, Democrats in D.C. have vowed to pass sweeping election reform legislation to standardize certain aspects of the election process across all states and, in effect, nullify parts of laws like the one in Georgia. However, because there is little to no Republican support for the effort, Democrat voting bills have failed multiple times in Senate votes and currently show no sign of future passage. 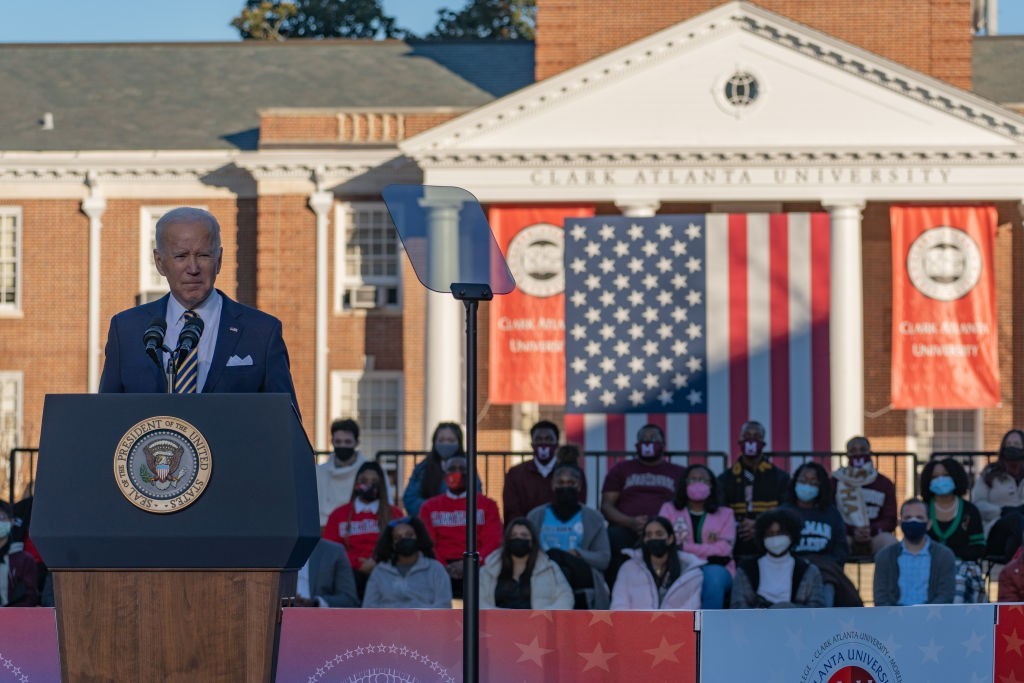 The AJC reported that from interviews with black Georgians, it gathered that the reasons for the decline in support for Biden from black voters “vary,” and added that those reasons “include his failure to overcome Republican filibusters of voting rights legislation, his handling of the pullout of troops in Afghanistan and an inability to deliver on campaign promises such as reducing student loan debt.”