House and Senate Democrats are on “suicide watch” as President Joe Biden is currently on pace to break his own illegal immigration records, a new analysis suggests.

In 2021, Biden set new records for illegal immigration by enticing more than two million border crossers and illegal aliens to take the often deadly journey through Mexico to the nation’s southern border in the hopes of being released into the U.S. interior.

“The trend is clearly headed in the wrong direction,” Kopits wrote at the time.

Now, based on January’s illegal immigration levels, Kopits is projecting that Biden will break his own record set last year by bringing 2.1 million border crossers and illegal aliens to the U.S.-Mexico border. 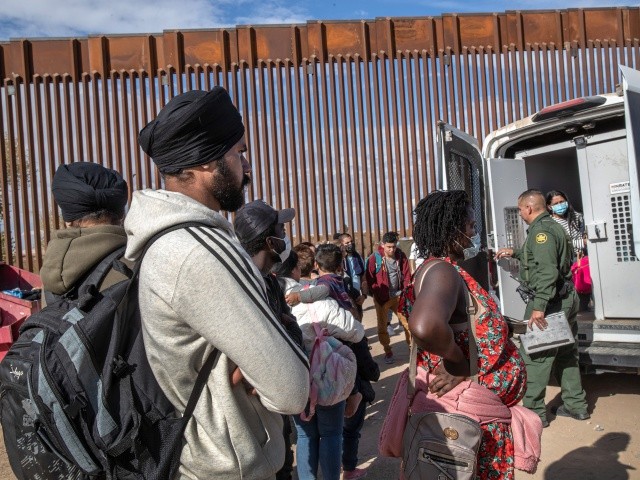 Immigrants from India and Haiti wait with others to be transported to a U.S. Border Patrol processing center on December 09, 2021, in Yuma, Arizona. (John Moore/Getty Images)

“Our forecast of a record 2.1 million apprehensions for fiscal and calendar year 2022 remains unchanged,” Kopits writes. “… Democrats should put themselves on suicide watch, and indeed, they are, with the number of House Democrats not seeking reelection this year at a 30-year high.”

The latest figures indicate the rate at which Biden’s top agency officials are releasing border crossers and illegal aliens into the U.S. interior.

As Breitbart News reported, in the month of January, the Department of Homeland Security (DHS) released into the U.S. interior more than 62,500 border crossers and illegal aliens — a foreign population more than twice the size of Princeton, New Jersey; nearly twice the size of Lexington, Massachusetts; and more than six times the size of Jackson, Wyoming.

“What is happening at the southern border is without precedent in American history,” Federation for American Immigration Reform (FAIR) President Dan Stein said in a statement. “President Biden has abandoned his core responsibility to ensure the integrity of our nation’s borders.”