Public polling on His Fraudulency Joe Biden’s inept mishandling of the crisis in Ukraine could not be worse or more justified.

Rasmussen Reports asked 1,000 likely voters, “How do you rate the way President Biden has handled the Russian aggression towards Ukraine?” Nearly two-thirds, a full 64 percent, rated him negatively:  “fair” (15 percent) and “poor” (49 percent.)

On the overall issue of handling national security, a majority of 51 percent rate Biden as straight-up “poor,” while another 13 percent rate him “fair” Only 33 percent rated Biden as “excellent” (18 percent) or “good” (15 percent).

These numbers must be something close to a record low for a U.S. president in the early stages of an international crisis. Throughout modern history, Americans have rallied around the flag and our commander-in-chief during these difficult moments. The creep of time can eventually undermine this support. But in the early days, we tend to give the president every benefit of the doubt. 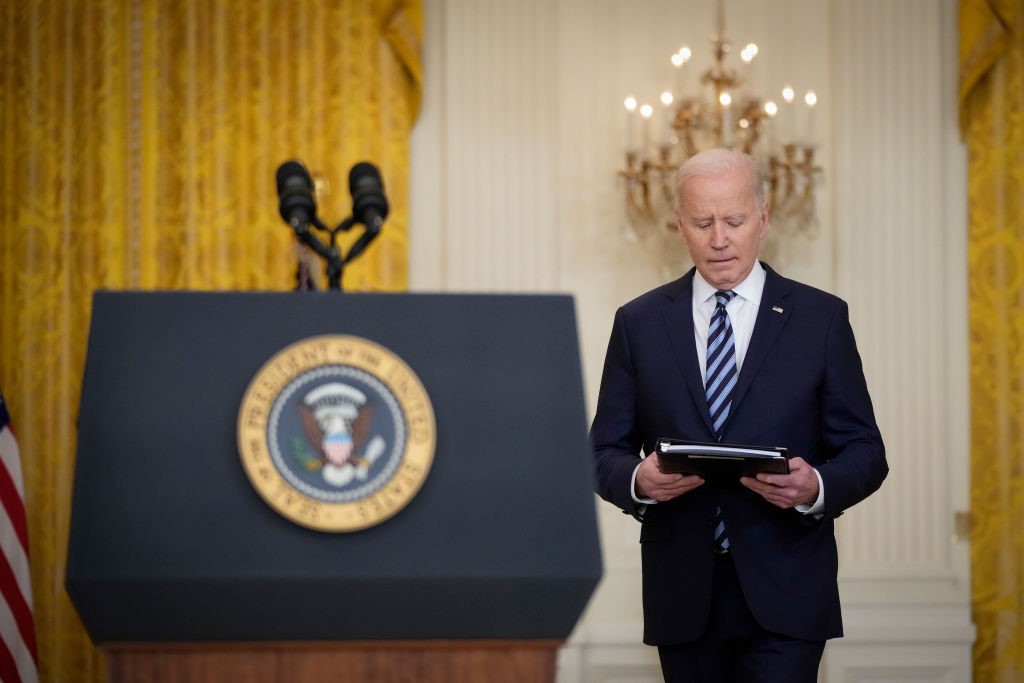 The problem for Biden is that he has botched the Ukraine crisis so thoroughly even much of his own party is refusing to rally.

On the specific question of his handling of Ukraine, an astonishing 40 percent of Democrats rate him “fair” (18 percent) to “poor (22 percent).

On overall national security, 37 percent of Democrats rate him “fair” (16 percent) to “poor” (21 percent). Typically, you never see those kinds of numbers within a president’s own party.

The problem for Biden, though, is that you would have to be struck blind, deaf, and dumb to ignore just how inept he’s been.

One day Her Vice Fraudulency Kamala Harris assures the world sanctions will deter the Russians from invading Ukraine. The next day, after the invasion has begun, Biden is laughing at the idea sanctions would have stopped the invasion.

Most stupidly, Biden put all his “political success” eggs in the basket of deterring Putin. In an effort to appear engaged, competent, conscious, and in charge, the White House and its lackey media assured us Biden was in constant contact with Russian President Vladimir Putin. And what was the result? Putin still invaded.

That’s just dumb politics. When your job approval ratings are already threatening to sink into the thirties, you don’t push all your chips into the middle of the table. You don’t puff up your chest and essentially say, Don’t worry. I got this.

I think, too, that most people understand that Biden’s obscene withdrawal from Afghanistan emboldened Putin, as did Biden’s decision to cancel our oil pipeline and okay Putin’s.

Finally, there’s just the awful spectacle of a president who is not mentally or physically up to the rigors of managing a crisis, most especially one of this magnitude. During his recent public appearances, Biden is the opposite of what Americans and the world need: firm steadiness. Instead, Biden is Biden: diminished, sundowning, unsure, halting, slow, distracted, and weak.

Biden is not up to the job and the American people, including a huge chunk of his own party, knows it.