Former President Donald Trump weighed in Saturday on the Georgia legislature’s Buckhead City proposal, calling for state lawmakers to revive the popular bill, which is currently tabled indefinitely, and using the issue as a means to reiterate his grievances with Gov. Brian Kemp (R) over the 2020 election.

Trump pointed to Atlanta’s rise in violent crime as reason to “let the voters decide” on the wealthy Buckhead neighborhood’s deannexation from Atlanta, which would allow Buckhead to establish its own police department.

“What is happening in the City of Atlanta is nothing short of disgraceful. It’s national news and a regional embarrassment. The good people of Buckhead don’t want to be a part of defunding the police and the high crime that’s plaguing their communities,” Trump said in a statement.

The grassroots movement to carve the affluent suburban district of Buckhead out of the city of Atlanta has been on and off for at least a decade, but an increase in certain violent crimes in the city — specifically in homicides and aggravated assaults in 2020 and 2021, as compared to 2019 — and a disapproval of former Mayor Keisha Lance Bottoms’ (D) inability to address that crime spike contributed to the cityhood movement gaining momentum over the past year.

The initiative gained substantial enough traction that two bills were formally introduced by Republicans into the Georgia legislature this session, one in the House and one in the Senate, that would allow a ballot referendum in November for Buckhead residents to vote on if they want Buckhead to separate from Atlanta and become its own city.

Lt. Gov. Geoff Duncan (R), the Senate president who has long opposed creating a Buckhead City, moved the Senate bill into a committee controlled by Democrats last month, however, and that seemingly dealt a fatal blow to the effort, at least for this year, because of Democrat opposition to the measure.

House Speaker David Ralston (R) responded to the move by saying he “respecte[d]” Duncan’s decision and that he would not pursue the matter further from the House side.

“We’re in a pause mode. I and others have put out some important questions that have not yet been answered,” Duncan told the Atlanta Journal-Constitution this month. “What is the strategy to stem crime? What is the strategy to deal with Atlanta public schools in the city’s footprint? What are the finance ideas around the bond package?” he continued. “Those questions haven’t been answered.”

Duncan also said he wants to give Andre Dickens (D), who became the new mayor of Atlanta in January, time to address the Buckhead crime concerns.

Bill White, who is leading the cityhood effort, countered on Breitbart News Saturday last weekend that Duncan is “out to lunch” and that after close to two months in office, Dickens has not demonstrated that he adequately supports law enforcement, that crime is off to a “worse start,” and that the Atlanta police force is understaffed. 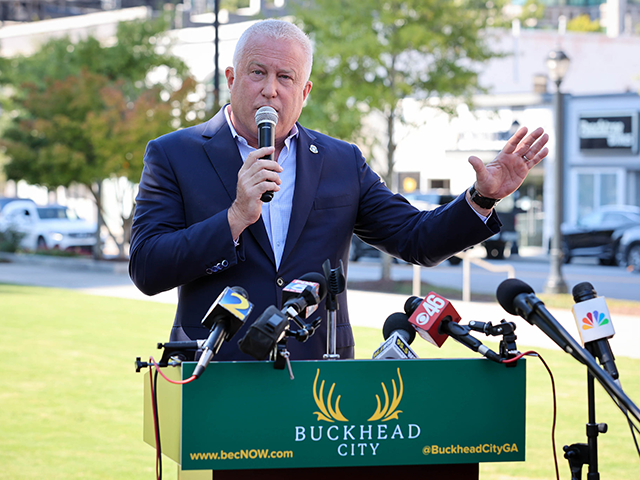 Violent crime so far in Atlanta as a whole has not shown signs of improvement, according to Atlanta Police Department data through February 19. Violent crime data for “Zone 2” of the sprawling city, which is where Buckhead is located, shows a mixed trend however. While homicides and aggravated assaults are down compared to this time last year, rape is up, with the police documenting seven rapes in Zone 2 compared to two this time last year.

Kemp, for his part, has stayed neutral as local leaders duke out the cityhood issue, saying during an interview on Breitbart News Saturday last weekend, “You’ll be glad to know, we passed a bill last year that doesn’t allow rogue local governments to defund the police, and that’s one of the reasons it’s good this debate’s going on and why I haven’t interfered one way or another, is the mayor needs to feel the pressure on this issue,” Kemp said. “You know, I’ve spoken to him directly and told him people are fed up. You’ve got to do some police work,” the governor added. 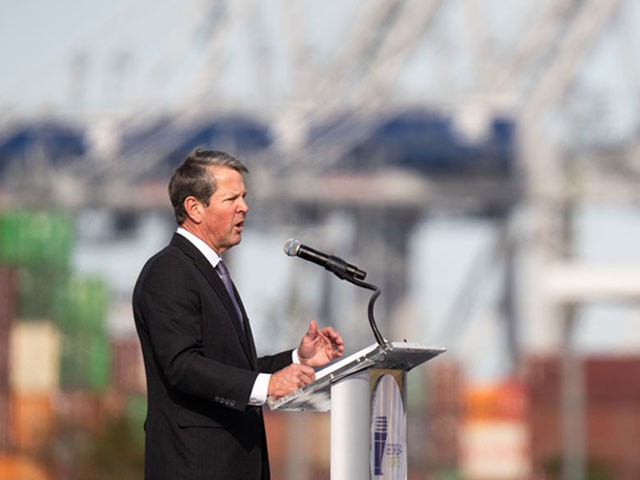 In Trump’s statement on Saturday, the former president took aim at Kemp for the dormant Buckhead bill, and also singled out Ralston, Duncan, and three specific state senators:

RINOs like Governor Brian Kemp, the man responsible, along with his puppet master Mitch McConnell, for the loss of two Senate Seats and 2020 Presidential Vote, Lt. Governor Jeff Duncan [sic], Speaker David Ralston, and State Senators Butch Miller, Jeff Mullis, and John Albers always talk a big game but they don’t deliver. What good is having Republican leaders if they are unwilling to fight for what they campaigned on? Every RINO must go! Let the voters decide on the very popular City of Buckhead proposal!

Trump, in his quest to see Kemp unseated, is backing Kemp’s leading primary opponent, former Sen. David Perdue (R-GA), in the race for Georgia governor this year, as well as backing state Sen. Burt Jones, a Republican running in the race for lieutenant governor against Miller.

Mullis, who is backing Kemp and Miller in their races rather than Trump’s candidates, told Breitbart News he in fact supports the Buckhead City bill and that he believes the former president is misinformed.

“The Buckhead City movement is something I have been consistently supportive of and any comment to the contrary is categorically false,” Mullis told Breitbart News in a statement. “I will continue to support Governor Brian Kemp, Senator Butch Miller and the others that are focused on governing our State.”

“It appears the former president received some ‘fake news’ from bad actors on this issue,” Mullis added.

Kemp’s spokesman Cody Hall responded to Trump’s attack in his own statement Saturday afternoon, defending Kemp’s efforts at the state level to address violent crime and noting Kemp did not have “the legal authority” to pass a proposal for a ballot referendum independently of the state legislature:

Governor Kemp signed legislation to prevent rogue local governments from defunding their police in 2021, and created the Crime Suppression Unit to go after violent criminals and street racers in Atlanta in the absence of serious action from previous elected city leadership. That unit is responsible for 384 wanted persons arrests – including 23 murder suspects – 121 stolen weapons recovered, over 1,100 vehicles impounded, and nearly 700 drug or DUI arrests.

Per the Constitution and laws of the State of Georgia, a measure like the Buckhead City proposal must be passed through the state legislature. The Governor does not have the legal authority to place a local cityhood referendum on the ballot.

In a Trafalgar Group poll taken February 11–13, Kemp was leading Perdue in his primary race by about ten points.

A stunning majority of respondents, 75.1 percent, in that same poll were however also in favor of their state representatives supporting the Buckhead ballot referendum proposal.