Chairman of the Buckhead City Committee Bill White criticized Georgia lawmakers for shelving a plan to place the deannexation of Buckhead from Atlanta on the ballot in 2022, saying “we simply just want to right to vote.”

“And some of those people will vote no — but 75 percent want the vote,” White said during an interview on Breitbart News Saturday, referring to a recent Traflagar poll showing the measure’s popularity. “So Senator Albers (R) needs to drop the bill and put the personal problems behind. People are depending on this, and Speaker Ralston (R) needs to allow this to proceed in the House.”

“I call on Albers to drop the bill because if the Senate moves, then the speaker said he would move,” he continued.

White has been spearheading the most recent grassroots effort to deannex Buckhead City from Atlanta. The movement has been gaining more traction than in the past — the bill’s sponsor Sen. Brandon Beach (R-Alpharetta) said he has “never seen” so much support for the measure.

White said the movement has gotten so popular because of rising crime rates in Atlanta.

“I hate to say this, but in the first 60 days of Andre Dickens mayoralty, it’s off to a worse start. We had shootings in Buckhead go up 164 percent under Bottoms, and murder up over 90 percent under Mayor Bottoms,” White estimated. “And then she fired police officers who were just doing their jobs, without due process, and we broke the sacred trust of our relationship with our brave men and women in blue.” 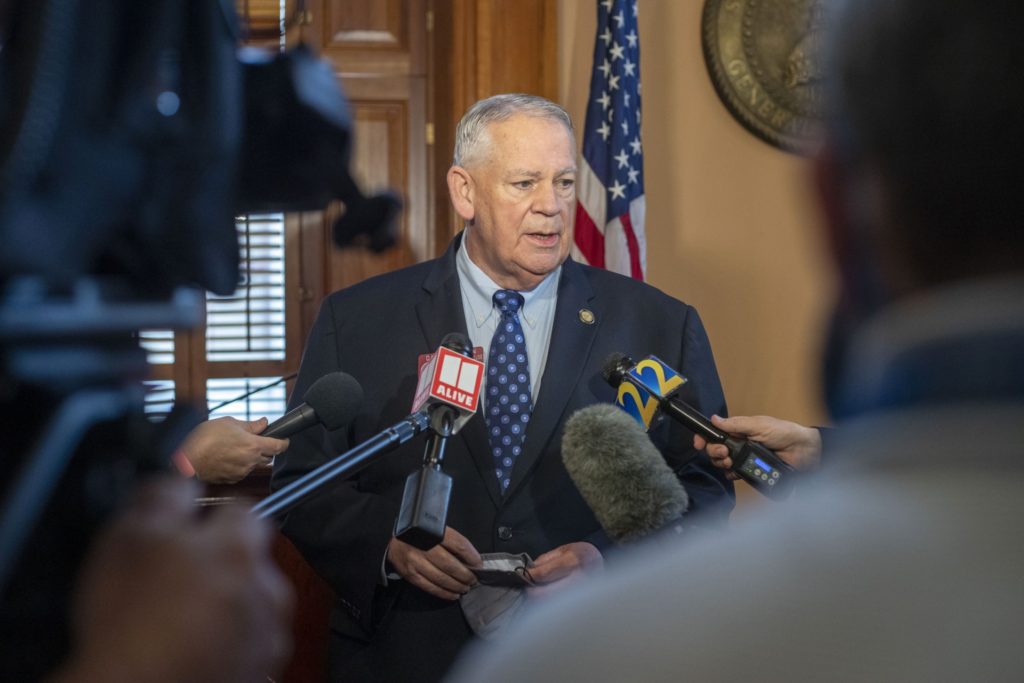 According to White, 300 police officers have quit in the past 18 months, a problem compounded by new Mayor Andre Dickens (D), who has a history of supporting the “Defund the Police” movement. White estimated the Buckhead, with a population of roughly 108,000, has under 20 police officers on the streets at any given time and 90 officers total — much lower than the Department of Justice’s recommendation of 270 for a population of that size.

If lawmakers voted to allow the measure on the ballot, and residents voted to deannex from Atlanta, the town would be able to establish its own police department. White said Buckhead is ready to employ 250 police officers to serve the city.

“We are speaking a different language. We are supporting our cops, we are loving our cops — we are going to cherish them,” he said, before listing several recruiting tools Buckhead would use to draw in quality talent. Some measures include concierge medical service, high starting salaries, a stipend to live in Buckhead, and take-home cars.

“Good luck to the criminals coming here to commit crime. Police deterrent is the answer,” he added.

Buckhead has often been ranked one of the wealthiest communities in the south and is home to an abundance of expensive retail, shiny new office buildings, and upscale neighborhoods. An Atlanta Journal-Constitution analysis assessed that a hypothetical Buckhead City would be 74 percent white and have an average median income of around $140,000, and that the city would take with it about 40 percent of Atlanta’s entire value.

“This is the height of corruption that you see under the Gold Dome in Atlanta, Georgia,” Perdue said. “They’re so afraid of the connection between big business and the politics of that city that they don’t want to take a chance on that.”

Duncan, who is the Senate president, told the the Atlanta Journal-Constitution this month that too many planning questions remain unanswered, including how bond ratings would affect city development and state taxpayers once the affluent neighborhood is carved out of Atlanta.

House Speaker David Ralston (R) has been more passive on the matter, saying he “respect[s]” the Senate’s decision to table the bill.

Current Gov. Brian Kemp (R) offered his own opinion on the bill during his own interview with Breitbart News Saturday, saying he wants to see a healthy debate in the state legislature play out and that it will allow the new Atlanta mayor, Andre Dickens (D), to “feel pressure” to stem Atlanta crime, which is the driving reason for the Buckhead separation movement.

White noted that Democrat Stacey Abrams has “already announced she would veto such a bill” if she was elected governor.

“We don’t have time,” he said, adding that Buckhead will see a “mass exodus” if crime continues to rise. “So lives, property, commerce, [and] quality of life [are] all at risk.”

Ashley Oliver contributed to this report.