Former Attorney General William Barr writes in his new book that former President Donald Trump is to blame for the January 6 Capitol Hill riot as he calls for a new 2024 nominee.

In his upcoming 600-page book profiled by the Wall Street Journal, Barr argues that former President Trump has “shown he has neither the temperament nor persuasive powers to provide the kind of positive leadership that is needed.” Barr even goes as far to say that Trump could have won the 2020 election if he had “just exercised a modicum of self-restraint, moderating even a little of his pettiness.”

“The election was not ‘stolen,’” he asserts in the book, titled One Damn Thing After Another. “Trump lost it.”

Barr advises that Republicans look to “an impressive array of younger candidates” for the 2024 election to avoid the pitfalls of the former president’s “erratic personal behavior.” 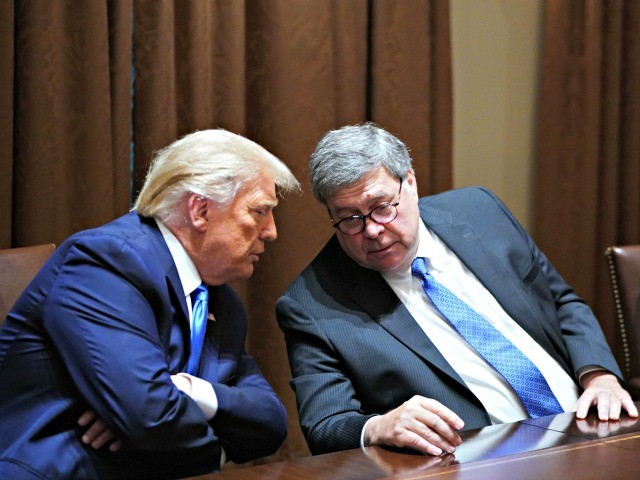 U.S. Attorney General William Bar and U.S. President Donald Trump speak during a discussion with state attorneys general on protection from social media abuses in the Cabinet Room of the White House in Washington, DC, on September 23, 2020. (Photo by MANDEL NGAN/AFP via Getty Images)

Barr also profiles a meeting he had in the Oval Office after he declared publicly that widespread evidence of voter fraud in the 2020 election did not exist.

“’This is killing me—killing me. This is pulling the rug right out from under me,’” Barr claims Trump shouted at him. “He stopped for a moment and then said, ‘You must hate Trump. You would only do this if you hate Trump.’” Per the Wall Street Journal:

Mr. Trump then launched into a list of other grievances he had with his attorney general: that the federal prosecutor Mr. Barr ordered to review the origins of the Federal Bureau of Investigation’s Russia probe that preceded the Mueller report hadn’t released his findings before the 2020 election, and that Mr. Barr declined to prosecute former FBI Director James Comey after a department watchdog rebuked him for sharing memos that contained sensitive information about his interactions with Mr. Trump, a complaint brought up repeatedly by the president.

Barr claims he offered his resignation at that moment, which the president accepted. “Leave and don’t go back to your office. You are done right now. Go home!” Barr asserts Trump told him.

Regarding January 6, the former attorney general said that Trump lost himself after the election and pushed the voter fraud to such an intense degree that it led to the riot on Capitol Hill.

“The absurd lengths to which he took his ‘stolen election’ claim led to the rioting on Capitol Hill,” he writes.

Whether or not Republicans ultimately choose to follow Barr’s advice remains to be seen; for now, the former president enjoys overwhelming support for the 2024 nomination according to various polls. This past weekend, Trump handily won the CPAC straw poll by 59 percent.