Turkish-made Bayraktar armed drones have proven to be a key weapon in Ukraine’s arsenal against the Russian invasion, helping the defenders take out armored vehicles, eliminate artillery positions, and disrupt supply lines.

🇺Ukrainian Bayraktar TB2 has killed yet another Russian BM-21 Grad, now in Kyiv Oblast.
Wishing the best to the drone operators — they have probably saved a lot of civilian lives in Kyiv today.https://t.co/GLRPBVyQli

Another clip was described by Sky News on Tuesday as a Bayraktar taking out a Russian Buk surface-to-air missile launcher – the same weapon employed by Russia-backed separatists in eastern Ukraine to shoot down a Malaysian airliner in 2014, killing 283 passengers and 15 crew members:

Ukraine has released footage of what it is says is an attack that destroyed a Russian Buk surface-to-air missile system outside of Kyiv.

The army said the strike was carried out by a Bayraktar drone.

The footage that really caught the world’s attention, posted over the weekend by the Ukrainian Embassy in Turkey, allegedly showed Bayraktar drones crippling a Russian military convoy:

“Never a rose without a thorn,” the Ukrainian embassy taunted, describing the convoy strike as “divine justice” for Russia killing 34 Turkish soldiers in an airstrike on Syria exactly two years ago.

Numerous analysts pointed to this clip as a game-changer as more than a dozen Russian vehicles were evidently destroyed in the strike. Some observers nervously pointed out that terrorists like the Iran-backed Houthi insurgents of Yemen are developing proficiency with drone warfare. They could do a lot of damage if they got their hands on equipment as affordable and sophisticated as the Bayraktar, which seems capable of evading Russian surface-to-air defenses and might be equally good at slipping past American defense systems like the Patriot missile.

Turkey’s Bayraktar TB2 drone is a bestselling military export prized for its low cost and high reliability. The drones made a big splash in 2020 during Turkey’s intervention in the Libyan civil war and Azerbaijan’s battle with Armenia in the Nagorno-Karabakh region. The Russian-allied Armenians were reportedly stunned by the effectiveness of the Bayraktar drones in Azerbaijan’s inventory.

Besides their remarkable cost-effectiveness, with a price tag less than five percent of what a manned top-shelf warplane would cost, Bayraktars require relatively small launchers, making the system highly mobile and capable of rapid deployment.

The Ukrainians themselves praised their drone strikes as “the jewelry work of Bayraktar TB2 crews.” Ukraine’s ambassador to Turkey, Vasyl Bodnar, said on Sunday that the drones have proved a “highly efficient” weapon against Russian forces.

Independent military analysts told Bloomberg they were surprised Russia would leave its forces so exposed to a weapon the Armenians must have warned them about. The drones were also used successfully against the Russia-backed separatists in the Donbas region.

Putin harangued Erdogan for selling drones to the Ukrainians in a December 2021 phone call, claiming Ukraine was using the Bayraktars for “provocative activity.” 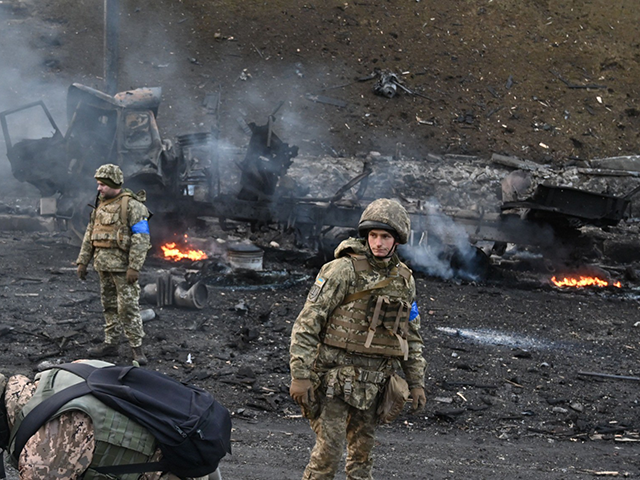 Ukrainian service members look for and collect unexploded shells after a fight with a Russian raiding group in the Ukrainian capital of Kyiv on the morning of February 26, 2022, according to Ukrainian service personnel at the scene. (Photo by SERGEI SUPINSKY/AFP via Getty Images)

The Turkish government responded that Turkey has no control over how its drones are used, and has no intention to stop selling them.

Ukraine signed a batch of trade deals with Turkey in early February that included expanded production capacity for drones, and a training center for their operators, on Ukrainian soil.

“Baykar will expand its production of unmanned aerial vehicles in Ukraine, and Ukraine will strengthen its defense capabilities with these new technologies and jobs,” Ukrainian President Volodymyr Zelensky said at the time.

“This will, in fact, be the Ukrainian-Turkish Bayraktar in terms of technological content. Well, accordingly, they will be used in the armed forces of Ukraine and Turkey, and those countries that will be willing to buy them,” Reznikov said in February.

Ukraine is currently believed to have about two dozen Bayraktar systems in its inventory. The standard configuration for one system includes six unmanned aerial vehicles and two ground control stations, so the total number of drones Ukraine can put in the air could be considerably higher.

Poland also purchased Bayraktar drones from Turkey in the summer of 2021, acquiring a fleet comparable in size to Ukraine’s and drawing some criticism from NATO because the deal could antagonize Russia.

Germany’s Deutsche Welle (DW) said Poland’s Bayraktar buy was “also a snub to the Biden administration after what is seen in Warsaw as Washington’s renewed cozying up to Berlin over the Nord Stream 2 gas pipeline.”

“It seems that by this transaction Poland is trying not only to strengthen its relationship with Turkey, but also to make it more tied to the security of NATO’s eastern flank, as well as to drive a wedge between Turkey and Russia, at a time when that relationship is very complicated,” Turkey analyst Karol Wasilewski of the Polis Institute of International Affairs remarked to DW.