Israeli Prime Minister Naftali Bennett on Sunday said Israel was “concerned” over the prospect of the U.S. removing Iran’s Revolutionary Guard Corps (IRGC) from the terror list amid a renewed nuclear deal with Iran.

“I hope the U.S. will hear concerned voices in the region, from Israel and others, on this issue,” he said.

Earlier in the day he said, “The idea that this organization will be removed from the terrorist list, from the FTO, is very disturbing and not just to us. We are still hoping and working toward preventing this from happening.”

The Islamic Republic has demanded the IRGC be delisted from the U.S. Foreign Terrorist Organizations (FTO) as part of its terms for the deal.

Bennett also thanked Blinken for his efforts “to further and expand” the Abraham Accords, which the Trump administration spearheaded with the normalization of ties between Israel and four Arab Muslim countries.

“The Middle East is changing and it’s changing for the better,” Bennett said. “We’re working together to overcome the forces of darkness and build a new future.”

Addressing the issue of Iran, Blinken said: “Deal or no deal, we will continue to work together and with other partners to counter Iran’s destabilizing behavior in the region,” he said.

Blinken avoided answering directly when asked by a reporter whether the U.S. considered the IRGC to be a terror organization, saying it “is probably the most designated organization in one way or another in the world among organizations that we designate, including the foreign terrorist organization designation.”

At a briefing with Israeli Foreign Minister Lapid, Blinken said the U.S. and Israel saw “eye to eye” when it came to preventing Iran from obtaining nuclear weapons.

“Whether there’s a JCPOA or not, Our commitment to the core principle of Iran never acquiring a nuclear weapon is unwavering,” Blinken said. 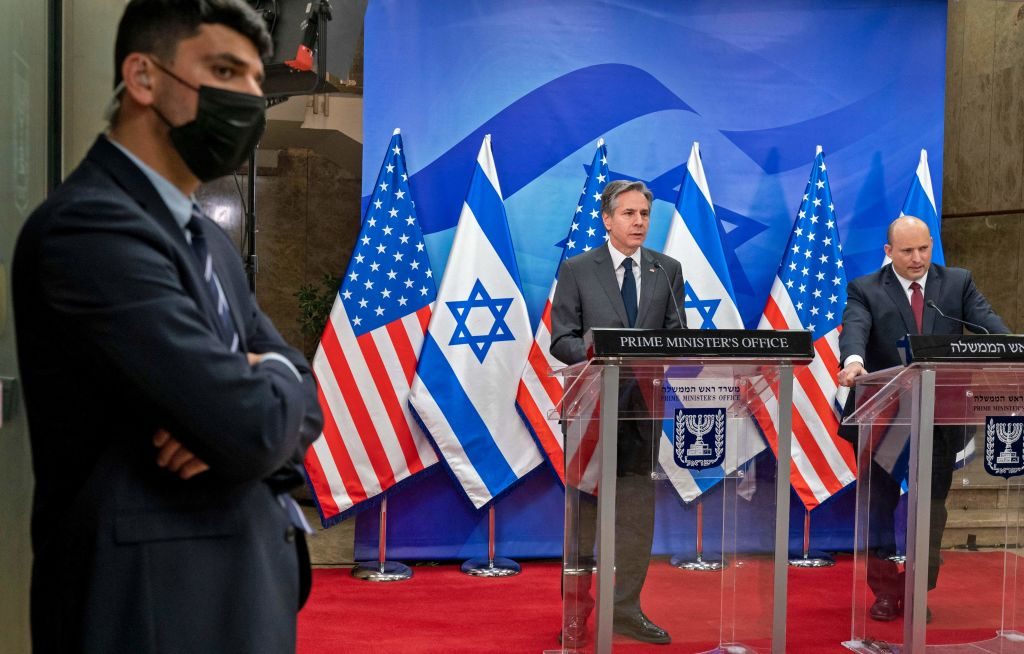 Israeli Prime Minister Naftali Bennett (R) and US Secretary of state Antony Blinken address the media following their meeting at the prime minister’s office in Jerusalem, on March 27, 2022. ( JACQUELYN MARTIN/POOL/AFP via Getty)

Lapid was more ambiguous in his remarks.

“We have disagreements about a nuclear agreement and its consequences, but open and honest dialogue is part of the strength of our friendship,” Lapid said.

“Israel will do anything we believe is needed to stop the Iranian nuclear problem program. Anything from our point of view, the Iranian threat is not theoretical, the Iranians wants to destroy Israel. They will not succeed. We will not let them,” he added.

Blinken denounced Tehran’s “destabilizing activities in the region and beyond,” which he noted had increased since the U.S. pulled out of the nuclear deal in 2018.

His remarks came ahead of an historic summit hosted by Israel attended by top diplomats from the United Arab Emirates, Bahrain, Morocco and Egypt.

“I have no doubt that the heroic national resistance of Iran is going to compel the future U.S. government to bow… and the sanctions will be broken.” https://t.co/lKy6pbFp7P

Egypt was the first Arab country to make peace with Israel in 1979, though relations have been lukewarm at best. Since normalizing ties with three of the four other countries in 2020 as part of the Abraham Accords, Israel’s relations with its southern neighbor have improved drastically.

The summit “would have been unimaginable just a few years ago. What we’re seeing is normalization becoming the new normal for this region and I think it’s going to attract more and more countries as they see the benefits of these partnerships among so many of the leading countries of the region,” Blinken said.