White House press secretary Jen Psaki leaves her job Friday, and while she departs amidst the praise of the press corps, she is also departing after her boss has dropped from 20 points net positive approval to 12 points net negative approval in the polls.

In these deeply divided times, it might be expected that presidents would be disliked by a significant portion of the country, regardless of performance. That is what happened to President Donald Trump, whose successes are clearer to his critics in hindsight.

But Biden came in with at least some Republican support. Biden managed to alienate them — and Psaki could not save him.

Instead, she gave glamorous interviews to Vogue — violating the unwritten rule that staffers should never steal the limelight from the boss. She is getting out in time to save her career, leaving the mess to the first black LGBT woman to hold the job.

The best that can be said about Psaki is that without her, President Joe Biden’s disapproval might have been worse. She was easily the most competent visible member of the Biden administration — though that is a very low bar to clear these days.

Among her good points: Psaki held regular press briefings, unlike some of her predecessors, including one who is trying to sell a book about how terrible President Donald was for elevating her from obscurity.

But Psaki should not get too much credit for that, any more than a sprinter gets credit for a world record with a strong wind at her back.

Trump’s last press secretary, Kayleigh McEnany, was at least as sharp and prepared as Psaki was, but had to face a hostile audience every day.

Psaki also gave Fox News’ Peter Doocy an opportunity to ask questions. It was the least she could do for the number one cable news network, but more than other Democrats wanted her to do — or late-night liberal comedians, for that matter.

But on the negative side, Psaki brought with her all of the bitterness of the tearful, frowny-faced Obama staffers who pouted at the new of Trump’s victory on that famous November morning in 2016. 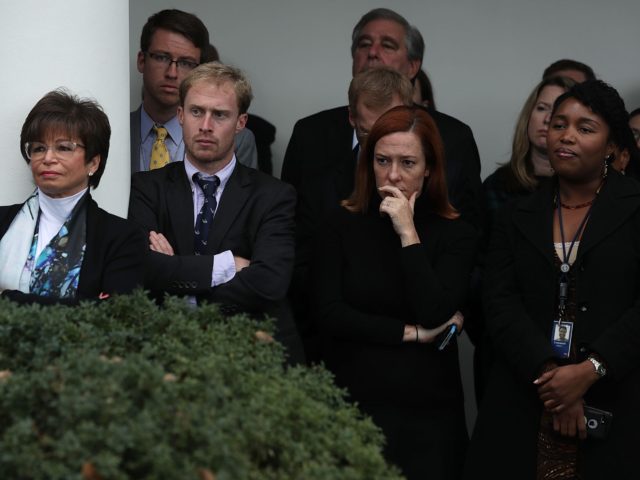 She could not bring herself to give him credit for the rapid development of the coronavirus vaccine. She repeated anti-Trump hoaxes, such as the “injecting bleach” hoax. And in her last days on the job, she defended the absurd claim that “MAGA” is the most extreme movement in recent U.S. history.

She did all of that while still touting Biden’s claims to be unifying the country. “You can do both,” she said, by which she meant that it was possible to unite the country, as long as everyone agreed with whatever Biden and his party wanted to do.

The most bizarre thing was how Psaki arrived at the job at all.

She had coveted the position during the Obama administration but was passed over for the entirely forgettable Josh Earnest — one of several bland white males who held the position under Obama.

Psaki honed her skills at the State Department instead, where she pioneered the use of “hashtag diplomacy,” one of many tepid efforts by Democrats to respond to foreign aggression on social media, which probably emboldened our enemies.

For all her talk of “systemic racism,” Psaki got the job rather than Symone Sanders, the formidable black woman who did the hard work for Biden in the 2020 primary — defending his debate flubs in the spin room, trudging through frigid Iowa when he fell outside the top three, even tackling a would-be protester at a Super Tuesday rally.

In contrast, Psaki sat out the 2020 campaign. Her most important contribution was to declare on CNN that Biden was “out of touch” with the American electorate — a remarkably accurate and honest assessment, which has remained true throughout his presidency.

Like Rahm Emanuel, the chief of staff who quit the Obama administration shortly before the “shellacking” of the 2010 midterm election, Psaki is leaving the Biden administration at its lowest point — when babies are literally going hungry.

Psaki’s successor, Karine Jean-Pierre, is an incompetent radical who could not explain to reporters this week who, exactly, is in charge of fixing the baby formula problem. One can already sense that the wheels are about to come off, well and truly.

And that, perhaps, is why Psaki deserves some of the praise she is winning: she kept things together as long as possible. Her briefings were must-watch events because one always had the sense that she wasn’t just explaining policy, but also running it.

Reporters like her because they agree with her. But they also probably respected the fact that she had the tough job of trying to save an ailing president whose only qualification for the position was that he was not Donald Trump.

Hard days are ahead.