Cancer initiatives, DeSantis said, are “very significant in the state of Florida,” identifying it as the second leading cause of death behind heart disease in the Sunshine State.

“And I think that’s pretty typical for what you see around the country,” he said, noting that his family knows about the hardship of dealing with cancer firsthand, as his wife is a breast cancer survivor.

“If you look within the last eight years, we’ve been able to provide in the state of Florida care and treatment to hundreds of thousands of patients [and have] educated almost 83,000 biomedical research trainees, which of course will make up the next generation of researchers,” he said, noting that, in some way or another, “pretty much everyone in Florida is touched by this disease in one way or another.” 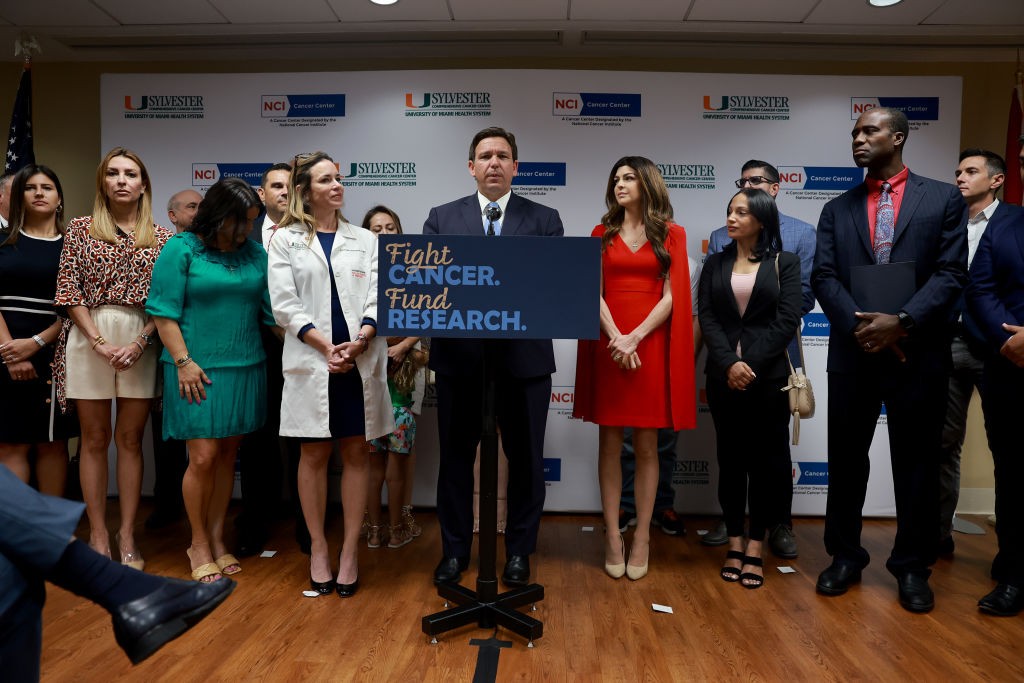 Florida Gov. Ron DeSantis (R) speaks, alongside his wife Casey (in red) during a press conference at the University of Miami Health System Don Soffer Clinical Research Center on May 17, 2022, in Miami, Florida. (Joe Raedle/Getty Images)

DeSantis explained that his mother went through breast cancer when he was a child, and his family recently dealt with it as his wife battled the disease.

“You do not want these kids to ever have to lose a mother, particularly at those young ages. And so one of the things that comforted me was, you know, all the doctors and nurses that we dealt with when she was going through it, you know, they were on a mission,” he said. “They’re like, there’s just no way we’re not going to have you around, you know, to help raise these kids and to be a mother to these kids.”

He added that his wife “provided a lot of inspiration to a lot of women throughout the state and really, even beyond that”:

And I think the one thing I’ve learned is if you’re getting this this diagnosis for breast cancer, it’s something that you can beat. It’s not easy. It’s a very difficult thing to have happened to anybody, but just have faith and really fight hard because the advances have been have been really significant. Obviously we want to do more for a whole host of other types of cancers.

In turn, Casey praised her husband for supporting her throughout her battle, telling the crowd that he picked her up “literally and figuratively” throughout the process, never even missing a chemotherapy appointment.

She also thanked the Florida legislature for making the funding for cancer research happen.

“That’s leadership that’s going to save lives,” she added.