If you’re a Democrat and you’ve lost Joe Scarborough, you’ve got a problem. Scarborough, of course, is the onetime Republican Congressman who ended up at MSNBC, where he long ago realized that his bread was being buttered by liberals. So for the most part, he now talks like a partisan Democrat. And yet sometimes, his old common sense peeps through.

That was the case on May 12, when Scarborough commented on the Senate’s vote, the previous day, on an abortion bill spearheaded by Majority Leader Chuck Schumer (D-NY).  That bill failed by a 49:51 vote.  In other words, Schumer couldn’t even get a majority in his own chamber—Sen. Joe Manchin (D-WV) was a “no,” joined by all 50 Republicans.

As Scarborough said with a sigh,“The story of the Democratic Congress, thus far, is wildly overshooting the mark, and getting nothing from it.” What did Scarborough mean? What was the problem?

The bill was dubbed the Women’s Health Protection Act of 2022, and that sounds a lot like motherhood and apple pie—except, of course, that it was about the opposite of motherhood. It was about abortion. Indeed, the bill was a radical expansion of abortion rights, superseding all state restrictions on abortion, of any kind. As such, it didn’t seek merely to codify Roe v. Wade, as Schumer claimed, but instead sought to radically expand it.

From the floor of the Senate on the 11th, Manchin said of the bill, “Make no mistake, it is not Roe v. Wade codification. It is an expansion, it wipes 500 state laws off the books, it expands abortion . . . We should not be dividing this country further than we’re already divided, and it’s really the politics of Congress that’s dividing the country.” 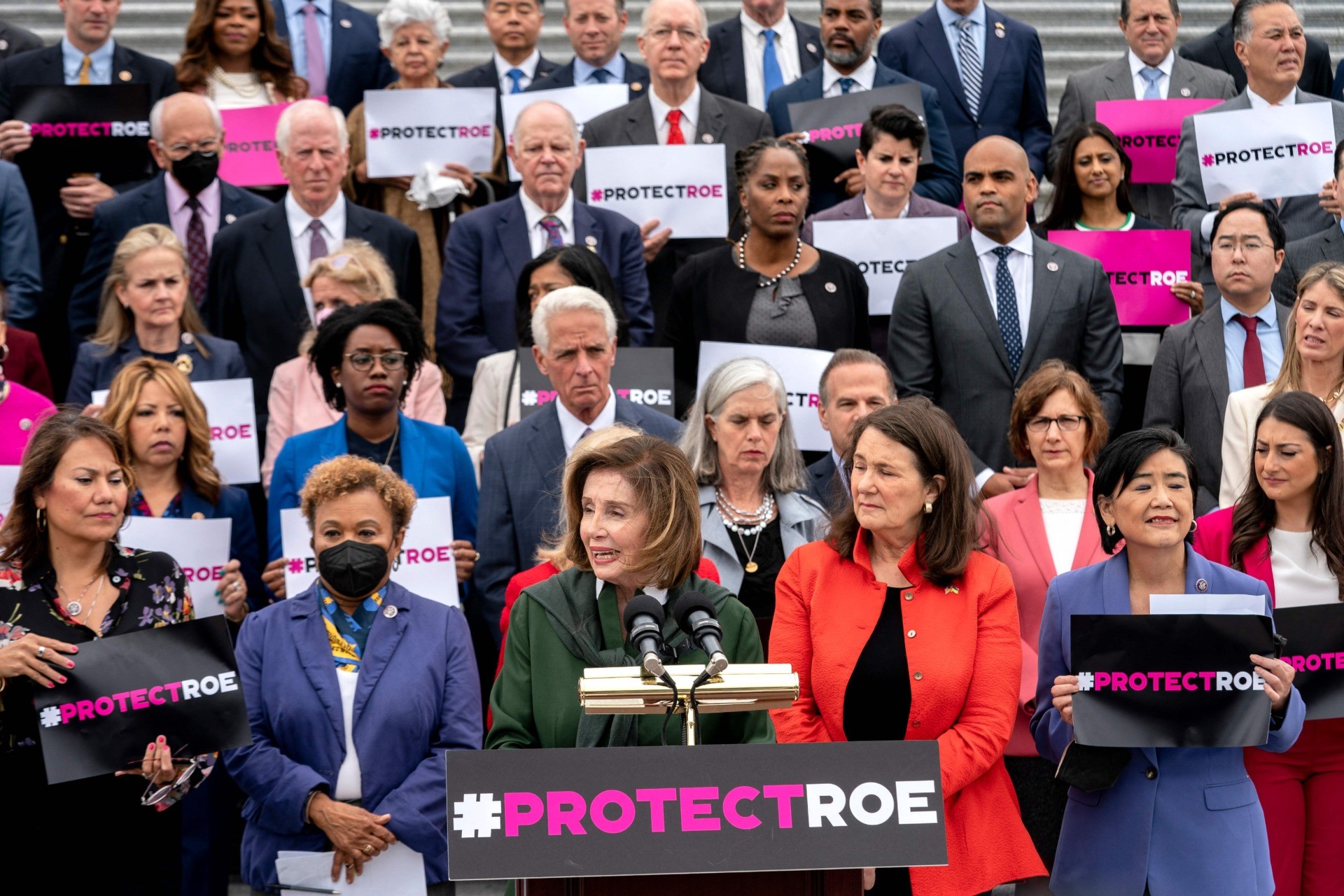 Speaking for the united Republican opponents of the bill, Sen. Lindsey Graham (R-SC), added,“Schumer … is insisting we vote to legalize abortion to the day before birth.” Graham added, “We’re one of seven nations in the world that allow abortion on-demand at 20 weeks, the fifth month in pregnancy.” And yet now, Democrats want more—they want it all.

The 1973 Roe v. Wade decision, radical as it was, nonetheless had some limits. It delineated pregnancy into three trimesters: In the first three months, governments could not prohibit abortions at all; during the second three months, governments could establish “reasonable” rules, and during the third three months, abortions could be prohibited entirely, except when the mother’s life was at risk. To be sure, Roe was an egregious instance of “legislating from the bench”; that is, un-elected judges writing new laws, to meet their fancy, as opposed to interpreting existing laws, as the Constitution prescribes.

In so legislating Roe, the high court overturned laws that had been duly enacted by elected officials; including, back in the old days, most Democrats. Indeed, up until the past two or three decades, many Democrats—including Sen. Joe Biden—expressed opposition to abortion.

Yet in the meantime, other Democrats, including President Bill Clinton, led an all-out effort to make all abortions legal, at any time. In other words, they took Roe as a baseline and then built, if that’s the right word, from there.

This determined push for abortion took the party into new territory, and it disturbed older Democrats. For instance, Sen. Daniel Patrick Moynihan (D-NY), first elected in 1976, counted himself as pro-choice, and yet in 1996, he was moved to say of late-term “partial birth” abortion, “It is as close to infanticide as anything I have come upon.”

That was then. Today, the Democrat sitting in Moynihan’s seat, Sen. Kirsten Gillibrand, is a pro-abortion totalist.

In fact, pro-abortion sentiment in the Democratic Party is so strong that more moderate rhetoric and argumentation is being pushed aside. As pro-life activist Gloria Purvis points out, Planned Parenthood now regards “pro-choice” as obsolete, and is now happy with saying, “pro-abortion…abortion isn’t a dirty word.”  Taking their cue, abortion crusaders in Congress no longer say that they are “pro-choice.”

So yes, Democrats are becoming maximalist, even extremist. And there’s more.

At the very same time that they are going all out in favor of abortion, Democrats are getting rid of another moderate word: “woman.”

You see, the Women’s Health Protection Act—the bill that lost in the Senate on May 11—mentioned “women” only in the title.  For the rest of the text, the reference is only to “persons.”  In the first line, it’s right there; the stated purpose of the bill is “To protect a person’s ability to determine whether to continue or end a pregnancy.” [emphasis added]

Yes, it seems like a joke, and yet by now we’ve all heard the joke—Democrats can’t or won’t define “woman,” because they’re afraid of offending the transgenders.  And this includes the newest Supreme Court justice, Ketanji Brown Jackson, who seemed to erase half the human race—including herself—when she said that only a biologist could correctly define “woman.”

Amusingly, the bill that just lost was less radical than earlier versions, which made references to “white supremacy” and “gender oppression,” while extending abortion protections to “transgender men, non-binary individuals, those who identify with a different gender, and others.” (If you think I’m making this up, have a look for yourself.)  It’s worth noting that this crazy bill passed in the House in 2021, with 218 Democrats voting for it. And in the Senate, 46 Democrats voted for it.

If Democrats can’t define “woman,” maybe the Republicans can feel more confident about the next election, even as the country should tremble at the thought that gender-lunatics control one of the two major parties.

In fact, it’s not just Joe Scarborough trying to warn Democrats against flying off into the twilight zone.  Just prior to the May 11 vote, NBC News added this warning in its “First Read” tipsheet:

Senate Democrats are headed for a show vote on abortion that risks dividing their party, depressing their base, and looks all but certain to be defeated.

And another Democrat, Matt Yglesias, tweeted: “Traditionally, the majority leader seeks to hold votes on message bills that unite his caucus and divide the opposition.  But Chuck Schumer doesn’t roll that way and believes in dividing his own caucus while uniting the opposition and somehow Democrats think this is good?”

Traditionally, the majority leader seeks to hold votes on message bills that unite his caucus and divide the opposition. But Chuck Schumer doesn't roll that way and believes in dividing his own caucus while uniting the opposition and somehow Democrats think this is good?

And still another Democrat, Ruy Teixeira, was moved to write:

With the likely impending demise of Roe v. Wade at the hands of the Supreme Court, the Democratic Left is on high alert.  Unfortunately, that high alert doesn’t seem to be too centered on what most American voters would actually support.  With the enthusiastic support of the Democratic Left, Chuck Schumer had the Senate vote on a bill that would effectively have legalized abortion throughout all nine months of pregnancy (perhaps a third of Americans support legal third trimester abortions). Of course, it failed.

In the meantime, across the country, Democrats seem to have the same problem: figuring out who, or what, is a woman.

Why is this happening?   What has overtaken Democrats? The answer to such questions will make for fascinating future books on mass psychosis and hysteria, and yet the short version seems to be that transgender activists and their allies have simply muscled their way into power, such that ordinary Democrats have either come to agree with them, or, more likely, are intimidated by them.

So now election-minded Democrats—including Scarborough, NBC News, Yglesias, and Teixeira—are seeing the headlights coming at their party.  And the collision could come on the apparent pending Supreme Court decision on Roe, which seems destined to ignite a disharmonic convergence of leftist passions in favor of redefining women and elevating transgenderism..

As we all know, the Biden White House has chosen not to get cross-wise with the rising lefty groundswell.  Indeed, Democrats seem to have calculated that popular outrage might be good for them, in terms of ginning up their base.

Still, political optics matter, and so now Democrats fear that pro-abortion activists will continue to threaten Supreme Court justices, and their families, in their homes.  In response, Bill Maher, normally sympathetic to Democrats, exclaimed on his HBO show, “It’s wrong! It’s intimidation! It’s against the law!” George Washington University law professor Jonathan Turley cites chapter and verse: “Under 18 U.S.C. 1507, it is a federal crime to protest near a residence occupied by a judge or jury with the intent to influence their decisions in pending cases.” 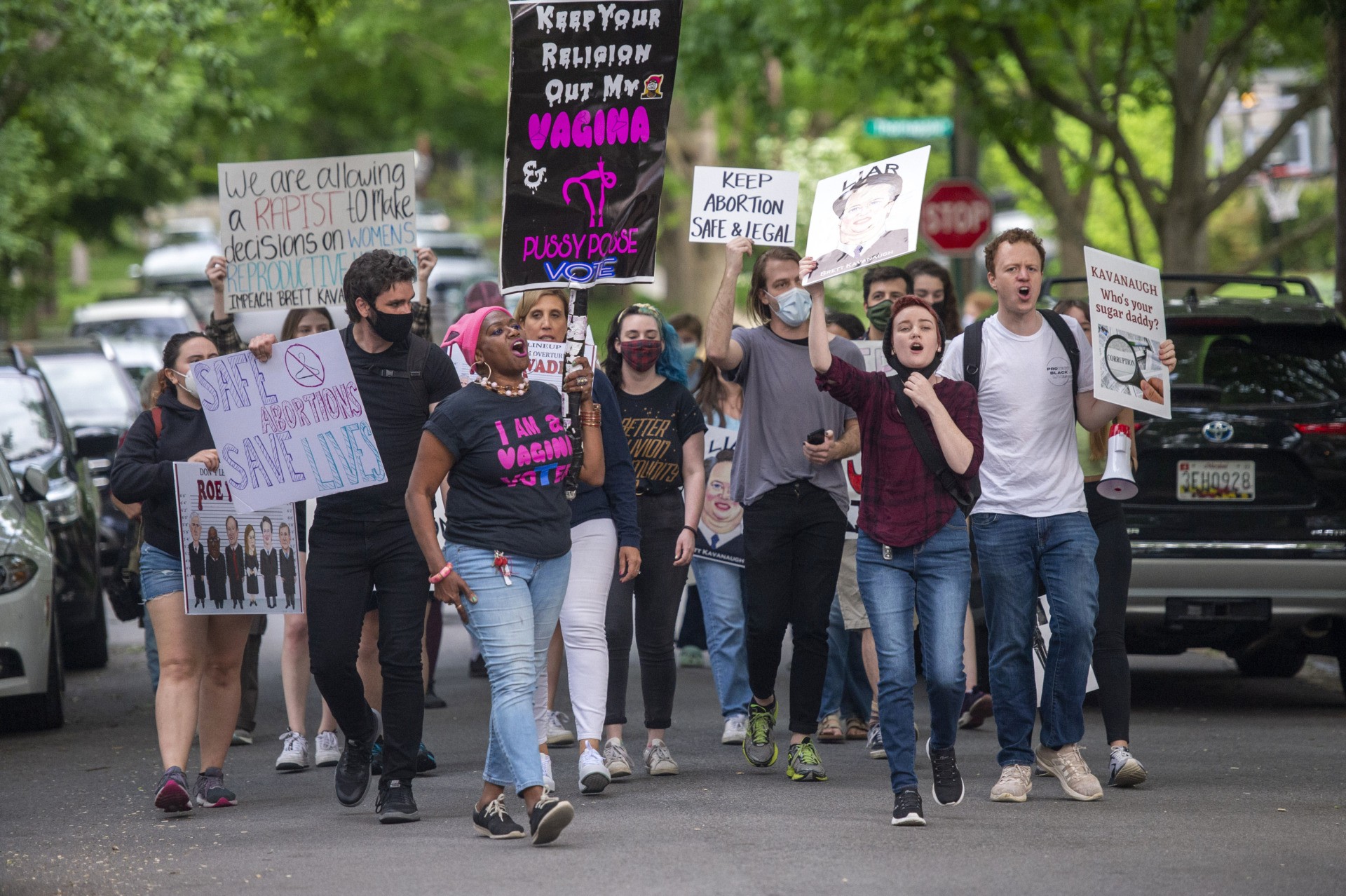 Pro-abortion activists picket outside of the home of U.S. Supreme Court Justice Brett Kavanaugh on May 18, 2022, in Chevy Chase, Maryland. (Bonnie Cash/Getty Images)

In fact, The Washington Post, always looking out for Democratic fortunes, ran this advisory headline: “Some Democrats warn abortion rights demonstrators not to go overboard.”  And finally, 16 long days after the Supreme Court leak, Attorney General Merrick Garland declared that violence was “unacceptable.”  (Still, given the Democrats’ soft stance on crime, who can say for sure how tough the Biden administration will be?–let’s pray that we don’t have to find out.)

So far at least, the left’s demonstrations seem to have been peaceful–if you don’t count the occasional acts of sacrilege and vandalism–and yet in their eccentricity, even extremism, “leftivists” hardly reassure Middle America.  In fact, even the official pronouncements of top Democrats are sort of… out there.  On May 3, Schumer and House Speaker Nancy Pelosi issued a joint statement deriding the leaked draft as an “abomination,”  If that’s the valence of the rhetoric coming from the grasstops, what will the grassroots be thinking?   So it was fitting and proper that Newsweek’s Josh Hammer quoted Abraham Lincoln, warning against the depredations of “mobocracy.”

So can Democrats keep themselves under control?  Will their outrage spill over into bad optics?  Or outright mob criminality?  We know what happened in 2020, when the left went nuts with Antifa and Black Lives Matter–while the Democratic establishment looked on quietly, sometimes admiringly–and so now we’ll have to see about 2022.

On May 15, The Woman’s March tweeted to its 620,000 followers, “Our Summer of Rage is officially beginning. We’re prepared to rage for Roe all summer.” And on May 18, Axios scooped on a Department of Homeland Security document that said that physical threats against Supreme Court justices, as well as others involved in the issue, “are likely to persist and may increase leading up to and following the issuing of the Court’s official ruling.”  Specifically, and scarily, the report added, “Law enforcement agencies are investigating social-media threats to burn down or storm the Supreme Court building and murder justices and their clerks.”  And on May 19, more protests in front of Justice Amy Coney Barrett’s house.

This is no surprise, as Democrats are being urged by their “thought leaders” to pump it up: recent headline in Politico: “Democrats Should Be Less Boring; To avoid a midterm wipeout, the party should focus less on dry policy issues and more on eliciting an emotional reaction.”  And in the meantime, lefty activists are drinking ever higher-proof rum rations.  For instance, The Nation magazine’s Elie Mystal took excess to new levels of wretchedness when he said on MSNBC:

So we can see, the “misogynist jerkfaces” who wrote the Constitution are now targets, too.

If that sort of mentality prevails, then, yes, on top of everything else, it’s possible that leftists will launch a fundamental assault on the Constitution. As this author pointed out recently, the left still wants to “pack” the Supreme Court, and since then, the pressure from the left to do something radical to the court has been getting stronger.

So buckle up: 2022 is going to be a wild ride. And Joe Scarborough could end up being very sad and angry.