There’s “nothing” about supporting abortion that conflicts with faith or would require anyone to “abandon” or “change” it, according to Vice President Kamala Harris, who warned of the impact of criminalizing the procedure, while arguing the government “should not have the ability to decide what an individual does with her own body.”

Asked about her work with activists on the issue of abortion and what Americans should expect in terms of executive action from the Biden administration if the landmark 1973 Roe v. Wade ruling is overturned, Harris called for patience in remarks on Friday.

“Well, let’s first wait and see exactly what the Court does, because that’ll give us a good idea of, frankly, what harm is going to result,” she said.

KAMALA HARRIS: “There’s nothing about [abortion] that will require anyone to abandon their faith” pic.twitter.com/6DsMBg94Ui

She then noted that she has been “convening folks around many sectors of just who we are as a society” to address “privacy issues” surrounding issues including abortion.

“Most recently, I brought together some constitutional scholars around privacy issues, because we are very concerned that the privacy right from which Roe v. Wade flows can also put at risk the right to contraception [and] the right to same-sex marriage,” she said.

“We’re very concerned about what a degradation of the right to privacy will mean, beyond the right to have access to an abortion,” she added. “So we’re going to see.”

Harris also discussed her convening of faith leaders on the issue, arguing nothing about it requires one to forsake their faith. 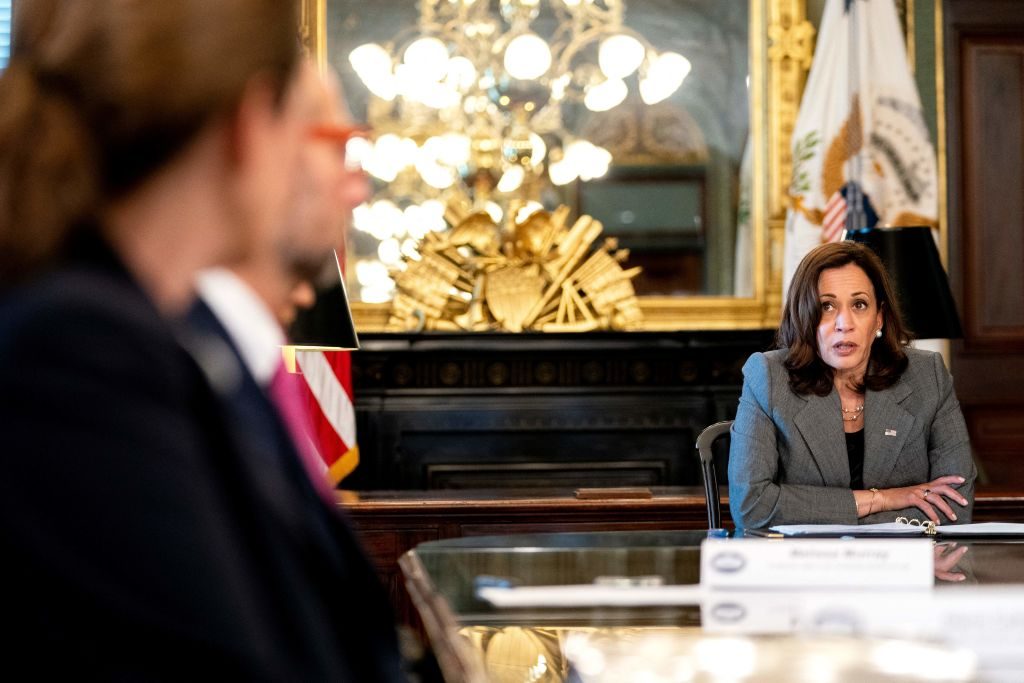 U.S. Vice President Kamala Harris delivers remarks during a meeting on Roe v Wade, in the ceremonial office of the Eisenhower Executive Office Building, next to the White House, in Washington, DC, on June 14, 2022. (STEFANI REYNOLDS/AFP via Getty Images)

“I’ve convened faith leaders,” she said. “And, for those of us of faith, I think that we agree, many of us, that there’s nothing about this issue that will require anyone to abandon their faith or change their faith.”

According to Harris, the issue is “simply saying that the government should not have the ability to decide what an individual does with her own body.”

“Let her make that decision with her pastor or her rabbi or whoever she consults,” she concluded. “But it should not be the government making that decision.”

“To Support abortion is to stand oppose[d] to Christian Faith. Just ask any Bishop or Priest,” he wrote.

Kamala Harris is wrong. To Support abortion is to stand oppose to Christian Faith. Just ask any Bishop or Priest https://t.co/hYBE1qwobO

“Lord have mercy. This woman is either ignorant or deeply deceived,” wrote popular author and speaker Stephen Mansfield.

“Goodness…,” wrote Shukri Abdirahman, who is running as a Republican to unseat Rep. Ilhan Omar (D-MN).

“The elites now want to tell you what the God they don’t believe in requires of you, just to promote their disgusting political agenda,” wrote constitutional law attorney Jenna Ellis.

Kamala: "There's Nothing About [Abortion] That Will Require Anyone To Abandon Their Faith"

The elites now want to tell you what the God they don’t believe in requires of you, just to promote their disgusting political agenda. https://t.co/zsvbNcrkV9

On Tuesday, Harris convened a panel of experts to discuss the potential consequences if the Supreme Court overturns Roe v. Wade.

“I’ve asked these experts to be here to talk with me about how we might best prepare the American people for the consequences of what this decision will be in terms of their life and the choices that they are able to make and have a right to make so that, at the very least, folks can be prepared,” she said in a statement.

“I do believe that overturning Roe could clear the way for challenges to other fundamental rights, including the right to use contraception and same-sex marriage,” she added.

Earlier this month, Harris hosted a roundtable conversation on abortion rights with faith leaders, noting the last few years had tested everyone’s faith during the coronavirus pandemic, the rise in “hate and misinformation” on the Internet, and continued gun crimes and mass shootings.

“I would like to talk with these faith leaders about the impending decision from the United States Supreme Court that we believe will undo the very principles and premise of the importance of the privacy, the right that Roe v. Wade stands for,” she said.

The right of a mother to terminate the child in her womb, Harris explained, should be “unfettered” by the government and the courts.

“So, that conversation, of course, in my mind, is a conversation that requires us to also discuss whether we value the concept of self-determination — the ability of an individual to make decisions about their own life and the future of their life and the choices that will directly impact so many other choices,” she said.

Harris has criticized the pro-life movement for pushing forward state and local laws to restrict abortions.

Last month, Harris urged people to “fight for women” after the leak of a draft opinion from the Supreme Court suggesting the court would overturn Roe v. Wade.

“This is the time to fight for women and for our country with everything we have,” she wrote in a statement released by her office.

This is the time to fight for women and our country with everything we have. My statement on the Supreme Court decision draft on Roe v. Wade. pic.twitter.com/5tvjOUTmZ2

She also rebuked the GOP, stating that the voiding of the landmark abortion ruling would be “not only an attack on women but an attack on freedom.”

“If the court overturns Roe vs. Wade, it will be a direct assault on freedom, on the fundamental right of self-determination to which all Americans are entitled,” she said.