U.S. Space Force Chief of Space Operations Gen. John “Jay” Raymond said the creation of the Space Force — which happened under the Trump administration — was the right decision.

“There’s absolutely no doubt in my mind, the quantifiable goodness we’ve had by establishing Space Force. And I’d say, in fact, on a couple fronts, I think the Air Force is a better Air Force because they [don’t] have to worry about the space mission anymore,” Raymond said recently at the 2022 Aspen Security Forum. 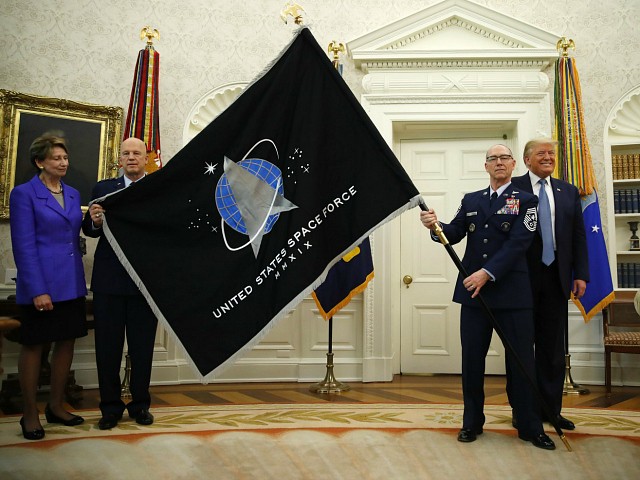 President Donald Trump stands as Chief of Space Operations at US Space Force Gen. John Raymond, second from left, and Chief Master Sgt. Roger Towberman, second from right, hold the United States Space Force flag as it is presented in the Oval Office of the White House, Friday, May 15, 2020, in Washington. (AP Photo/Alex Brandon)

“And so you now have an independent service focusing on that domain,” he added. “There’s no doubt that we are much better today than we were just doing half years ago. And back then we were still the world’s best.”

Raymond wrote an op-ed in 2018 entitled “We Need to Focus on Space; We Don’t Need a ‘Space Corps,'” though he said at the forum that he did not write the headline.

Democrats at the time also mocked Trump for wanting to stand up the Space Force.

Progressives wrote a letter to then-President-Elect Joe Biden trying to kill it, Rep. Jared Huffman (D-CA) introduced a bill to kill the Space Force, and then-White House Press Secretary Jen Psaki mocked it before having to circle back and tweet support for it.

Trump created the new service on December 20, 2019, at Andrews Air Force Base in Maryland.

“For the first time since Truman, we will create a brand new American military service,” Trump said, signing the National Defense Authorization Act that officially established the Space Force.

“You will witness the birth of the Space Force. That’s a big moment and we’re all here for it,” he said.

Trump recently touted the creation of the Space Force, on Friday at a rally in Prescott Valley, Arizona, and on Saturday at Turning Point USA’s Student Action Summit in Tampa, Florida.

“I rebuilt our military, including our nuclear capability and creation of Space Force,” Trump said in Arizona. “Space Force. Not since the Air Force 80 years ago had anything taken place like Space Force, and we’re lucky we have it.”