According to a report published at far-left NBC News, American college enrollment has plummeted over the last ten years.

“There are 4 million fewer students in college now than there were 10 years ago,” the report tells us. And this cannot be blamed on the China Flu or an overheated job market:

But while the pandemic certainly made things worse, the downturn took hold well before it started. Demographics alone cannot explain the scale of this drop. And statistics belie the argument that recent high school graduates are getting jobs instead of going to college: Workforce participation for 16- to 24-year-olds is lower than it was before Covid hit, the Bureau of Labor Statistics, or BLS, reports.

Focus groups and public opinion surveys point to other, less easily solved reasons for the sharp downward trend. These include widespread and fast-growing skepticism about the value of a degree, impatience with the time it takes to get one, and costs that have finally exceeded many people’s ability or willingness to pay.

So what is it that’s turning millions of Americans off college? Obviously, the insane cost of a degree is dissuading people from higher education. According to this report,  “Fewer than 1 in 3 adults now say a degree is worth the cost.” What’s more, more “than 4 in 10 bachelor’s degree holders under 45 don’t agree that the benefits of their educations exceeded the costs[.]” So what you have are parents and older siblings warning the younger generation off the idea of incurring the equivalent of a mortgage just to go to college. 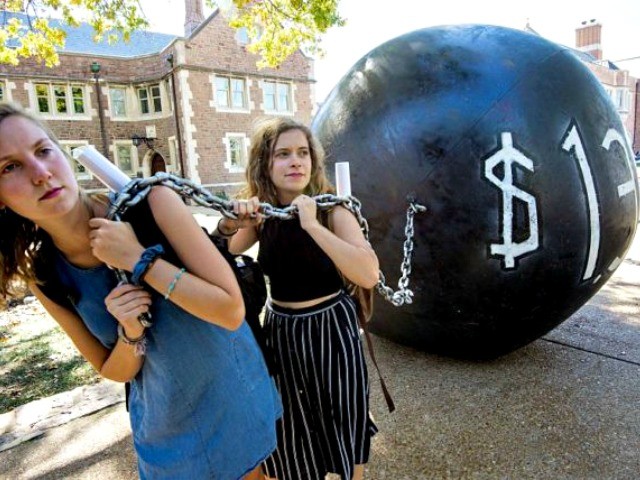 Then there’s this: “From 2015 to 2019, Americans’ faith in higher education dropped more than their confidence in any other institution measured by the Gallup polling organization.” The NBC report calls this an “extraordinary erosion of trust, considering that this list includes the presidency, Congress, big business and the criminal justice system.”

I’m not anti-college. Personally, I think it’s important for doctors, rocket scientists, and brain surgeons to attend a university. Higher education can also be a great life experience. But when you’re looking at an average of $120K for a four-year degree, you’d better be sure about what you want to do.

Universities are also gaining a reputation for being intolerant, fascist, left-wing brainwashing operations that no longer teach critical thinking. This is undoubtedly turning a lot of people off. When I was young, high school students saw college as a time to be free and experiment. If you wanted regimentation and being told what to think, you joined the military — where you at least got paid a salary. Who wants to pay $120,000 to be bossed around by woketards with no real world experience?

The federal government should never have gotten involved in the student loan business. That’s the whole problem here. That’s why costs have skyrocketed. These easy loans have allowed universities to expand and explode costs, which have come at the expense of the students.

When you’re 18 and have your whole life ahead of you, the idea of taking on that much debt hardly seems real. But once it’s real, it’s very real and beyond crippling, especially if you’re stuck with a degree in African Dance or Womyn’s Studies.