Instead of enacting policies to lower gas prices, House Democrats have held hearings that have blamed oil and natural gas prices for the soaring energy prices under President Joe Biden’s watch.

Instead, McCarthy said that the Commitment to America agenda would lower gas prices.

“We’ve watched what the Democrats and Biden have done to our gasoline costs, but here we are going into winter, home heating is up three, four, or five times. That is what’s wrong. We will bring that cost down. We’ll let you keep more of what you’ve earned,” the California conservative said.

“We want to change all that. And that’s what we’re talking about here — how the commitment to America has a plan for each challenge to make our economy stronger. That means stopping inflation, bringing the price of fuel down, making our community safe,” he added.

As part of ensuring a strong economy, Republicans remain committed to lowering gas prices, as Democrats in Congress and the Biden administration, as well as many corporations, have pushed Environment, Social, and Governance (ESG) policies that would push America away from less expensive and more reliable energy such as natural gas to unstable and more expensive energy sources such as solar and wind.

The House Republican Study Committee (RSC) has proposed other potential solutions to lower energy prices by curbing the ESG movement. Congressional Democrats, the Democrat-led Securities and Exchange Commission (SEC), and the world’s largest asset managers, BlackRock, StateStreet, and Vanguard, have pushed the ESG movement. Principally, these Wall Street firms push investors into “socially responsible funds” to invest in funds based on criteria such as greenhouse gas emissions or a CEO’s compensation.

The Biden White House has deep ties to BlackRock. 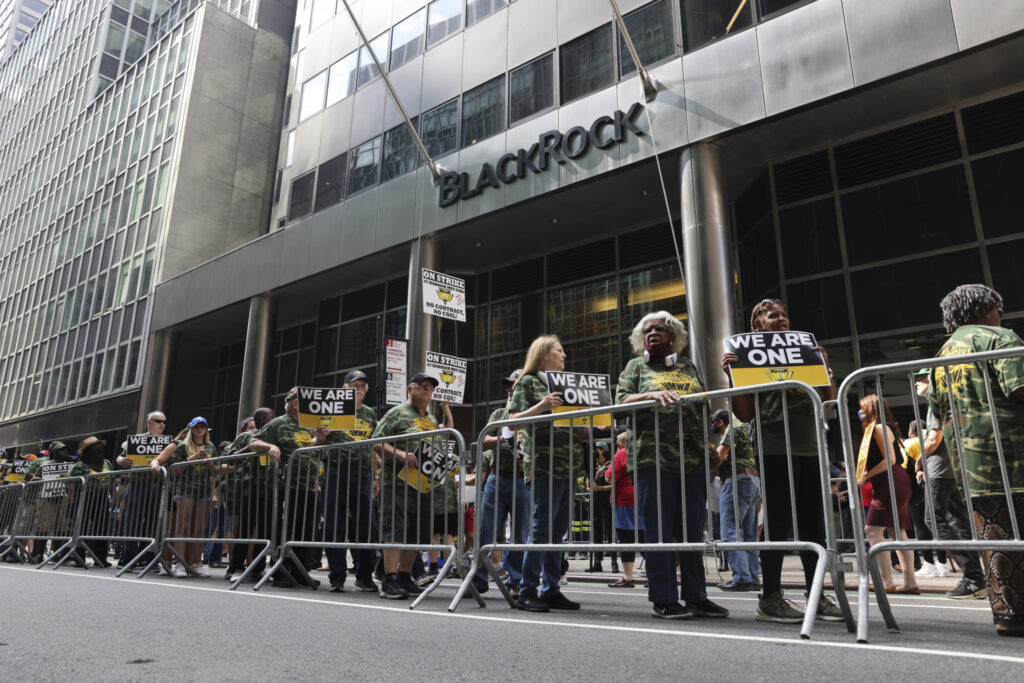 Members of the United Mine Workers of America picket during a strike against Alabama’s Warrior Met Coal at the BlackRock offices in New York on Wednesday, July 28, 2021. (Angus Mordant/Bloomberg via Getty Images)

House Republicans have proposed many solutions to curb the ESG movement:

Rep. Bryan Steil (R-WI) proposed the Corporate Governance Reform and Transparency Act, which would rein in proxy advisers such as ISS and Glass Lewis by requiring these proxy advisers to register with the SEC, disclose conflicts of interest, and make their methodologies public.

Reps. Huizenga and Rep. Blaine Luetkemeyer (R-MO) introduced the House version of the INDEX ACT, which would empower American investors by giving them a seat at the table and providing transparency in the corporate governance system.

Consumers’ Research, a nonprofit advocacy group, has worked tirelessly to raise awareness of how these large Wall Street firms have raised energy prices.

As part of its campaign to raise awareness, Consumers’ Research advocated that:

McCarthy said that the Democrat agenda, which has led to higher inflation and higher energy prices, has sapped Americans’ ability to save and make ends meet. He said the Commitment to America agenda would work to end that.

“Today, through all the voters should be asked this question, could you give up one month of your wages 90% of Americans say no, they couldn’t afford it. But you know, the sad thing about it, it’s already been taken from them. Because inflation is above 8.3 percent,” McCarthy explained. “It’s taken a full month of your wages. Now you have to live an entire year, with only 11 months of your pay. We want to change all that. And that’s what we’re talking about here how the commitment to America has a plan for each challenge to make our economy stronger. That means stop inflation, bring the price of fuel down, make our communities safe.”