Congressman and U.S. Senate candidate Ted Budd (R-NC) told Breitbart News Saturday that Republicans who are elected to the House and Senate must remember who they represent and fulfill their promises to voters after the fanfare of midterm elections fades away.

Host and Washington, DC, Bureau Chief Matthew Boyle pressed Budd about whether Republicans will deliver on their campaign promises to stymie the Biden administration’s radical agenda if the highly anticipated “red wave” comes to fruition — a concern many voters have when looking back at past GOP complacency. Boyle pointed to Rep. Kevin McCarthy’s recently unveiled “Commitment to America,” which details the GOP’s attack strategy after the midterms, and noted that while the plan has widespread support, it means nothing if Republicans lack determination.

“Step one: House and Senate, and we do that in the first two years. … And then step two is we win in 2024,” Budd replied, noting that a presidential victory is no time to “let off the gas.”

“Let’s take back our country in 2024, and then when we get there. … Step three is once we’re there, we’ve got to remember who sent us there and why we can’t ease up,” he continued.

Budd said Republicans must not fall prey to political amnesia, and must instead use the devastating fallout from Democrats’ failed agenda to fuel them past the midterms and the next presidential election.

“We’ve got to remember how bad things were under the Democrats — even if we make things better by stopping their atrocious agenda in the first two years. …We have to remember in 2024 how bad it was,” he said. “And then in 2026 and beyond, we must remember how bad the Democrats are and what their platform actually does and how destructive it is to our country. So we must win and we must win for a long time — and when we get there, we must remember why we [were] sent there…” 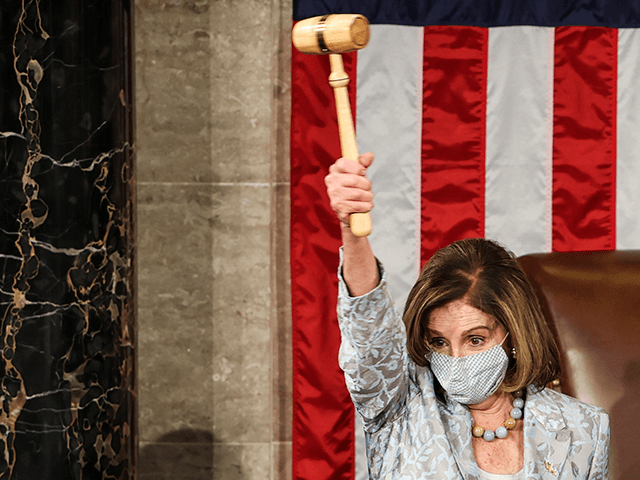 Speaker of the House Nancy Pelosi (D-CA) waves a gavel during the first session of the 117th Congress in the House Chamber at the U.S. Capitol on January 3, 2021, in Washington, DC. (TASOS KATOPODIS/POOL/AFP via Getty Images)

“When I’m on committee and I’m looking to my physical and ideological left, and I see AOC and the squad, I look behind me and I see the chairwoman Maxine Waters — that’s because Nancy Pelosi is the speaker and she gives out all these gavels to all her chairmen and chairwomen,” he said. “So we can say anything we want to in the five minutes that I get as a Republican, but I can’t control what the hearing’s about. I can’t control the narrative.”

“So we get to switch the narrative, and we get to do the investigations that we want. We get to hold the administration accountable, which the left has not done, the Democrats have not done of course,” he continued. “So that’s the first two years —  as we hold them accountable, we stop the bad.”