The Pentagon debuted the latest addition to its air force arsenal Friday, rolling out the the first new American bomber in a generation.

The B-21 Raider nuclear stealth bomber went public in California after years of secret development with the promise of being the “backbone” of a modernized bomber fleet for decades to come.

The bomber is named in honor of the Doolittle Raids of World War II when 80 men, led by Lt. Col. James “Jimmy” Doolittle, and 16 B-25 Mitchell carrier-borne medium bombers set off on a mission to bomb Tokyo.

The successful effort served as an initial retaliation for the 7 December 1941 attack on Pearl Harbor, and provided an important boost to American morale. 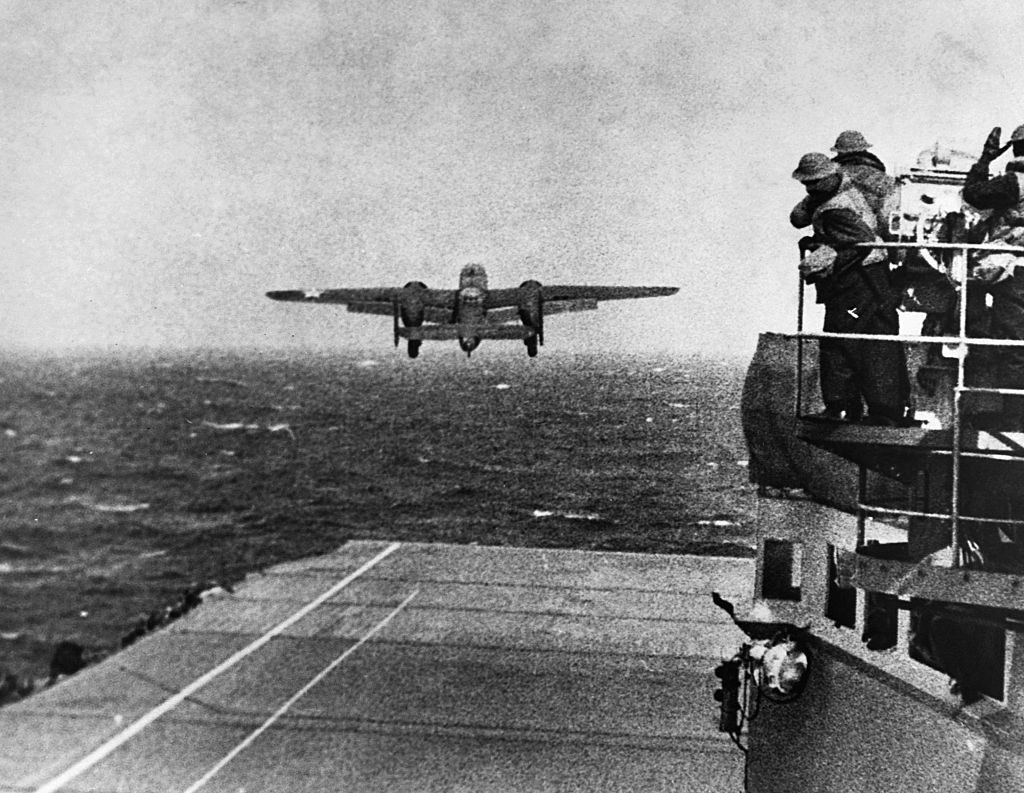 File/An Army B-25 bomber takes off from the deck of the USS Hornet on its way to take part in the first U.S. air raid on Japan in April 1942. The attack was known as the Doolittle Raid. Location: flight deck of USS Hornet, Pacific Ocean. ( © CORBIS/Corbis via Getty Images) 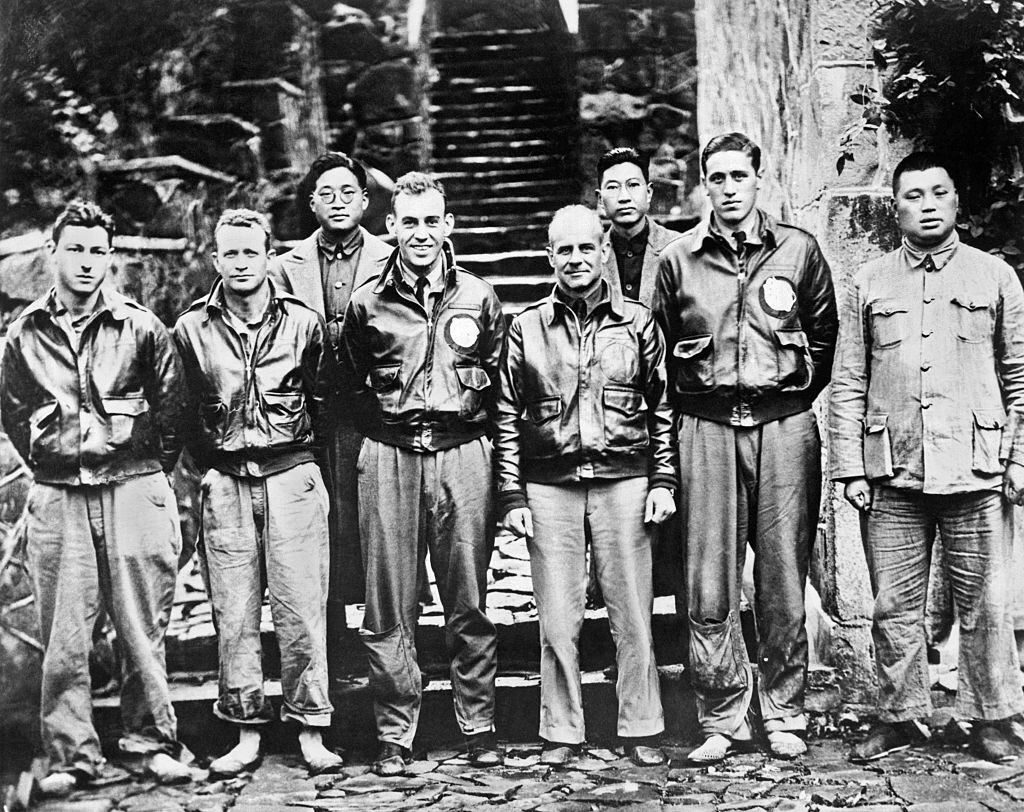 File/Major General Jimmy Doolittle and his crew pictured in China after they led the first bombing raid on Tokyo during WWII. The Raiders took off in 16 B-25s from the USS Hornet aircraft carrier and then bailed out over China after bombing Tokyo. Pictured from left are: Staff Sgt FA Braemer, Bombardier; Staff Sgt PJ Leonard, Engineer-Gunner; Kt RE Cole, Co-Pilot; General Doolittle; and Lt HA Potter, Navigator. (Underwood Archives/Getty)

The designation B-21 recognizes the Raider as the first bomber of the 21st century.

The proposed fleet of 100 aircraft is estimated to cost $203bn to develop, buy and operate over 30 years, according to Bloomberg.

“The B-21 Raider is the first strategic bomber in more than three decades,” Austin said. “It is a testament to America’s enduring advantages in ingenuity and innovation. And it’s proof of the [Defense Department’s] long-term commitment to building advanced capabilities that will fortify America’s ability to deter aggression, today and into the future.” 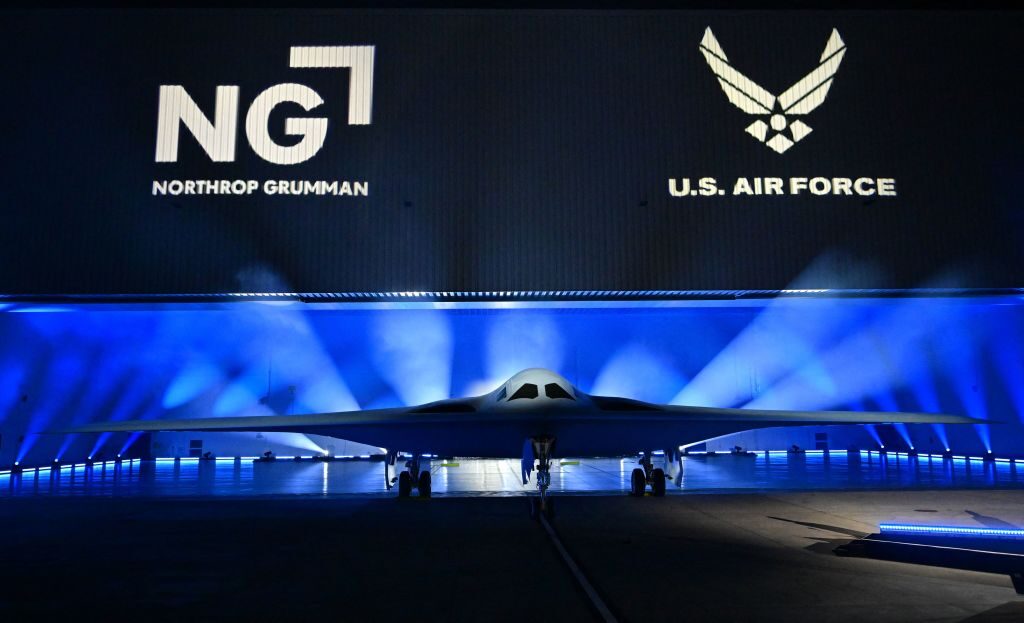 The B-21 Raider is unveiled during a ceremony at Northrop Grumman’s Air Force Plant 42 in Palmdale, California, December 2, 2022. The high-tech stealth bomber can carry nuclear and conventional weapons and is designed to be able to fly without a crew on board. (FREDERIC J. BROWN/AFP via Getty)

Air Force Chief of Staff Gen. CQ Brown Jr., predicted the B-21 will become “the backbone of our bomber fleet” thanks in part to its “updated stealth qualities and mission flexibility.”

The B-21 is part of the Pentagon’s efforts to modernize all three legs of its nuclear triad, which includes silo-launched nuclear ballistic missiles and submarine-launched warheads, as it shifts from the counterterrorism campaigns of recent decades to meet China’s rapid military modernization, AP reports.

”We needed a new bomber for the 21st Century that would allow us to take on much more complicated threats, like the threats that we fear we would one day face from China, Russia, ” said Deborah Lee James, the Air Force secretary when the Raider contract was announced in 2015.

While the Raider may resemble the B-2, once you get inside, the similarities stop, said Kathy Warden, chief executive of Northrop Grumman Corp..

“The way it operates internally is extremely advanced compared to the B-2, because the technology has evolved so much in terms of the computing capability that we can now embed in the software of the B-21,” Warden outlined.

Other changes include advanced materials used in coatings to make the bomber harder to detect, Austin said. 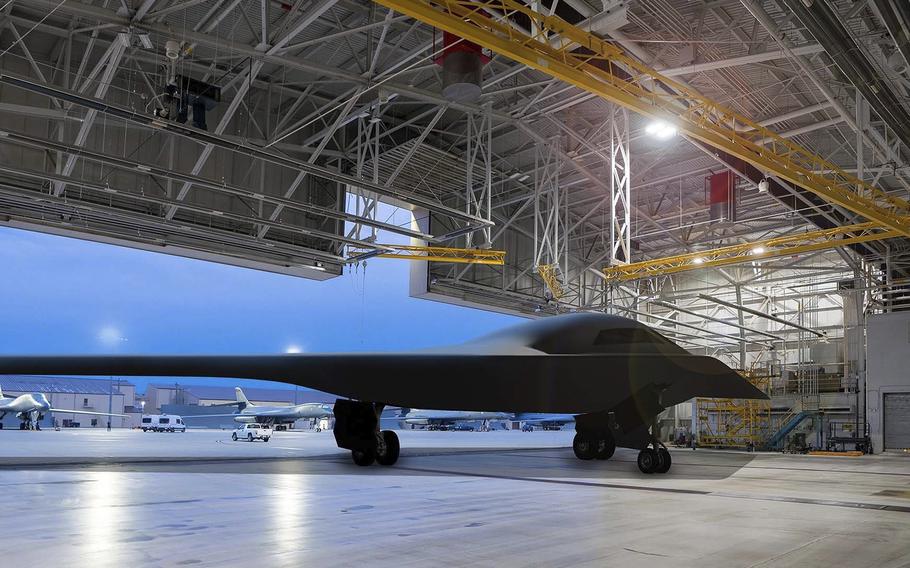 Artist rendering of a B-21 Raider in a hangar as seen with the background being Ellsworth Air Force Base, South Dakota, one of the future bases to host the new airframe. (U.S. Air Force graphic)

When it does become available, the bombers’ main base will be Ellsworth Air Force Base in South Dakota, where training will be carried out. Whiteman AFB in Missouri and Dyess AFB in Texas are also in line to host B-21s.

Six of the advanced bombers are currently under production — each are considered test aircraft.

The B-21s will eventually join a bomber fleet that is the smallest—and oldest—in U.S. Air Force history.