Perry had spent much of the holiday break negotiating with Leader McCarthy and other conservatives on a potential compromise that would lead to McCarthy to become the next leader of the House. However, Perry said in a written statement on Tuesday, hours before the speaker vote, that McCarthy has not demonstrated any “desire to meaningfully change the status quo.”

The House will convene at 12:00 P.M. ET, at which the chamber will start the roll call to elect the next speaker of the House. McCarthy would need 218 votes to become the next leader of the House. 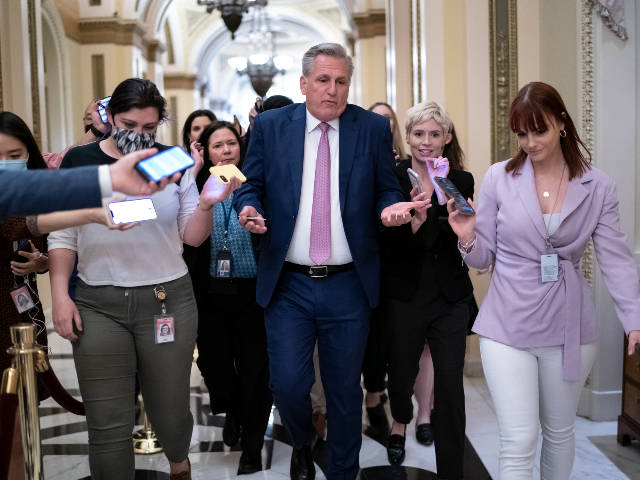 FILE – House Republican Leader Kevin McCarthy, R-Calif., rushes to his office with reporters in pursuit, at the Capitol in Washington, Thursday, May 12, 2022. The new 118th Congress, with Republicans in control of the House, begins Jan. 3, 2023, but the first task for the GOP is electing a new speaker and whether Kevin McCarthy can overcome opposition from conservative lawmakers in his own ranks to get the job. (AP Photo/J. Scott Applewhite, File)

We’ve worked in good faith for months to change the status quo. At nearly every turn, we’ve been sidelined or resisted by McCarthy, and any perceived progress has often been vague or contained loopholes that further amplified concerns as to the sincerity of the promises being made.

In his 14 years in Republican Leadership, McCarthy has repeatedly failed to demonstrate any desire to meaningfully change the status quo in Washington. Despite our deep reservations we have continued to work in earnest to find a path forward with McCarthy, knowing that this crucial moment would come.

On New Year’s Eve, at the 11th Hour, after dragging his feet for months, McCarthy presented a vague ultimatum lacking in specifics and substance.

In an attempt to flesh out and add substance to his ultimatum and our many discussions, we approached McCarthy with an offer to get him to 218 votes. He declined.

While he claimed to offer fair and equal representation for conservatives on all House committees, when we provided specific names willing to serve on each – as he requested – he balked.

We asked for firm commitments on concrete policies for the benefit of the American People. When asked to promise votes on (1) a balanced budget, (2) the Fair Tax Act, (3) the Texas Border Plan, and (4) term limits for Members of Congress, he refused.

We requested transparent, accountable votes on individual earmarks that would require two-thirds support to pass, and to ensure that all amendments to cut spending would be allowed floor consideration. He dismissed it.

We demanded that he cease his efforts to defeat competitive conservative candidates in open Republican primaries. He denied it.

Kevin McCarthy had an opportunity to be Speaker of the House. He rejected it.

Rep. Marjorie Taylor Greene (R-GA), who has supported McCarthy’s bid for speaker, said, “My friends in the freedom caucus, they need to take the win.”

In response, McCarthy asked the Freedom Caucus to present their offer to the House Republican Conference this morning ahead of the speaker vote.