Hunter Biden’s rent of $49,910 matches a rental deposit at the House of Sweden related to the Biden family business venture with the infamous CEFC China Energy Co. Hunter’s $49,910 deposit also matches the amount of money he logged on a 2018 background check document unearthed by the New York Post’s Miranda Devine.

Update: This story has been revised for accuracy regarding the frequency and target of Hunter Biden’s $49,910 rent payments.

In an email on October 13, 2017, Cecilia Browning, the general manager of House of Sweden, an office complex in Washington, DC, emailed Hunter about a lease that Hunter and his Chinese business partners were trying to terminate, according to emails unearthed from Hunter’s “Laptop from Hell.”

Browning notes the amount of the deposit was $49,910 for the office space and that it would be returned to Hunter upon signing a lease termination document.

“If you are willing to terminate the lease of #507 – the owners are willing to let you out of the lease as of December 31, 2017,” Browning emailed Hunter. “Please note that there is a security deposit paid by you of $49,910 which will be returned within 15 days after the termination of the lease (after inspection of normal wear and tear).”

Hunter had apparently requested the termination of the lease after his deal with CEFC China Energy fell apart. The Biden family had previously negotiated a deal with CEFC whereby President Joe Biden (Big Guy) would receive a ten percent equity stake in the joint venture, whistleblower Tony Bobulinski stated. 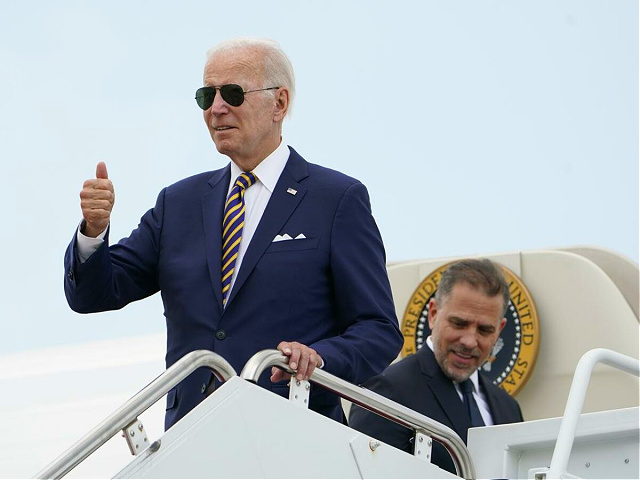 President Joe Biden gives a thumbs up as he boards Air Force One with his son Hunter Biden at Andrews Air Force Base, MD, Wednesday, Aug. 10, 2022. (AP Photo/Manuel Balce Ceneta)

“I do have good news – I spoke with the head office and they are willing to let you out of the lease as of December 31 this year,” Browning emailed Hunter a month later. “Just wanted to make sure that you received my email below, and also to ask you to confirm so that we can prepare the lease termination documents.”

Hunter appeared not to respond. Browning sent a third email to Hunter on December 14 requesting confirmation of the lease:

Hunter, we haven’t seen you for a while in the building and I wanted to make sure that you received my emails below – as you can see I now have the approval to terminate your lease as per our discussion in October (without any penalty) either December 31, 2017 or January 31, 2018 – whatever is more convenient for you. Please confirm so that we can start preparing the lease termination documents.

Yes, we are confirming that Hunter would like to terminate the lease and exit the unit at the end of February (Feb 28) and that the security deposit will cover the remaining rent less. We will pay you the few thousand more for any damage. You can let me know what that amount will be.

Hunter’s $49,910 deposit matches the amount of money he logged on a 2018 background check document unearthed by the Post’s Miranda Devine. Hunter claimed on the form he paid $49,910 in monthly rent from March 2017 to February 2018. It has since been learned that the rent was paid quarterly, not monthly. The document was signed in July 2018.

The lease dates on the email chain between Hunter and the House of Sweden have not been delineated.

The background check also noted that Hunter’s residence was Joe Biden’s home in Wilmington, Delaware, where the president kept classified documents alongside his Corvette in the garage.

The form additionally reveals Hunter checked a box showing he was an owner of the “Current Residence.” It’s not clear why Hunter noted he owned the location.

In 2018 Hunter Biden claimed he owned the house where Joe Biden kept classified documents alongside his Corvette in the garage Via @jj_talking pic.twitter.com/L7c80MRRiS