The United States is the “most permissive country” for child sex change operations and gender “transition” drug treatments compared to any European country.

According to a new study from Do No Harm, “the U.S. is quick” to pursue such irreversible procedures and treatments, only France comes close in its permissiveness, but “unlike the U.S., France’s medical authorities have recognized the uncertainties involved in transgender medical care for children and have urged ‘great caution’ in its use.”

The study compared European and American laws regarding child access to what doctors who advocate for such procedures call “gender-affirming care.” It found that children in America have much greater access to puberty blockers, hormone regiments, and sex change surgeries than European children.

Do No Harm concludes that the European approach is “grounded in medical science and common sense” while the American medical establishment continues to push its “medically harmful” care model.

“Between 2017 and 2021, the number of children known to be on puberty blockers or cross-sex hormones more than doubled,” the study shows.

Dr. William Malone, a board-certified endocrinologist, told Fox News “We are dealing with what may be the biggest medical and ethical scandal of modern times.”

“Transgender medicine is big business, and youth who are transitioning today will be medical patients for life, for the next 60-plus years,” he continued. “Mental health among youth is at an all-time low, making them particularly vulnerable to solutions that suggest an ‘easy fix.’”

The Do No Harm study explains that some of the increase in “transgender” identifying children might be explained by fad being a “social contagion.”

“According to this argument, the increase in interventions for adolescents is caused not by an authentic increase in the incidence of gender incongruence but by the spread of gender ideology across all facets of American life,” the study continues. “This concern is exacerbated by the degree to which the medical establishment allows such ideology to compete with or even usurp the scientific method as a guide to research and medical practice.”

Indeed, the American Academy of Pediatrics has advocated an “affirm-early/affirm-only” policy since 2018, which remains the American medical standard in most states.

“While the U.S. is quick to provide gender-affirming care, European countries are calling for months-long psychotherapy sessions to address co-occurring mental health problems,” the study says.

The U.K., Sweden, and Finland have “explicitly abandoned” the “affirmation” model because of over-prescription and evidence pointing to the persistence of gender dysphoria into adulthood.

The National Health Service England also warned against social transition — changing names, pronouns, and wearing clothes associated with the opposite sex — saying that such actions are not “neutral” and in fact have “significant effects” on “psychological functioning.”

Further, France’s National Academy of Medicine cautions against such medical interventions for minors and points to “epidemic-like” increases of gender dysphoria cases among children. 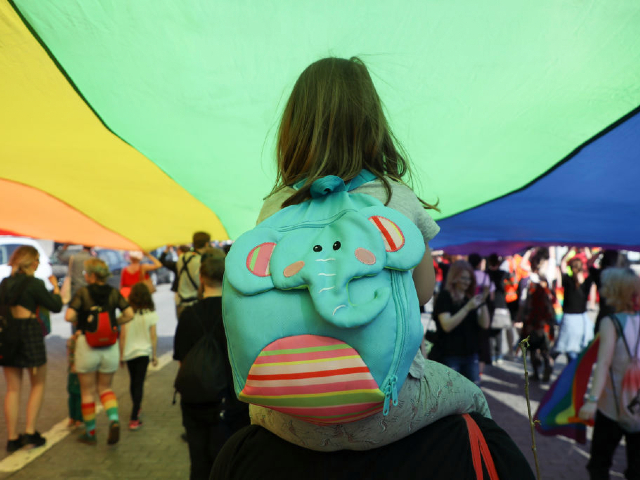 People attend the Equality March in Krakow, Poland on 18 May, 2019. (Photo by Beata Zawrzel/NurPhoto)

“Over 90 percent of children who go through gender dysphoria grow up to become comfortable with their identity as they become adults,” Do No Harm chairman Dr. Stanley Goldfarb said.

“We have jumped to hormones and surgery bypassing the most obvious alternative — therapy,” Malone continued. “We need to take a step back and study these various interventions before we can determine the best way forward. This is just what Sweden, Finland and England have done, and we hope the U.S. will follow suit.”

While most states require parental consent for child “transitions,” the ages at which doctors will permit such treatment can be as early as eight years old. In Oregon, a 15-year-old can start “transitioning” without parental consent.

Most European countries do not allow persons to start the process until the age of 18, or 16 with parental consent. Despite that, Sweden will allow treatment access to children without parental consent at the age of 12. Likewise, Finland allows at 13, while Denmark and Ireland allow access at 15.

The Biden administration has made a major push for child “transitions,” including drugs and surgeries. The Biden Department of Health and Human Serviced promoted sex-change operations for children on its “Transgender Day of Visibility” last year.