On the day that the ring buried the Greatest, the rink lost “Mr. Hockey.”

Gordie Howe died at 88 in Toledo, Ohio, on Friday at the home of his doctor-son Murray, the only male offspring of the Hall of Famer to not become a professional hockey player. The son of Saskatchewan suffered from dementia and a series of strokes in recent years.

But during his heyday, no one played better—or longer. Howe won four Stanley Cups and six Hart Trophies as the NHL’s most valuable player. He gave his name to the Gordie Howe hatrick: a goal, an assist, and a fight in the same game. Though not a great fighter, he didn’t hesitate to drop gloves. Opponents felt his toughness in his checks. Fans saw it in him grinding out a career that spanned 34 years in a game that generally grinds up players in a small fraction of that time.

Mr. Hockey competed in 1,767 games, a record in no risk of falling anytime soon. He scored 801 goals and dished 1,049 assists, which together, until Wayne Gretzky came along, stood as an NHL record. The games played record actually downplays his longevity. After playing 26 seasons for the Detroit Red Wings, Howe laced his skates up for the Houston Aeros and Hartford Whalers of the short-lived World Hockey Association for six seasons. In his last in the WHA, he passed the torch to the man who broke several of his records, Wayne Gretzky, by playing alongside him as a teammate in an all-star game. 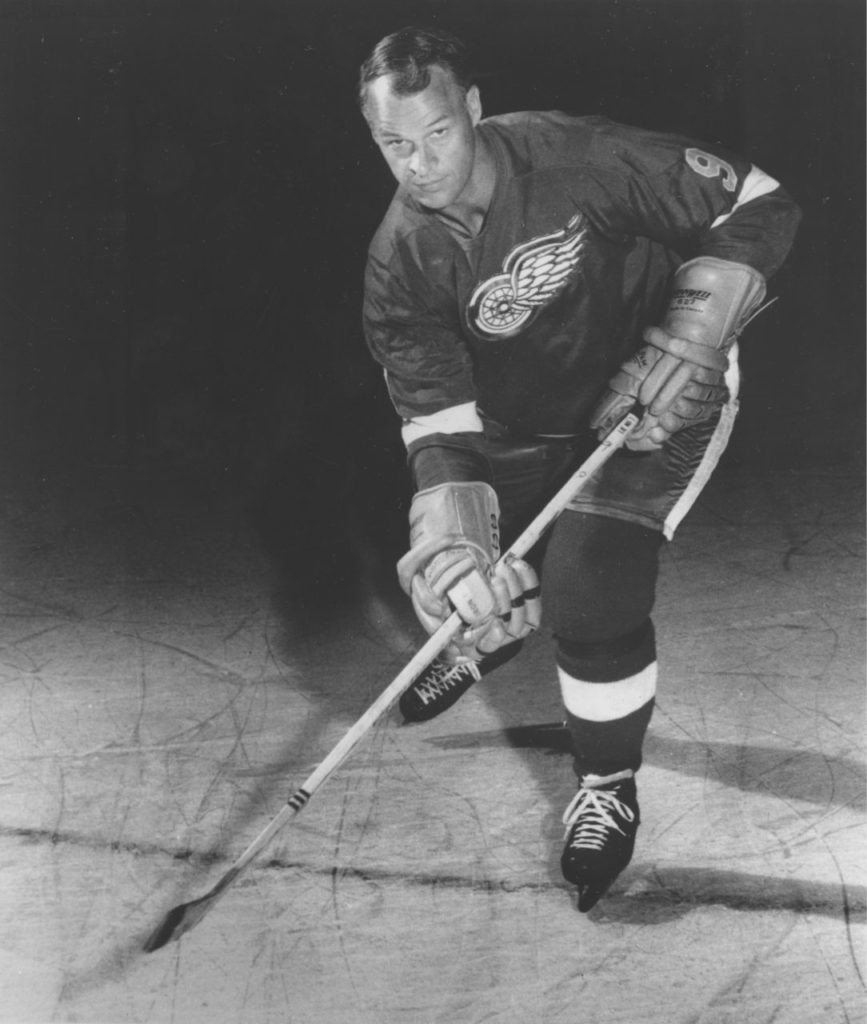 He also played alongside his sons Mark and Marty, first for the Aeros in 1973-1974 when a 46-year-old Howe led the WHA in scoring with 100 points and led the team to consecutive league championships, and finally in the NHL for Hartford, where the Howes became the first father-son-son combination in NHL history. “I always refer to that as my greatest accomplishment and excitement,” Howe said of playing professionally with his kids.

So how long did Gordie Howe play hockey?

When he made his NHL debut, a big band song, Eddy Howard’s “To Each His Own,” topped the charts.  Blondie’s “Call Me” sat atop the Billboard Hot 100 when he retired. Harry Truman sat in the Oval Office when he scored his first NHL goal. Jimmy Carter did when he netted his last. Bing Crosby meant box-office bling when Howe first laced up skates for the Red Wings. Burt Reynolds generated the most money in Hollywood when he took off a Hartford Whalers sweater for the last time at 52. When he first played for the Red Wings, next to nobody wore a helmet. Before his last season, NHL President John Ziegler mandated the headgear for new players.

When Reg Dunlop famously talked about “old-time hockey” in Slap Shot, he invoked the names Eddie Shore, Dit Clapper, and Toe Blake. But the old-timer who first stepped on NHL ice in 1946 and glided off in 1980 was old-time hockey. Gordie Howe, rest in peace.