Boston, you have a racism problem.

That boring and overplayed stereotype is, in and of itself, nothing new. However, that meme got a violent shove back into relevance this weekend when a Twitter debate erupted between ESPN’s Bomani Jones and the Monday Morning Quarterback’s Albert Breer.

Though, how this simple stereotype got play this weekend remains a bit more complex. The Big Lead explains, “Way back on the night before the Super Bowl, Saturday Night Live Weekend Update co-host Michael Che referred to the New England Patriots as being from the most racist city he’d ever been to and became the millionth person to suggest that Boston was racist.

“On Thursday Che appeared at Boston University and talked about the angry messages he received on social media because of that comment. On Saturday afternoon, WCVB picked up the AP story about Che’s comments about his comments. They tweeted the story on Saturday evening.”

Enter MMQB’s Albert Breer, who saw Che double down on his claim of Boston racism, and took to Twitter to respond:

So apparently it’s ok to just wildly label an entire city this way without much to back it up at all. https://t.co/6w6ZFkdBFq

Like a moth to flame, ESPN’s Bomani Jones, who likely still believes the Duke Lacrosse team is guilty of something, responded to Breer’s tweet: 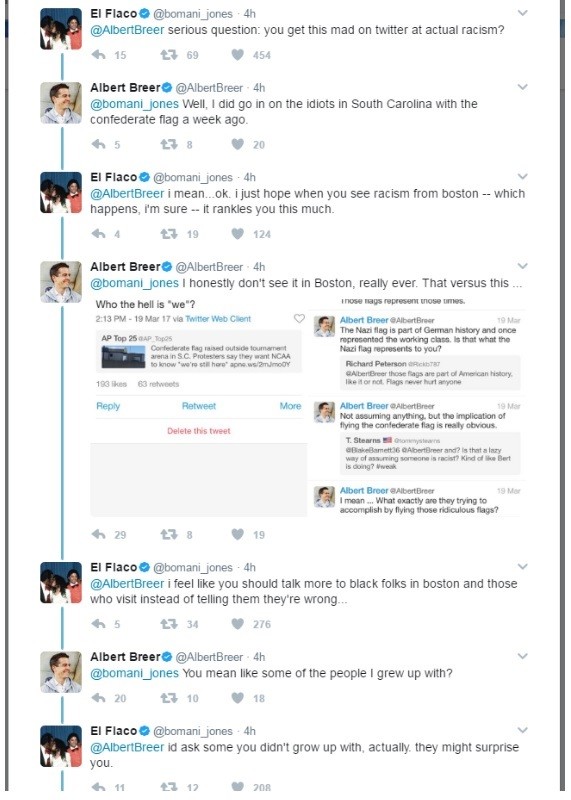 So, Bomani Jones’ advice calls for Breer to speak to black people in Boston about racism. Okay, maybe he will, maybe he won’t. But remember, Che’s claim wasn’t just that racism existed in Boston, he also claimed Boston was by far the most racist city he’s ever been to. How will Breer’s conversation with black people prove or disprove that subjective statement?

If Breer finds a black person who says that he’s suffered racism, does that one individual’s experience make Boston the reigning, undisputed racism capital of the world?

Also hard to reconcile with all this, of course, is the fact that black Massachusetts Governor Deval Patrick carried Boston handily, with seven out of ten racis…I mean Bostonians, voting for him. Kind of hard to get those numbers when everyone thinks of you as inferior and hates you.