Navratilova has been a gay rights activist for decades and is no right-winger, but it appears she is not on the liberal bandwagon for transgenderism.

In a series of tweets posted on December 18, the 1978 Wimbledon winner came out against trans women (natural-born men) competing against women. Naturally, she immediately took heat from the left and soon deleted the initial tweet.

Replying to a question on Twitter, Navratilova was sour on transgender athletes and said, “You can’t just proclaim yourself a female and be able to compete against women,” she wrote. “There must be some standards and having a penis and competing as a woman would not fit that standard.” 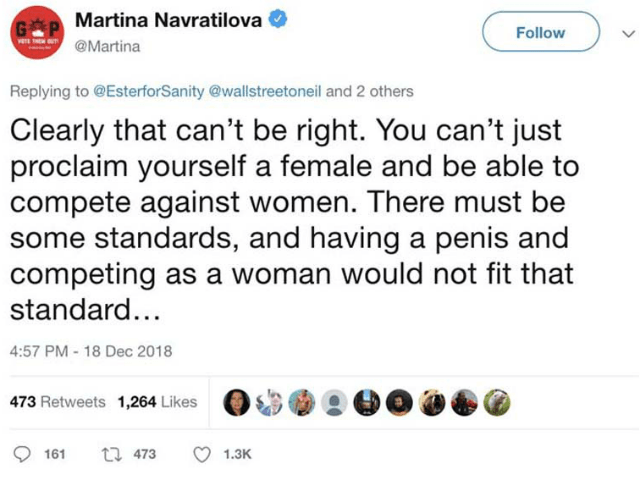 As soon as she posted the message, liberals ganged up on her and tried to shame her into changing her mind on transgender athletes.

One Twitter user warned Navratilova against allowing others to “play on her fears.”

But the Czech-American Tennis star bristled against the idea that she was afraid of anything.

Navratilova added that she was standing by her criticism of transgender athletes.

“I stand by what I said, ” the tennis star said, adding, “When it comes to sports, we need to make sure we have a level playing field. That is all in talking about fairness. The end.”

The debate over men transitioning to women and then competing against natural-born women has been raging for several years. Recently, an Australian handball player who played as a man for years before beginning the transition is now causing controversy.

Until 2016 Aussie handball player Hannah Mouncey competed on the men’s team, but now, after transitioning to a woman, Mouncey is on the women’s team, and at six-foot-two and 220-pounds, Mouncey is utterly dominating Australia’s women’s handball league.

A situation such as Mouncey’s is likely exactly the sort of situation Navratilova is concerned over.