Team U.S.A. wrestler Tamyra Mensah-Stock, who won the gold medal last week at the 2020 Tokyo Olympics, will use her Olympic winnings to make her mom’s “dream come true” by buying her a food truck.

“She’s always doing back-breaking work and … I’ve just seen her struggling ever since my dad died and I don’t like seeing it,” Mensah-Stock, 28, told People on Friday. Mensah-Stock’s father, Prince Mensah, from Ghana, died in a 2009 car accident while returning from one of her high school matches in Louisiana. After her mom remarried, she kept her dad’s last name, Mensah. “He was by far my biggest fan,” she said.

“I love representing the U.S.,” she said in a tear-filled exchange with reporters after her Olympic win Tuesday. “I love living there. I love it. And I’m so happy I get to represent USA!”

“I love representing the U.S.,” says American Olympian Tamyra Mensah-Stock, after winning gold for @USAWrestling in Tokyo. “I love living there. I love it. And I’m so happy I get to represent USA!”

Mensah-Stock also thanked God after her win. “Of course, I surprise myself,” she told reporters Tuesday. “It’s by the grace of God I’m even able to move my feet. I just leave it in His hands, and I pray that all the practice … my coaches put my through pays off and, every single time, it does.” 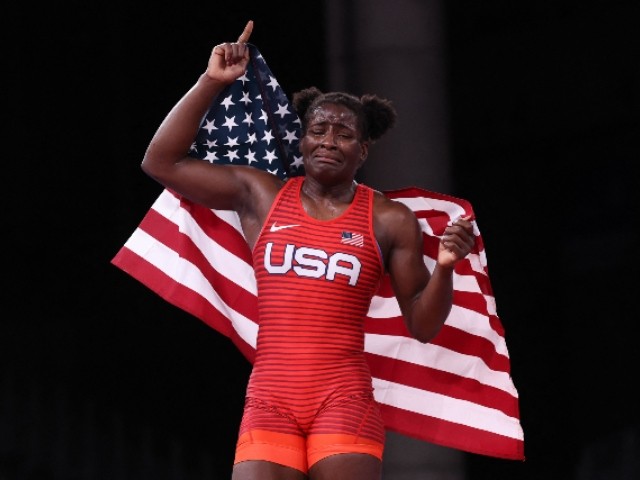 “I wanted to give my mom $30,000 so she can get a food truck, ‘cause it’s her dream,” Mensah-Stock, who lives in Katy, Texas, said. “And I told her five years ago, ‘Alright mommy, I’ll get you your food truck, but you gotta be responsible. So my mom’s gettin’ her food truck! She’s gonna have her little cooking business. She can cook really, really, really well. Barbecue!”

Before her Olympic gold win, Mensah-Stock won two state championships at Morton Ranch High School in Katy, and two college titles at Wayland Baptist in Plainview, Texas. She competed in track and field as well in high school, but took up wrestling after her twin sister Tarkiya switched sports.

She married fellow high school wrestler Jacob Stock, but told the Houston Chronicle they did not start dating until her junior year of college. “He said the reason why he didn’t want to date me (in high school) was because he thought I was too much of a good girl and he didn’t want to taint my aura with what he had to offer. And I was like, ‘Whatever,’” she said.

As for the future, Mensah-Stock said she will continue wrestling and wants to compete in the 2024 Paris Olympics. Other plans include her interest in a job with World Wrestling Entertainment, but also wants to start a family and hopes to have a future in college coaching.

“I definitely find pleasure in getting beat up and beating up people,” she said. “I’ve never wanted to be predictable or be good at one move. I want to be good at as many moves as I can so that I have an answer for whatever anybody throws at me.”