Fans at Saturday’s Evander Holyfield vs. Vítor Vieira Belfort fight made their preferences for Trump known by breaking out into chants of “We want Trump” and “F**k Joe Biden.”

Crowd is chanting “We Want Trump” and then goes into “**** Joe Biden” pic.twitter.com/aLMoxXCxuv

Trump was on hand at the Seminole Hard Rock Hotel & Casino in Hollywood, Florida, during the fight to add color commentary to the event. Trump noted that his son correctly predicted that 44-year-old Belfort was poised to win the bout with the 58-year-old Holyfield.

“You are some fighter,” Trump said. “I have to tell you, you have a couple of friends between Jorge and Junior, and my son, my ‘junior,’ they said you’re going to do fantastically well…I said, ‘Well, but boxing’s not his thing.’ Junior said, ‘Yes it is, you just watch.'” 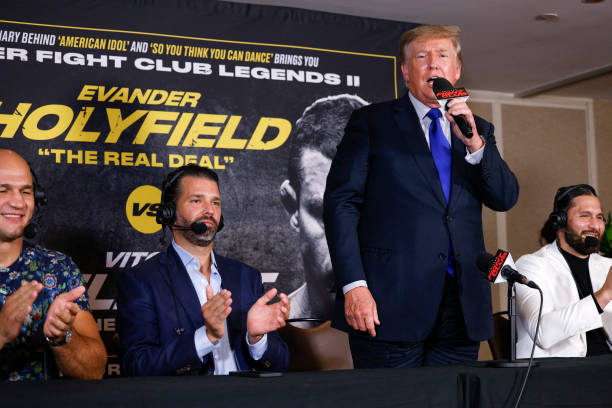 The former president spoke a bit about the 20th anniversary of the terror attacks on 9/11, but he also took a minute to blast Joe Biden for his disastrous pull out of Afghanistan, saying that Biden made “some very bad decisions.

“Well, as a country—the United States—this is certainly one of the most important days. We had a very bad week because of some very bad decisions that were made,” Trump said. “It made it even more somber than it should normally be. I will tell you, we love our country, and we’re going to do great things for our country, and our country is going to come back. We should’ve never allowed to happen what happened in Afghanistan with 13 great warriors and many people injured and many people killed in this final few days and it was just a shame. But we’re a great country and we’re going to make a comeback like nobody has ever seen before.”

Trump made similar comments in his formal address on the anniversary: