The Cincinnati Bengals survived and advanced in the NFL playoffs after their victory over the Las Vegas Raiders on Saturday.

However, the crew who officiated the game will likely not be so lucky.

The officiating crew headed by longtime NFL referee Jerome Boger found themselves at the center of controversy late in the first half when they ruled that a whistle occurred after Cincinnati’s Tyler Boyd caught a touchdown from Joe Burrow. However, the replay appeared to tell a different story.

Maybe an audio sync issue or some other glitch, but you could definitely hear a whistle mid-pass on the broadcast. pic.twitter.com/FZctJVMtLd

The whistle was blown because an official erroneously thought Bengals QB Joe Burrow had stepped out of bounds prior to throwing the ball. The whistle can clearly be heard before the ball is caught, and the Raiders clearly heard it as well since every player in the end zone wearing silver and black stopped playing and began pointing to the officials when Boyd started celebrating.

As ESPN reports, “NFL senior vice president of officiating Walt Anderson said after the game that Boger and his crew “did not feel that the whistle was blown before the receiver caught the ball.”

Anderson addressed the issue after the game.

“We confirmed with the referee and the crew that on that play — they got together and talked — they determined that they had a whistle, but that the whistle for them on the field was blown after the receiver caught the ball,” Anderson said. 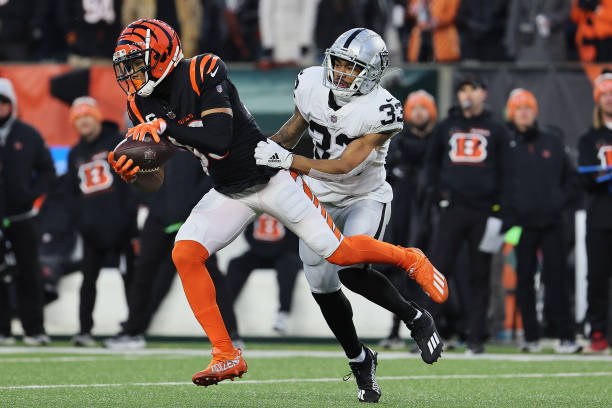 This is simply not the case, as the video demonstrates.

“Inadvertent and/or erroneous whistles are not reviewable under the NFL’s current instant replay rules,” ESPN reports.

The blown call not only cost the Raiders, but it also will likely cost Boger and his crew since the NFL grades officials based on their Wild-Card performances to determine if they should get a shot at officiating in the Divisional Round.

One would imagine that the Raiders, and probably other teams as well, would protest hotly if Boger’s crew was rewarded with another game after such a disaster.

The blown call led to a touchdown, and a touchdown ended up being the difference in the game as the Bengals won 26-19.