Basketball star Enes Kanter Freedom has been nominated for the 2022 Nobel Peace Prize after being a vocal critic of the NBA’s incestuous love affair with communist China.

“I’m honored and humbled to receive the nomination for the Nobel Peace Prize,” Freedom wrote on Twitter. “Sometimes taking a stand is more important than your next paycheck.”

Freedom shared an article from The Atlantic that profiled his humanitarian work and his criticism of China’s human rights abuses.

On October 20, just before the season opener of Kanter’s Boston Celtics against the New York Knicks at Madison Square Garden, he released a video on social media. He stood against a blank white wall wearing a black T-shirt with an image of the Dalai Lama in prayer. (He wanted to speak about Tibet before Xinjiang so that people wouldn’t think he was just supporting fellow Muslims.) ‘Brutal dictator of China, Xi Jinping, I have a message for you and your henchmen,’ he said, jabbing a finger at the camera. ‘Free Tibet. Free Tibet. Free Tibet.’

This is Kanter’s style of activism—it’s personal. He gets in a dictator’s face, nose to nose, chest to chest, as if Xi Jinping is a bully throwing cheap shots and committing flagrant fouls and everyone else is afraid to call him out. ‘Someone had to do it,’ Kanter told me.

I’m honored and humbled to received the nomination for the Nobel Peace Prize. @NobelPrize

Sometimes taking a stand is more important than your next paycheck.https://t.co/ZjAPiHUoaD

A Norwegian parliament member reportedly put Freedom up for the Nobel Prize nomination along with 30 Nobel laureates, who wrote a letter to Freedom’s former team, the Boston Celtics, to support his stance on human rights.

The Boston Celtics traded Freedom over the Houston Rockets last week on February 10 only to be waived four days later. He has since become a free agent.

During his time at the Boston Celtics, Freedom alleged that he was “begged” by the NBA to remove his “Free Tibet” sneakers from the court. 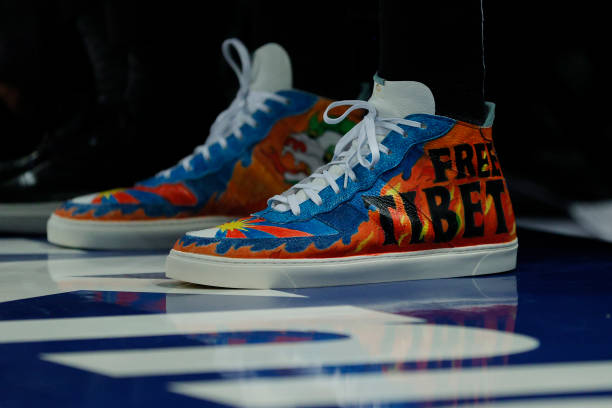 NEW YORK, NEW YORK – OCTOBER 20: Detail of the shoes worn by Enes Kanter #13 of the Boston Celtics with the wording “Free Tibet” during the first half against the New York Knicks at Madison Square Garden on October 20, 2021 in New York City. (Photo by Sarah Stier/Getty Images)

“Before the game at Madison Square Garden, two gentlemen from the NBA begged me to take the shoes off,” Freedom told the New York Post last year.

Representatives from the NBA denied to the Post that Freedom was ever censored for his sneakers.

At the time, Freedom had been gearing up for his U.S. citizenship test and cited his First Amendment rights to speak his mind.

“I was confused. I was getting ready for my citizenship test, and I knew that the First Amendment is freedom of speech. Them telling me to take my shoes off went against my First Amendment rights.”

Freedom said he refused to take the shoes off and did not care if he got banned or fined. Once halftime approached, he learned that China had banned all Celtics games from streaming in the country.