University of Pennsylvania transgender swimmer Lia Thomas destroyed the record for the women’s 500-yard freestyle at the Ivy League Championships Thursday — setting a record that may never be broken.

Thomas, who is a man and competed as a man for nearly three years on the school’s men’s swim team, won the 500-yard race against a field of women with an unheard of time of 4:37.32, the best time ever recorded at Harvard University’s Blodgett Pool, the New York Post reported.

The time was also the swimmer’s personal best and came in three seconds faster than Thomas’ previous record.

Thomas also blew away the competition on Wednesday by delivering a time of 1:44:50 in the first leg of the 800-yard relay race, beating every female contestant.

Thomas wasn’t the only trans swimmer to set a top time on Wednesday. Iszac Henig, a Yale women’s swim team member who was born female but identifies as a male even while still competing on the Yale women’s team, posted the next fastest time at 1:44:65 on Wednesday.

Even after numerous complaints from inside and outside the University of Pennsylvania, the Ivy League ignored all criticism and ruled that Thomas could compete in the championships. 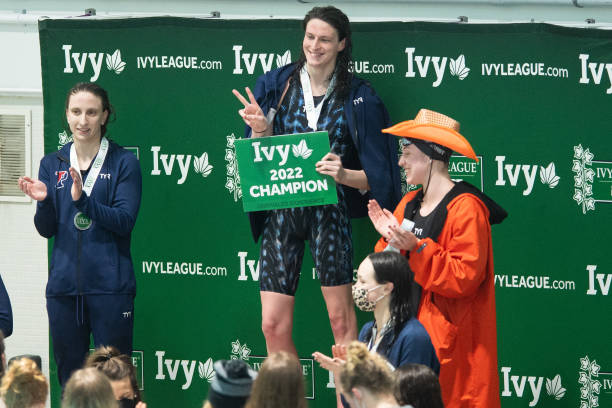 CAMBRIDGE, MA – FEBRUARY 17: University of Pennsylvania swimmer Lia Thomas smiles on the podium after winning the 500 freestyle during the 2022 Ivy League Women’s Swimming and Diving Championships at Blodgett Pool on February 17, 2022, in Cambridge, Massachusetts. (Photo by Kathryn Riley/Getty Images)

But despite the league’s decision, not everyone was in favor of allowing Thomas to compete. In February, 16 of UPenn’s female swimmers had signed a letter saying that trans swimmers like Thomas should be banned from women’s competition. Since Thomas is still a biological male, the female swimmers said they couldn’t win.

Others outside the UPenn team have also spoken out.

One prominent voice speaking out against Thomas was Rice Swimming coach Seth Huston, who has been head coach of Rich for 19 seasons, who said that it was “black and white” that transgender “women” are a threat to real women.

“The NCAA once again has proven that it is not leading. It is not really even following,” Huston said last month. “The NCAA governance has become a bystander waiting for other organizations to make tough decisions. They hoped NIL would continue to be suppressed, and now they are scrambling to make it fit their construct. Now they sit on the sidelines with Transgender issues.”