Students at a school in England are being handed material advising them to avoid GamerGate, the consumer ethics movement. The handouts compare GamerGate to ISIS and the English Defence League, calling all three “illegal” and “extremist” activity.

One student told Breitbart Tech the handouts were drafted on the basis of information originating with the Home Office, a branch of the British Government, though there is conflicting information available on this point.

Mandatory courses in “Education for Life” at the college, which Breitbart is not naming, include instructions for pupils to follow about “dangerous websites.” GamerGate is described as “an online group that harasses women – often with threats of violence or death.” 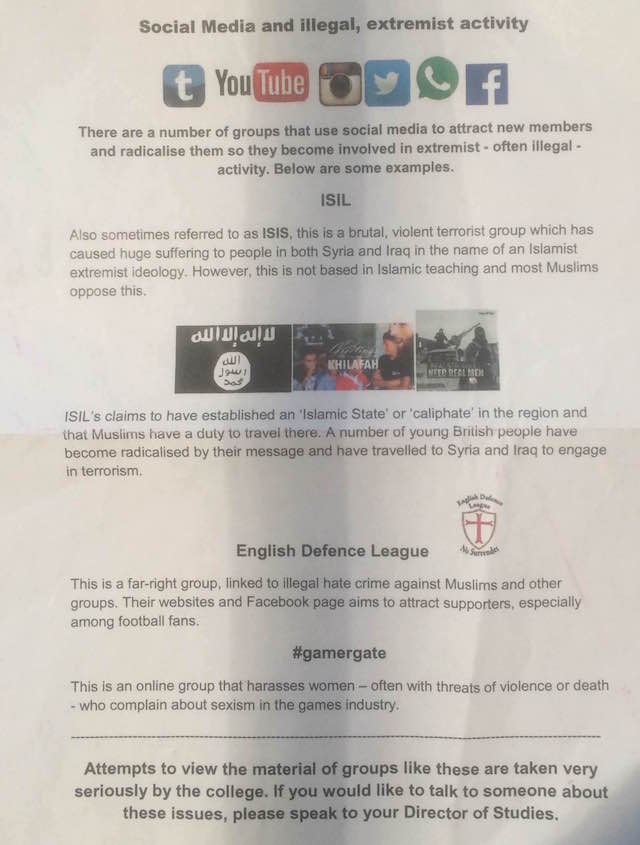 “Attempts to view the material of groups like these are taken very seriously by the college,” the handout continues.

Breitbart is not naming the college to protect the student who shared his identity with us, and because the headmaster of the school has promised to review the material. But what will concern GamerGate supporters, who advocate for better ethics in games journalism and resist some feminist critiques of mainstream games, is that the school’s handouts might have been drafted on the basis of government advice.

Even more remarkable is that GamerGate is mentioned in the same breath as the Islamic State and the EDL. The Home Office did not return a request for comment.

Editor’s Note: since the publication of this story, conflicting information has arisen about the source of advice to the school that GamerGate was a hate movement. We have once again requested comment from the headmaster.