Admins on Reddit, where posts are listed in the site rankings depending on the number of “upvotes” and “downvotes” they receive from users are facing accusations of employing vote manipulation to suppress posts that go against their political beliefs — including the recent Donald Trump AMA.

According to research done by Reddit user /u/AntonioOfVenice, over the course of approximately eight hours, the upvote numbers on Trump’s AMA fell by 10,000 votes while the “total vote number” remained constant. In the first hour the total upvotes on the AMA rose to 11,789. These votes made up 63% of the overall votes on the post, which could possibly be attributed to thread being downvoted as it gained popularity.

After midnight, the 63% of upvotes remained the same even as the net amount of upvotes rose. Within 15 minutes the post dropped from 11,789 votes to 11,020 votes. After an hour the upvotes had dropped all the way to 8,633 with the final amount of upvotes dropping to a minuscule 1,752 in the last post archive while the upvote percentage still remained at 63%. This suggests that some form of vote manipulation was in effect. Even if the post had been downvoted constantly that should not have affected the amount of upvotes. The only way upvotes could have disappeared from the post would be if someone with access to the Reddit backend had removed them.

User /u/AntonioOfVenice ran a regression analysis on the relationship between the number of upvotes and the time elapsed since upvotes began to disappear and when they stopped disappearing. 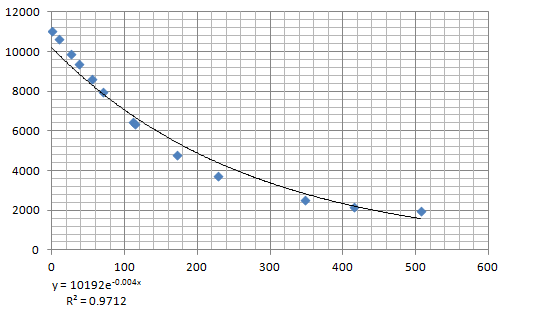 What this shows is that there is a negative correlation of -0.94 between the number of elapsed minutes and the net upvotes on the AMA. What this tells us is that even if the downvotes could be explained by a mass army of Reddit users actively downvoting the thread at the designated minute, this would have to be an organised army of thousands.

Reddit CEO Steve Huffman made a post explaining why the Trump AMA fell so quickly down the site rankings, saying, “The short for answer is because of anti-cheating techniques that we have used for many years. While a post is young, the score we display is not the same as the score we sort by. We do this so that spammers, cheaters, and brigaders don’t know if their tactics are working. A vote – valid or not – appears to count, but over time the displayed score becomes more accurate. This affects all posts the same, and has for a long time.”

But this explanation does not explain why as the Trump AMA was being pushed further and further to the bottom of /r/All. A post featuring a naked painting of Donald Trump by a user from /r/EnoughTrumpSpam was easily upvoted to one of the top posts on /r/All despite having nowhere near the same amount of upvotes as the official Trump AMA thread.

Reddit admins have in the past made their intentions to suppress pro-Trump posts clear. They recently admitted to changing their page algorithm recently to suppress posts from the Donald Trump supporting subreddit /r/The_Donald. Reddit of course is a private company that is allowed to censor what they see fit, but they cannot claim to be a platform that supports free speech while doing so.

Lucas Nolan is a conservative who regularly contributes articles on censorship and free speech to Breitbart. Follow him on Twitter @LucasNolan_ or email him at lucas@yiannopoulos.net

DISCLOSURE: Reddit user /r/AntonioOfVenice is a moderator of the subreddit /r/dickgirls, of which Breitbart Tech writer Allum Bokhari is also a moderator.