Hello Games’ No Man’s Sky is a truly disappointing excursion into a universe of wholly untapped potential.

Outside of the insurmountable hype, No Man’s Sky would have been a very intriguing tech demo or a curiously ambitious indie experiment. But in the shaking hands of Sony’s wild-eyed marketing slather, this promising title has withered beneath 18 quintillion layers of shiny paint.

That’s not to excuse Sean Murray and his team from their open embrace of the exaggerated — and quite often patently false — claims made about their virtual universe simulator. But the biggest culprit is expectation, and it was an expectation quite deliberately fueled by smoke, mirrors, and theatrics.

The thing is, No Man’s Sky just isn’t a very good game. It’s an interesting experience, couched in an almost hypnotic premise, but it’s not really any fun to play. Development seems to have centered around an attempt to take Dwarf Fortress‘s terrain and creature generators, then apply them to a 3D space, parceling the maps out into worlds of every variation that the math of a randomly generated universe can achieve.

The first problem is that such a concept misses the point. Dwarf Fortress isn’t compelling solely because of the sheer variety that one can encounter. It’s compelling because there are meaningful ways to interact with the worlds and beings it creates. It is compelling because almost every single detail matters to some degree. It is magical because when all of those intricate systems play with one another, it is virtually impossible to guess what will happen.

No Man’s Sky skips all of that entirely. Your interaction with other intelligent beings is limited to simple trade exchanges, or the agonizing drip feed of translated alien words so that you can make some sense of the one or two lines any given character has to say. When you interact with the environment, you can do one of two things. You can pick bits off of small plants, or you can blow outcroppings to bits with your mining laser. Minerals aren’t built into the environment, they’re just multicolored columns sticking out of the inert ground. One planet might be radioactive or another very cold, but the only difference is a different icon on a slowly depleting exosuit meter that you refill with materials found on every world. 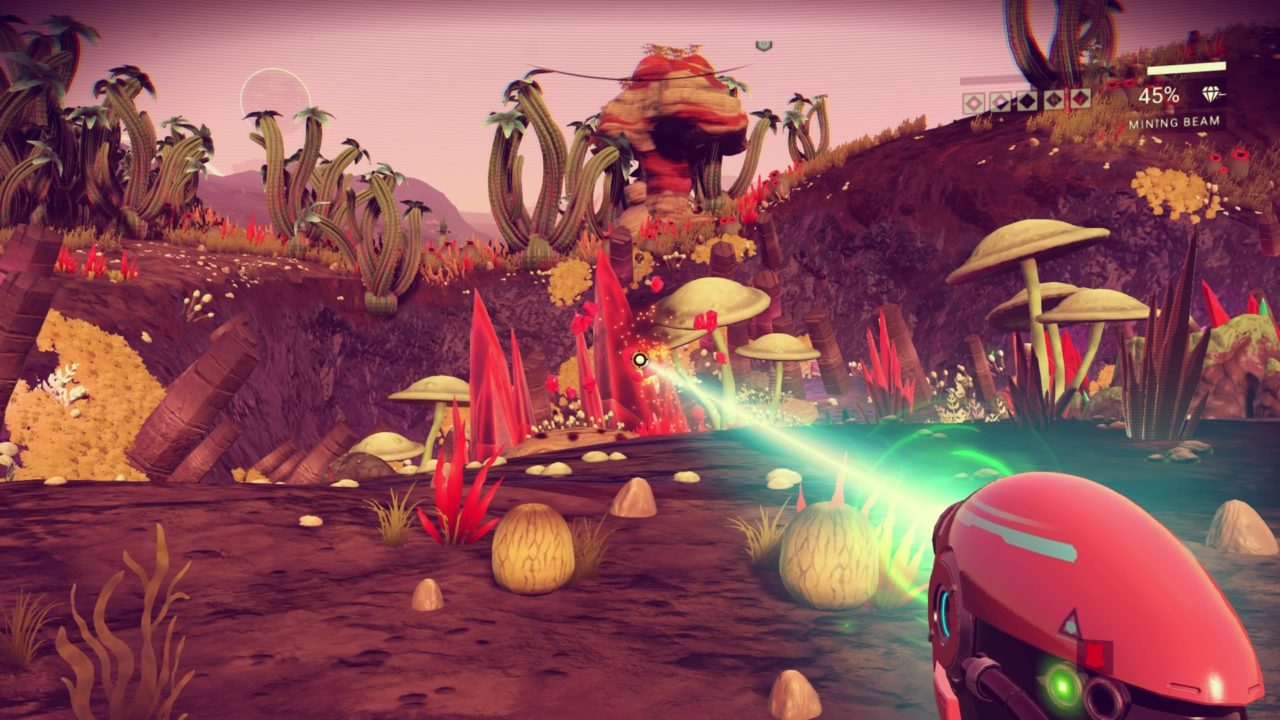 Creatures are pulled directly from another overly-ambitious simulator. Like in Will Wright’s Spore, the reality of creature creation and variety boils down to a handful of essential pieces decked out with a few aesthetic variables. The creatures are either docile set dressing or psychotic carnivores that will rush blindly in your general direction until you laser them to death. That’s when they’re not flopping wildly as the clip through geometry they cannot navigate, like coked-up fish out of water. Even in the water.

The planets themselves should be the most interesting aspect, but are little more than slight variations on what feels like the world’s most elaborately described bump map generator. The shapes are simple and rarely organic, and the scattering of flora and fauna screams “put here by algorithm, not design.” The result is an endless parade of worlds, not one of which feels at all like an actual place, inhabited by creatures that are odd without being the least bit exotic.

In the game, you are nothing. You have no form, and the only acknowledgement of your existence is the ability to upgrade the invisible exosuit in which you are encased. You can also expand the functions of your multitool — read: mining laser with simple weapon modifications — and your ship, but the effect of the upgrades is muted. Why? Because no matter what you do with anything, their utility is still restricted by the miniscule ways in which you can employ it. 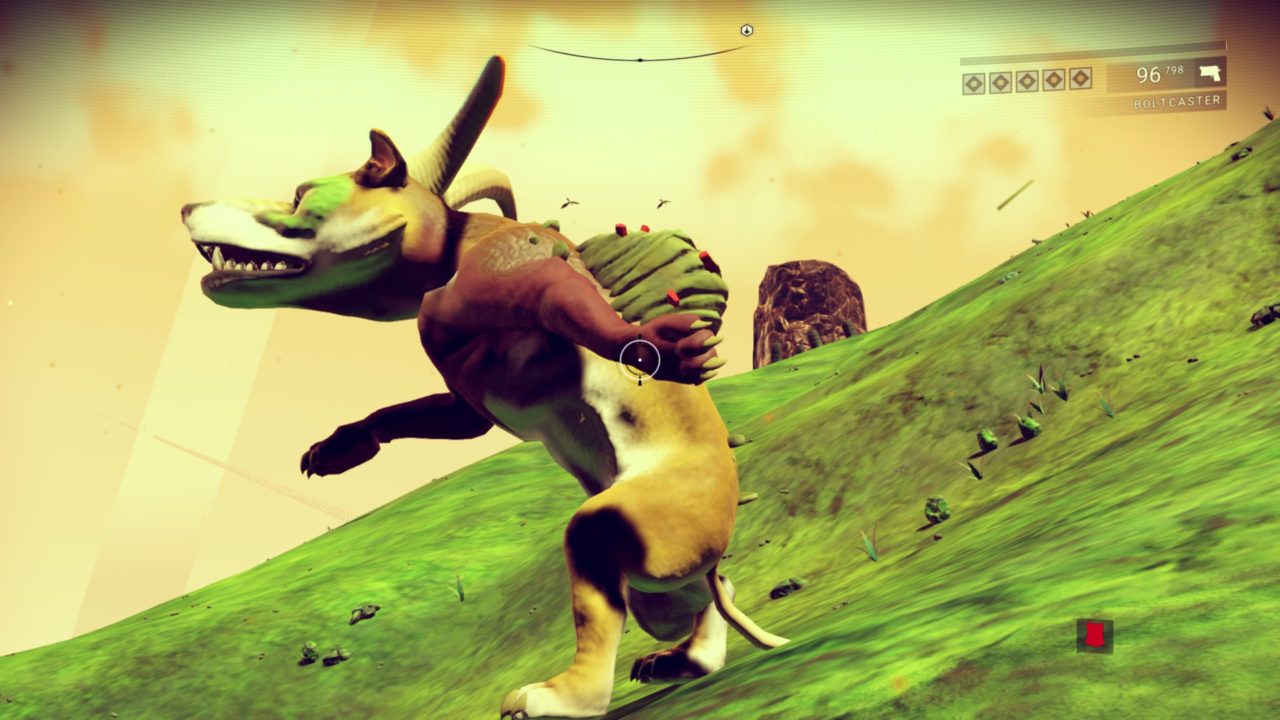 The game recalls “walking simulators” but without the curated experience or careful narrative structure of the good ones. It alludes to Minecraft’s exploratory nature, but without the potency to affect that which you discover. It makes vague suggestions about survival games, but gives you nothing worth surviving, and no outlet for the inventiveness that makes those games attractive.

All of this is packaged in a blurry, stuttering, often unplayable chaos of washed out lighting effects and synth music. The effect is intended to recreate a vision of science fiction in decades past, but wears thin because it causes so much of the game to look as monotonous as it feels to play. In a smaller experience, it would have been stylish. Spread across every undulating blob of land pockmarked with virtually identical points of interest, it is just another way that it all blends together.

Textures are messy and indistinct, a consequence of recoloring and stretching them across countless unpredictable polygons. Artificial intelligence consistently bumps and flops and strands itself, unable to cope with the randomization. Your ship controls like a paddleboat, unable to maneuver closer than about 100 meters above any terrain, making precise navigation all but impossible, and initializing the automatic landing is a matter of guesswork.

Since every takeoff not from a landing pad uses a quarter of your ship’s fuel, and your life support system drains at an alarming rate, the only break from the game’s quiet monotony is the nonstop need to gather more fuel. Imagine if Minecraft requires you to mine several blocks of dirt every couple of minutes or so to stay alive, and you’ll have a rough idea of the pacing of No Man’s Sky. 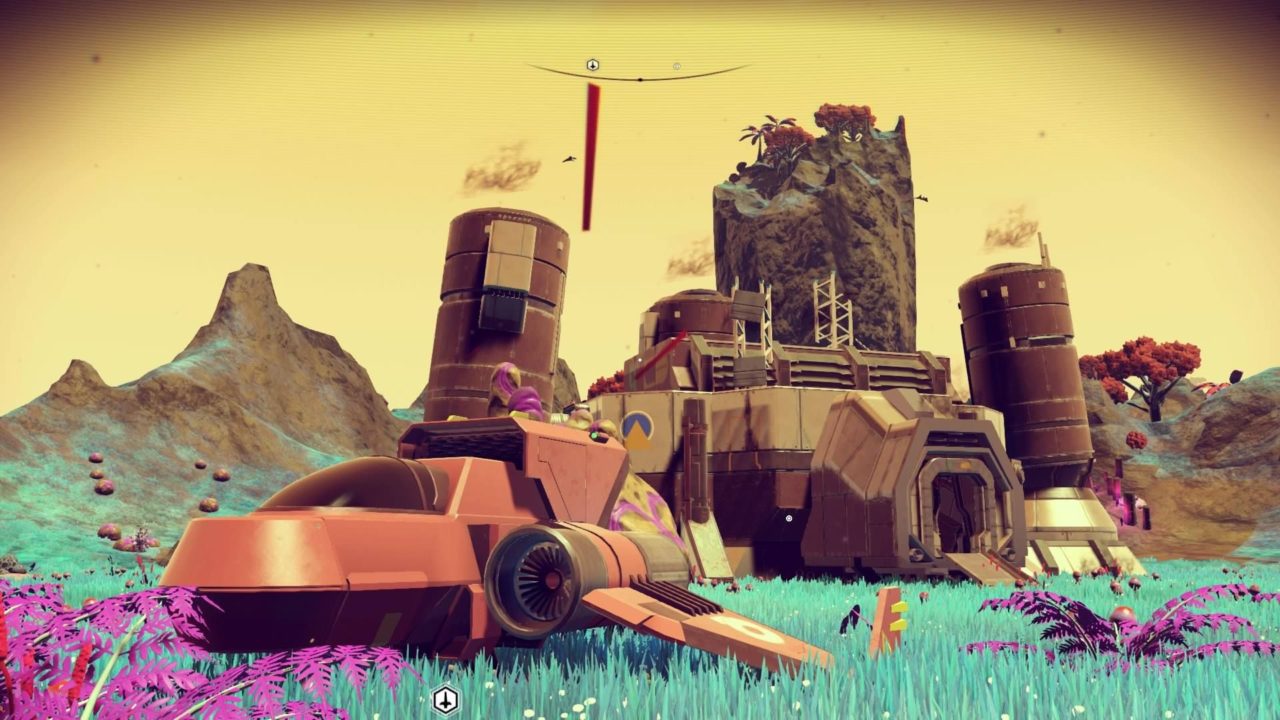 But don’t worry about forgetting to do so — a robotic voice-over harangues you every time you lose another notch. It’s the only voice you’ll hear, and you’ll hear it several times per minute. You’ll be made very aware of the state of the big bar that depletes in the corner of the screen, because you’ll be told about it constantly.

All of this can be yours on a journey to the center of the universe in order to discover the narrative secret of the game. That is almost the entirety of storytelling available, so I apologize if that’s given away too much. I won’t tell you the ending, but you can look it up and save yourself a few dozen hours with roughly the same amount of satisfaction as actually playing it.

No Man’s Sky feels like the first fetal heartbeat of a much bigger experience. It feels like a proof of concept that was sold as if it was the end product. It’s interesting and often (unintentionally) humorous, but lacking both direction and impetus. It simulates a universe that you will explore alone, upon which you can have no effect, without any compelling reason to do so. It is billions upon billions of gallons of tasteless gruel, a tiny spoon, and the promise of some meat somewhere in the middle.

It would have made a great budget-priced flight of fancy, unassuming and unique. As a humble prequel to something much more substantial, it would have been an exciting taste. The promises broken and epic exaggerations are already the stuff of Reddit legend, but even the inability to encounter any other person, or have any lasting effect on the world at all, isn’t the greatest sin of No Man’s Sky.

What saddens me — as someone who has followed and waited with anticipation on this experience for years — is that in the biggest virtual universe ever created, there is simply nothing to do. An artificial realm teeming with more species than exist on Earth is utterly lifeless. And despite literal quintillions of places to explore, there is nothing to see.