Senator Tim Scott had the perfect response to a Twitter user who called him a “house n—-a.” 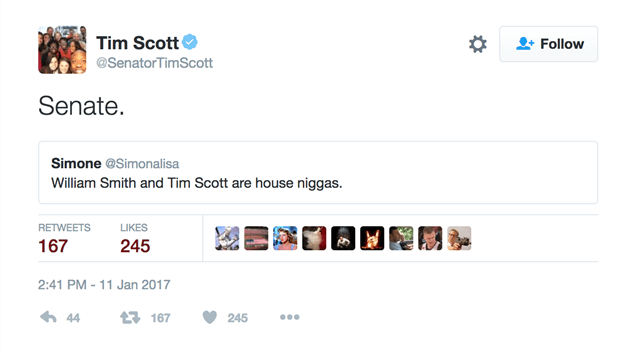 “Senate,” Scott, R-S.C., responded in a retweet, which received hundreds of likes and retweets from his followers.

The “house n—a” slur was apparently prompted by Scott’s support for Jeff Sessions as President-elect Trump’s nominee for Attorney General.

After Scott’s response, the user deleted the tweet, but screenshots of the exchange have gone viral.

Reflecting on the exchange, Scott added that he believes that people should focus on disagreeing with each other respectfully.

Disagree without being disagreeable. #motto https://t.co/xFGP3Xj1BI

Tom Ciccotta is a libertarian who writes about social justice and libertarian issues for Breitbart News. You can follow him on Twitter @tciccotta or email him at tciccotta@breitbart.com