Marvel Comics was forced to issue an apology following the discovery of alleged anti-Semitic and anti-Christian references in a recent issue of X-Men by artist Ardian Syaf.

Indonesian artist Ardian Syaf allegedly inserted political and religious references in relation to the recent Indonesian election into the first issue of the new comic series X-Men Gold. Syaf’s work on the comic reportedly featured a reference to the Koran verse Al Maidah 5:51 which urges Muslims not to take Christians and Jews as allies. The verse translates, “O you who have believed, do not take the Jews and the Christians as allies. They are, in fact, allies of one another. And whoever is an ally to them among you – then indeed, he is one of them. Indeed, Allah guides not the wrongdoing people.”

The verse can be seen on the shirt of X-Men character Colossus. 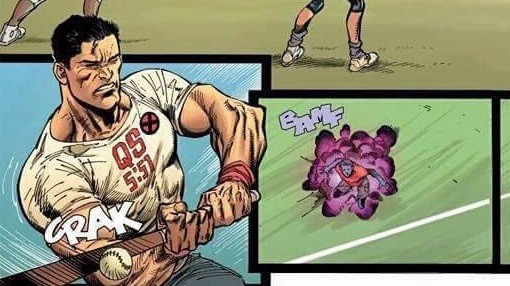 Hundreds of thousands of Muslims marched against the Christian governor of Jakarta, Basuki Tjahaja Purnama, after he criticized his political opponent’s reference to the verse. As a result, many Muslims saw this as an act of blasphemy and called for the prosecution of Purnama.

The comic also referenced the number 212 which is a direct reference to the protests held against Purnama on the December 2 last year.

The same panel that features the number 212 also features the Jewish X-Men character Kitty Pryde standing in the foreground.

Marvel Comics was quick to respond to concerns raised by those that noticed Syaf’s messages within the issue, releasing a statement on the matter to Bleeding Cool.

“The mentioned artwork in X-Men Gold #1 was inserted without knowledge behind its reported meanings,” stated Marvel Comics. “These implied references do not reflect the views of the writer, editors or anyone else at Marvel and are in direct opposition of the inclusiveness of Marvel Comics and what the X-Men have stood for since their creation. This artwork will be removed from subsequent printings, digital versions, and trade paperbacks and disciplinary action is being taken.”

Syaf declined to comment on the matter when questioned by Bleeding Cool but did reply to one fan who messaged him on Facebook. In the ensuing conversation, Syaf did confirm that the numbers included within the comic were references to the current Indonesian political situation.

Yeah pardon my French but f**k this guy. Kiss your career goodbye. https://t.co/jkLsJlCfEn

Wilson later posted a further reflection on Syaf and his work in a longer Tumblr post:

Here is What Quran 5:51 Actually Says – This has been a banner week for comics, my friends. A banner week…. https://t.co/UOFGCAEU0K