The document contains 17 pages worth of research on Larry Garfield, a leading Drupal developer who faced a sustained effort to expel him from the programming community. The document collects instances of Garfield making public comments that the document creators deem politically incorrect.

Crell by Allum on Scribd

The contributors to the dossier raised a number of “issues” with Garfield’s behaviour, including:

The document acknowledges from the start that all of Garfield’s statements (which they accuse of “trivialising gender identity, minimizing chattel slavery [and] suggesting that not drinking is the best rape prevention”) are politely worded. In other words, no-one took an issue with Garfield’s manner: it was his political opinion alone that marked him for purging. 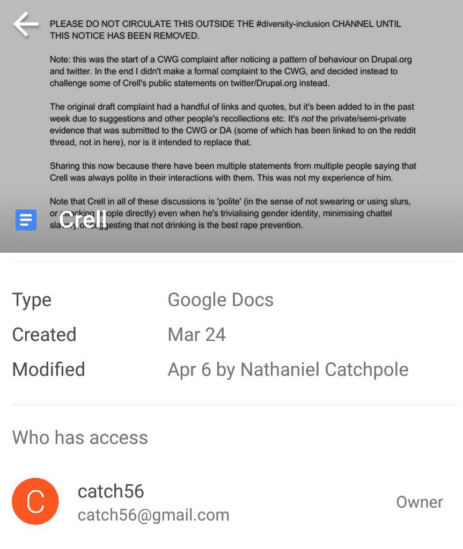 According to the document’s properties tab, it is owned by Nathaniel Catchpole, a Drupal core developer and release manager. His profile on Drupal.org lists him as a senior performance engineer, who has contributed to the Drupal project since 2006. In his Twitter bio, he identifies his interests as “improvised music, Drupal, communism.”

Josh Koenig, another Drupal core developer, also contributed comments to the document. Koening is also an owner of Pantheon, a website management service for Drupal and Wordpress that holds a number of government contracts.

The White House’s website is powered by Drupal, as is the official website of the French government and the city of London. It is also used by the BBC, NBC, MTV UK, Amnesty International, and the University of Oxford.