A new patent filed by Facebook shows that the company may use phone, tablet and laptop cameras to spy on their users.

The Daily Mail reports that social media company Facebook filed a patent called “Techniques for emotion detection and content delivery” to collect “passive imaging data” via device cameras that are not turned on, an act which experts are calling an “ethical minefield.”

The patent was discovered by CB Insights, a market intelligence firm based in New York, a CB Insights spokesperson said in a post, “On the one hand, they want to identify which content is most engaging and respond to audience’s reactions, on the other emotion-detection is technically difficult, not to mention a PR and ethical minefield.”

To explain how the software may work, Facebook created a fictional user named Desmond Jones. The patent states, ‘it appears from the profile that the user, Desmond Jones, was looking away from his device during a kitten video posted by Tim Boone. Thus, a content delivery system may determine to exclude videos of that type in the future.” The patent continues to say, “In another example, it appears that the user has watched an advertisement for scotch. Thus, in the future, more advertisements for scotch may be displayed to the user.”

A diagram from the patent describing how “passive imaging” would work can be seen below, 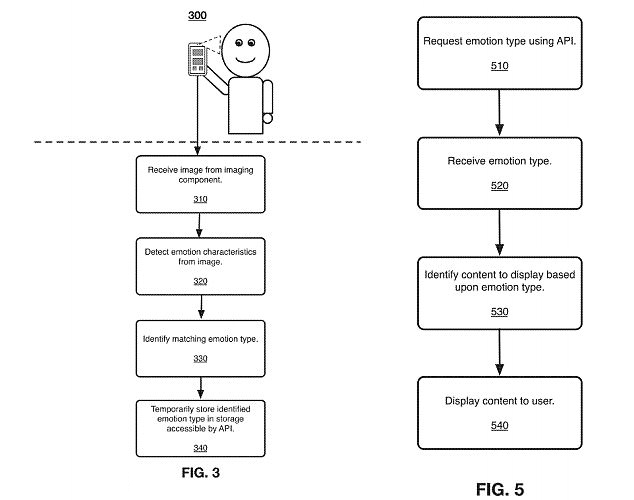 This patent was granted to Facebook in 2015, but the company applied for similar patents just last month. One of the patents is titled “Augmenting text messages with emotion information” and aims to analyze users emotions based on their text habits. If a user appeared to be happier then more emojis would be added to text and the size of the text would increase. Another patent titled “Systems and methods for dynamically generating emojis based on image analysis of facial features” would use users facial expressions to suggest appropriate emojis for the user to type.

In recent years everyone from former FBI Director James Comey to Facebook’s own CEO Mark Zuckerberg have embraced the practice of covering up device cameras when not in use.