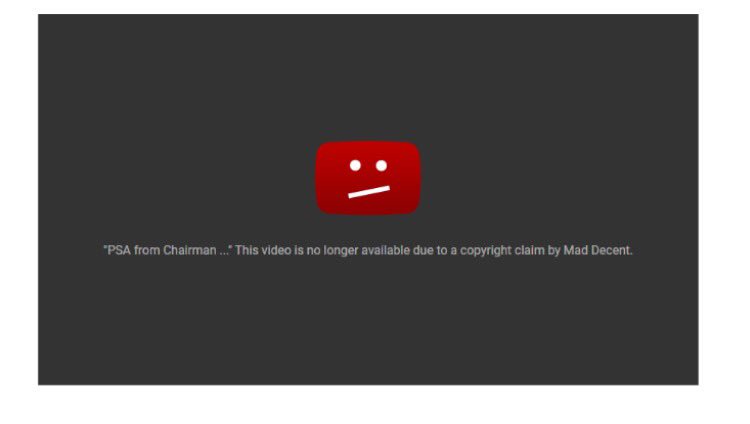 The video was taken down on the basis of a copyright claim based on an 11-second clip featuring the FCC chairman dancing to the song “Harlem Shake” along with Daily Caller staffers.

“Harlem Shake” is one of the most parodied tracks in existence. After becoming an internet meme in 2013, thousands of people have uploaded videos of themselves dancing along to short clips of the song. At one point in 2013, uploads of Harlem Shake videos on YouTube reached 4,000 per day.

The producer of the song, DJ and musician Baauer, did not make attempts to take down the flood of parody videos, instead opting to claim ad revenue on them from YouTube. Most of the parodies are still online to this day.

In a statement about Pai’s video, Baauer said “My team and I are currently exploring every single avenue available to get it taken down. I support net neutrality like the vast majority of this country and am appalled to be associated with its repeal in anyway.” “Harlem Shake” was produced using samples from other artists without permission, leading the copyright claim to be met with skepticism in some quarters.

Title II regulations on ISPs, which are portrayed by defenders as synonymous with “Net Neutrality” (the idea that all online data should be treated equally), were repealed in a 3 – 2 vote by the FCC yesterday, triggering outrage and panic from many on the left.

Much of the argument over Net Neutrality revolves around the concern that content could be blocked or removed from the internet. Perhaps ironically, Baauer has chosen to respond by trying to remove content from the internet.