The FCC has repealed Net Neutrality in a 3 – 2 vote, and the world is about to end. Or so you’d think, if you believed left-wing Twitter.

Proponents of the repeal, including FCC chairman Ajit Pai, say that Net Neutrality, which classified internet service providers as “common carriers” who must treat all content equally (even if it takes up more of their resources), was too heavy-handed a regulation and needed reform.

Pai has argued that there was no justification for the Obama administration’s 2015 introduction of Net Neutrality. “The Internet wasn’t broken in 2015” says Pai. “There was no market failure that justified the regulatory  sledgehammer of Title II.”

Opponents of the repeal say that it gives ISPs more power to favor their own content, especially streaming services. Comcast, they argue, might choose to make Netflix and YouTube load slower and their own streaming services load faster. Under new FCC rules, however, any such “throttling” of content must be publicly disclosed by ISPs. Furthermore, if ISPs promise not to throttle, as Comcast has done, and then break their promise, the FTC can impose penalties upon them.

It seems like a reasonable disagreement: two sides of a fairly technical debate exchanging legitimate concerns.

And then there are these guys.

1) The End of the Internet As We Know It! 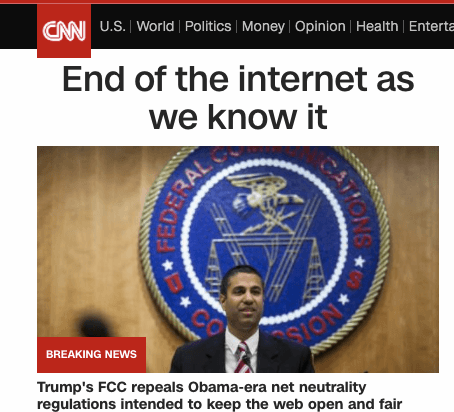 “The End of the Internet As We’ve Known It Since 2015 when Net Neutrality Was Introduced, so About 2 Years Lol” was probably too cumbersome of a headline for CNN.

Stripping away #NetNeutrality is the latest attempt by the Trump Administration to silence voices of already marginalized communities and render us invisible. https://t.co/aG8ewv90Xf

The repeal of #NetNeutrality is an attack on the LGBTQ community
https://t.co/by6r9dtIY9

ISPs, as we all know, have three major concerns: broadband infrastructure, bandwidth usage, and the type of genitals your partner has. That’s just how capitalism works.

Yes, this is the true purpose behind Comcast’s evil plan: everyone thinks they’re worried about the huge streaming services that suck up vast amounts of their bandwidth. In reality, their entire business model is dependent on paychecks from the Pro-Life Alliance. Who knew?

a list of things that'll be fucked if #NetNeutrality is denied:

resource hotlines (depression, suicide, etc.)
educational resources- ALL grade levels are in danger
online schooling
youtubers who afford to live bc of their YouTube
the US economy even

We’re going to need the fire department to deal with takes this hot.

Watch out guys, he used a 300 animation. I think he’s serious!

BREAKING: The FCC just voted to dismantle #netneutrality. This represents a radical departure that risks erosion of the biggest free speech platform the world has ever known.

There’s free speech on the internet? That’s news to us.

7) The end of Net Neutrality means the end of democracy

This is an egregious attack on our democracy. The end of #NetNeutrality protections means that the internet will be for sale to the highest bidder. When our democratic institutions are already in peril, we must do everything we can to stop this decision from taking effect. https://t.co/8GGrJFMdrU

Yeah, it sure would suck if the internet were dominated by one big corporation with documented ties to an established political dynasty and the power to swing elections with a few algorithm changes. Oh wait.

This truly is a dystopian future, isn’t it? Others were quick to expand on Banksy’s predictions:

If #NetNeutrality is repealed:
• Netflix will cost $199 per second
• $800 fine if you say MySpace
• Your iPhone will strangle you
• The entirety of Manhattan will be zombies except for one man
• Annual reaping of children will be instated
• The Lorax shows up
• Sharknado

OK, this one was true.