If Mark Zuckerberg really wants Facebook to be a “platform for all ideas,” as he repeatedly told lawmakers last week, all he needs to do is add a single, radical new feature to the social network.

Concerns over the censorship of conservatives on social media were a dominant theme at Zuckerberg’s congressional hearings last week. Commerce Committee chairman Sen. Thune (R-SD) closed the first day of proceedings by warning the Facebook CEO to “err on the side of protecting speech, especially political speech, from all different quarters.”

The Facebook CEO’s response was to assure lawmakers that inexplicable censorship of conservative accounts were “enforcement errors” and that Facebook is a “platform for all ideas” with a “responsibility is to allow the broadest spectrum of free expression as we can.”

If Zuckerberg is sincere in his words, there’s a very simple feature he could introduce for Facebook’s American users that would ensure free speech is protected on Facebook. In addition to reducing the workload on Facebook’s content moderators (and the chance for “enforcement errors”), the feature would simultaneously satisfy users who are comfortable with unrestricted freedom of expression, and those who want a “safe,” college campus-like experience on the platform. 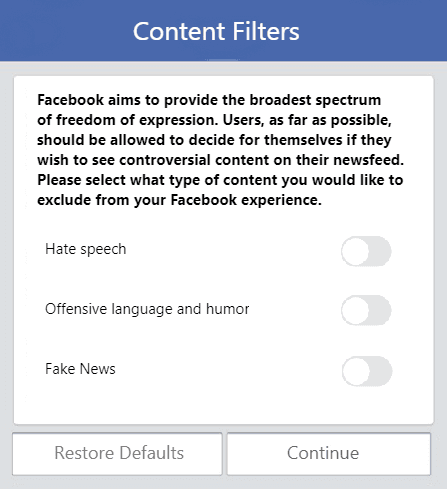 Let’s call this approach “filter-first,” and contrast it with the”ban-first” approach currently used by social media platforms. A filter-first approach recognizes that absent special circumstances like spam, phishing, or criminal activity, social media companies do not have to ban anyone when they can give users the option to filter content instead. It’s an approach that takes power away from social media executives and gives it to users – something that Zuckerberg insists he is in favor of.

Opponents will argue that it reinforces partisan filter bubbles. But so does banning! The only difference is that with a filter-first approach, users at least have the option to seek out competing views. With a ban-first approach, there’s no way out of the bubble, at least within Facebook. Therefore, If your goal is to diminish filter bubbles, filter-first is still superior to ban-first.

It’s not a perfect fix to censorship. There would be raging disputes over what kind of content gets thrown into the “hateful,” “offensive,” and “fake news” categories. There would be demands for new categories and new filters. And it would only work if Facebook also commits to transparency, informing users when their content has been categorized and why.

Filter-first would be an immense improvement over the current situation, in which social media companies, using vaguely defined community guidelines, can arbitrarily ban content across their entire platforms. Using this approach, Facebook could only limit content for the small minority of users who have opted-in to a digital safe space.

An ideal solution would be if deliberately vague, politically charged terms like “hate speech” were retired from public discourse altogether, but it will take years, possibly decades of social activism for that to be achieved. In the meantime, this approach would ensure that the snowflakes can have a safe, filtered, Disneyfied experience, while the adults of Facebook are allowed to carry on their conversations in peace.

Of course, Zuckerberg will not introduce such a feature voluntarily, even if he wanted to. Corporations, as Sen. Tim Scott pointed out last week, have turned against the constitution, including the first amendment. If Facebook reduces restrictions on hate speech or offensive material, they would immediately be hit with an advertiser boycott along the lines of the YouTube “adpocalypse.”

Lawmakers won’t act without pressure from the grassroots, of course. Republicans are instinctively reluctant to regulate private companies, while Democrats want more censorship on social media, not less. But Congress still responds to voters: many of the Republicans who questioned Zuckerberg about censorship last week said that it was their constituents who had first raised the issue with them.

As with most good things in politics, the restoration of free speech on social media will only come about when voters demand it – loudly.