Google will host a talk next month on the topic of “white fragility,” delivered by a far-left academic who routinely makes racist, blanket statements about white people, even though it prevents the invitation of moderate anti-leftist speakers like Jordan Peterson, sources within the company tell Breitbart News.

Google’s Area 120, an internal startup incubator, is collaborating with Google’s Center for Racial Equality and Systemic Transformation (CREST) to bring Dr. Robin DiAngelo, a far-left academic who coined the racist concept “white fragility” in 2011, and recently published a book on the subject. The concept of “white fragility” attacks white people as “fragile” for their response to “racial stress.”

DiAngelo’s ideas are also taught in “Sojourn,” a regular workshop for Google employees. Run by CREST, the workship has the stated goal of “identify[ing] common white racial patterns that prevent us from moving towards greater racial equity.”

This is a direct violation of Google’s own community guidelines, which calls on employees to “avoid blanket statements about groups or categories of people” and prohibits “pigeonhol[ing] people into categorical boxes based on their belonging to a certain group — whether that’s a legally protected class such as race, gender, sexuality or veteran status — or simply a stereotype about any group of people.” 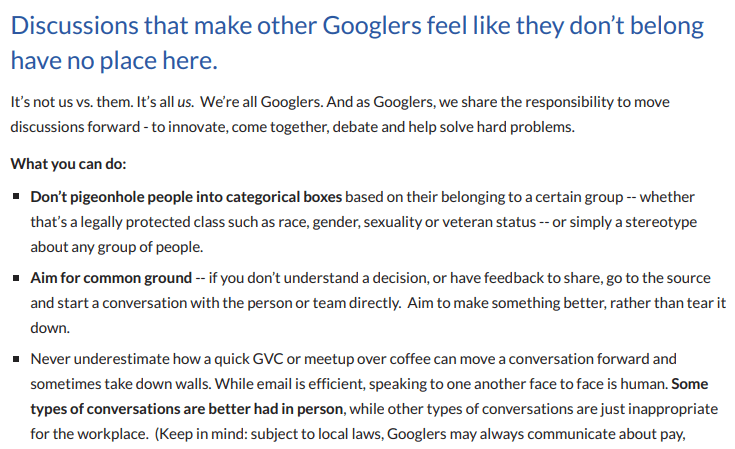 Dr. DiAngelo is also a proponent of “critical pedagogy”, an educational movement advocated by far-left terrorist Bill Ayers that calls for children to be politically indoctrinated at a young age. DiAngelo’s initial article on “white fragility” was published in the International Journal of Critical Pedagogy. This article – and the journal – are promoted as part of CREST’s workshop on “identify[ing] white racial patterns.”

The talk by Dr. DiAngelo, scheduled for 3pm on August 15 at Google’s Mountain View Campus, has been approved by the tech giant. But while Google is happy to host an academic who believes white people are “fragile” and that subjecting them to “racial stress” is good, they have previously rejected an employee’s attempt to host Canadian psychoanalyst Dr. Jordan Peterson to Google’s campus. An employee told Breitbart News that the proposal had been rejected because Dr. Peterson is involved in “potentially controversial subject matter.”

Google’s hair-trigger response to complaints by left-wing employees has also been demonstrated in their firing of James Damore, a former employee who argued that the company created a hostile environment for employees who critiqued progressive narratives. Former employees Manuel Amador, David Gudeman, Stephen McPherson, and Michael Burns have since joined Damore in a class-action lawsuit against Google, alleging that it discriminates against whites, males, and on the basis of political viewpoint.

Google’s bias was again demonstrated in their cancellation of a talk by the president and co-founder of PETA. Despite the fact that PETA is a left-wing activist organization itself, left-wing race-baiters at Google were offended that the PETA president drew a parallel between the unethical treatment of animals and racism.

The invitation of Dr. DiAngelo, a racist who also believes in “critical pedagogy”, a far-left ideology which calls for young children to be indoctrinated in left-wing political narratives, shows that Google’s bias is double-sided: on the one hand, they will reject even left-wing and moderate speakers if their far-left employees complain. On the other, they are happy to let those same far-left employees invite whoever they want to campus, no matter how radical and bigoted.

"I can describe our culture as white supremacist and say things like, “All white people are invested in and collude with the system of racism,” without my fellow white people running from the room." –Robin DiAngelo

I'm not allowed to make "blanket statements about groups or categories of people." Neutrality winds up preserving the status quo :/

Fong-Jones previously told employees that she could “care less” about unfairness towards “cisgendered, straight, able-bodied white men.” Yet Google, to Breitbart’s knowledge, has taken no disciplinary action against her, despite reprimanding conservatives for simply stating their beliefs.

Fong-Jones, who holds a managerial position at Google, is accused in a class-action lawsuit against Google of being responsible for “repeatedly” discriminating against white males. As her public comments show, she is happy to admit her bias against white males openly, and complain that she isn’t allowed to make “blanket statements” about “categories of people.” Yet Google apparently does nothing.