A recent survey from big tech workplace discussion app Blind shows that 61 percent of employees at major tech firms agree that Twitter should join the rest of Silicon Valley in blacklisting Infowars host Alex Jones. The notable exception is Twitter employees themselves.

The workplace discussion app Blind allows employees of major tech firms to sign up to anonymously discuss issues at their workplace, provided they sign up with an email address at the company they claim to work for. According to the app’s page in the iOS app store, it has registered thousands of employees from multiple tech firms: “37,000 Microsoft, 6,500 Uber, 21,000 Amazon employees and more from Google, Facebook, Airbnb, and others”

Blind regularly polls its users on a variety of topics, some as mundane as salary and benefits, others include the James Damore Google memo case and allegations of sexual harassment at Uber. Now the app has polled tech workers on their opinion of the banning of Infowars host Alex Jones with a poll titled ” Should Twitter ban Alex Jones from its platform?” 5,137 Blind users took part in the survey in late August.

Of those 5,137 users, 61.18 percent stated that they believed the InfoWars host should be blacklisted from Twitter’s online platform. Apple had the highest percentage of employees calling for the censoring of Jones at almost 72 percent. All of the tech firms represented had more than 50 percent of employees agreeing that Jones should be blacklisted, with the notable exception of Twitter itself, with just 21 percent of its employees agreeing with Jones being kicked off their employer’s platform. A breakdown of which company’s employees voted for and against the banning of Jones can be seen below: 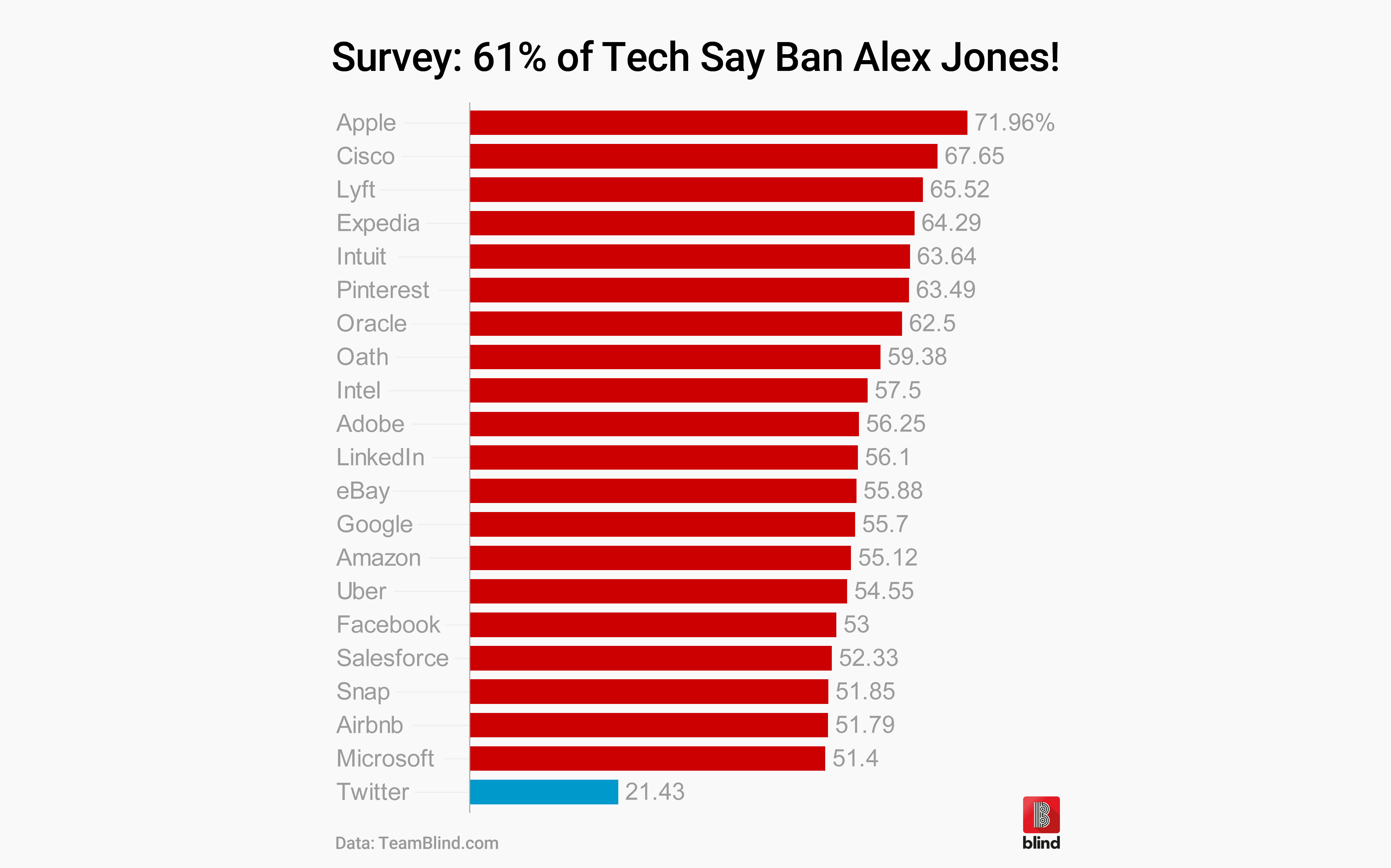 The data from the chart interestingly reflects how different platforms reacted to Jones. Apple was one of the first companies to remove Infowars and Alex Jones related podcasts from its directory while Twitter allowed Jones to remain on their platform after Facebook, YouTube, Microsoft’s LinkedIn, Spotify, Vimeo, and other platforms removed him.

For now, Jones remains active on Twitter, but did receive a week-long suspension from the platform for allegedly breaking one of the site’s rules. Twitter CEO Jack Dorsey will testify in front of Congress in September about his company’s censorship practices.