The New York City Fire Department has said it investigated if first responders or other medical personnel leaked the death of convicted pedophile Jeffrey Epstein to anonymous message board 4chan. The news was allegedly posted to the site 38 minutes before the story was initially broken by news outlets and reporters on Twitter.

A detailed post revealing Jeffrey Epstein’s death was allegedly leaked on the anonymous message board 4chan 38 minutes before the news first broke on Twitter by ABC News reporter Aaron Katersky, according to a report by BuzzFeed News. 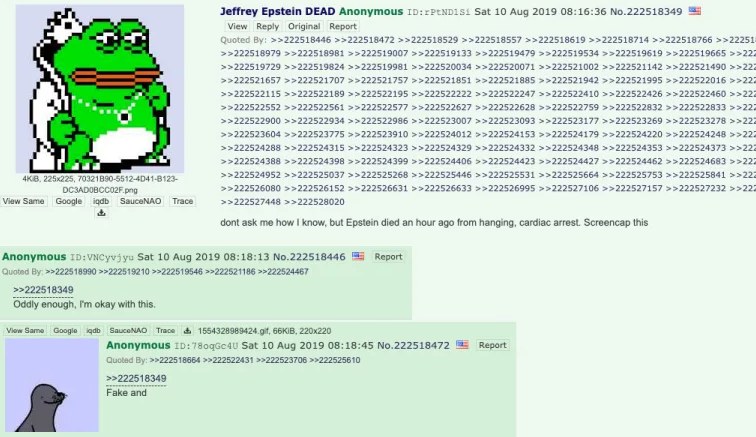 “[Don’t] ask me how I know, but Epstein died an hour ago from hanging, cardiac arrest. Screencap this,” said the 4chan user on Saturday, August 10 at 8:16 a.m eastern. Katersky published his tweet on the same day at 8:54 a.m.

The report added that following the initial 4chan post, the anonymous user added more, detailed information in response to other users who responded to the initial post with doubt. These details suggest that the 4chan leaker could have been a first responder or medical worker.

Emergency medicine physician Dr. Keith Wesley told BuzzFeed News that the 4chan post is laying out standard procedures for paramedics. According to Wesley, the section of the post that reads “telemetry advised bicarb” could be referring to first responders communicating with the hospital while they attempted to resuscitate Epstein.

“Telemetry implies the paramedics were in contact with a medical control hospital who then gave orders to give Sodium Bicarbonate, bicarb which is designed to reverse the acid buildup in the blood from prolonged cardiac arrest,” said Wesley, according to the report.

“If one of the medics posted this separately that’s a breach of protocol,” added Wesley. “If there was identifying information on the patient, that is a violation of Federal HIPPA law.”

The report also noted that one of the 4chan user’s claims described a 40-minute attempt to resuscitate Epstein, before transporting him to the hospital for another 20 minutes of attempted resuscitation, adding that these claims had been at least partially consistent with the information that was later publicly released by the Federal Bureau of Prisons regarding Epstein’s death.

“Staff requested emergency medical services (EMS) and life-saving efforts continued,” said the Department of Justice’s Federal Bureau of Prisons on Saturday. “Mr. Epstein was transported by EMS to a local hospital for treatment of life-threatening injuries, and subsequently pronounced dead by hospital staff.”

An FDNY spokesperson Frank Dwyer told BuzzFeed News that he “could not verify the accuracy” of information posted by the anonymous 4chan user, but mentioned that any medical personnel divulging patient information without consent is in violation of Federal HIPPA law, and that the FDNY would look into it.

“The department will review this incident,” said Dwyer. The FDNY later said that after reviewing the incident, authorities have “determined this alleged information did not come from the Fire Department.”