Mainstream journos are freaking out at Mark Zuckerberg following news that Facebook might make them compete on a slightly more equal playing field with Breitbart News.

The mass mainstream media meltdown was sparked by reports that Facebook will include Breitbart News in its new “Facebook News,” feature, which delivers news stories to Facebook users from a handpicked selection of 200 trusted news sources.

The full list of the 200 publishers has yet to be released, but early reports indicate that left-leaning and mainstream sources far outnumber right-leaning ones. Nevertheless, journos are still mad at the inclusion of Breitbart News.

should clarify: "outdated" is an imprecise word. what i mean is it is willfully ignorant of the realities of the pro-trump media information war.

Sign up for my newsletter to get it ➡️ https://t.co/Gl6evXRDcZ

Outside Breitbart, it's unclear what other websites known for misinformation might be in Facebook's news tab. The company is declining to release its list as of now. 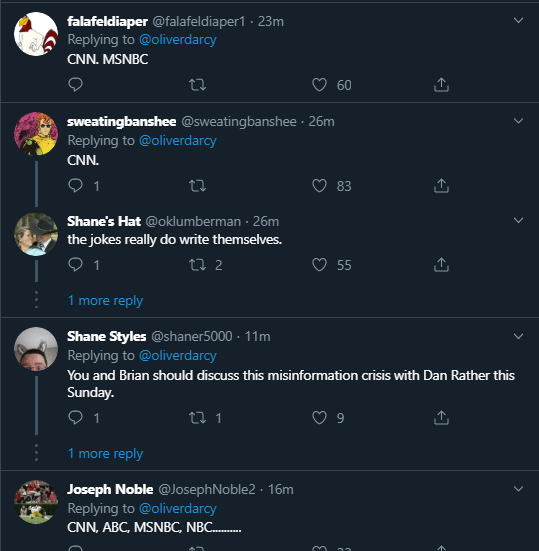 Important thread on the outrageous inclusion of Breitbart as a "trusted" news source in the Facebook News Tab. https://t.co/TTN5fjbchG

The editor-in-chief of the Information, a tech news website, called Breitbart’s inclusion “unfortunate.”

No better example of how a biz models shapes biz decisions than Facebook's unfortunate move to include Breitbart, which is far more advocacy than journalism, in its News Tab. The ad biz pushes companies to a "both-sides ism" that thankfully reader-supported businesses can ignore.

The articles on Breitbart, and the unmoderated comments below them, which feature unfettered racism, sexism and violence, have consistently broken @facebook’s Community Standards. Now they’re featuring this site as “trusted news.”

Who made this decision and what was the reason?

With Nostradamus-like prescience, Media Matters editor-at-large Parker Molloy said she was “looking forward to getting my tweets added to some dumb listicle that’s like “Lefties Lose their Minds Over Balance” (because they view this as balance).”

Anyway, looking forward to getting my tweets added to some dumb listicle that’s like “Lefties Lose their Minds Over Balance” (because they view this as balance)

“Every day, Breitbart disseminates conspiracy theories about immigrants and LGBTQ people,” said the official account of Immigration Equality, which has sued the Trump administration four times over its immigration policies.

Every day, Breitbart disseminates conspiracy theories about immigrants and LGBTQ people. Facebook's decision to partner with the white supremacist-connected site lends credibility to this misinformation and endangers our community. https://t.co/5IEPs02Qch

Left-wing clergyman Chuck Currie, whose Twitter header image features a picture of himself sporting a hoodie with the slogan “Jesus was a refugee,” called Facebook an “enabler of hate.”

Don’t ever say white nationalism isn’t a critical problem in America. @facebook is an enabler of hate. In a moral universe, Breitbart would be the definition of fake news, not a trusted resource of @fbnewsroom. https://t.co/BD7PEJ1Ool

Mark Zuckerberg has reportedly defended Facebook’s decision, saying “I think you want to have content that represents different perspectives.”