Australia Prime Minister Scott Morrison on Thursday hit back at Facebook’s move to block news in the country and called it “arrogant,” warning against “Big Tech companies who think they are bigger than governments and that the rules should not apply to them.”

Morrison, on his Facebook page, said “Facebook’s actions to unfriend Australia today, cutting off essential information services on health and emergency services, were as arrogant as they were disappointing.

“These actions will only confirm the concerns that an increasing number of countries are expressing about the behaviour of Big Tech companies who think they are bigger than governments and that the rules should not apply to them.” 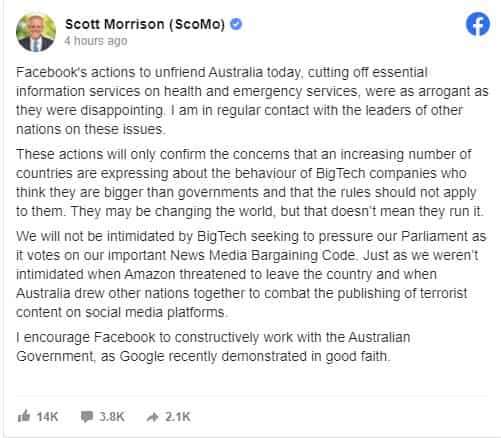 Morrison’s attack on the popular social network came after it announced “with a heavy heart” it will be banning Australian media outlets and censoring users within the country from sharing or viewing news articles on its service.

As Breitbart News reported, the Facebook news blackout comes in response to a new Australian legislation that would force it and Google to pay news publishers for their content.

Google and Facebook fought back because they allege it doesn’t reflect how the internet works, and unfairly “penalises” their platforms.

However, in contrast to Facebook, Google has in recent days signed payment deals with three major Australian media outlets while Facebook tried to make the Australian government blink first.

It didn’t, and Morrison’s conservative coalition government government has won wide praise for its backing of local media outlets over Big Tech operators.

In Canberra the reaction was the same.

“This is an assault on a sovereign nation,” Health Minster Greg Hunt told Parliament. “It is an assault on people’s freedom and, in particular, it’s an utter abuse of big technologies’ market power and control over technology.”

The digital platforms fear what’s happening in Australia will become an expensive precedent for other countries as governments revamp laws to catch up with the ever-changing digital world.

Both India and the UK have already said they are watching the media battle Down Under with interest and have flagged plans to follow Canberra’s lead.