Hackers are reportedly sending “antiwork” manifestos to receipt printers at businesses worldwide, taking over the common transaction record to spread their political propaganda.

Vice News reports that businesses around the world are finding that their receipt printers have gone rogue and are printing “antiwork” manifestos. The phenomenon has been reported by individuals who claim to have seen the receipts, multiple Reddit posts, and a cybersecurity company investigating the network traffic being sent to insecure printers. 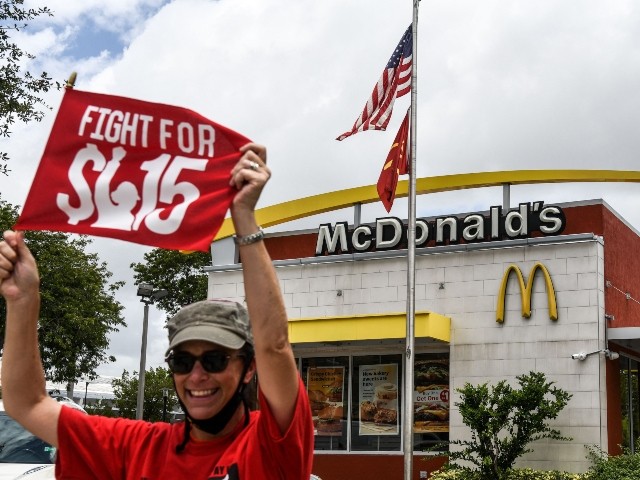 An employee of McDonald’s protests outside a branch restaurant for a raise in their minimum wage to $15 an hour, in Fort Lauderdale on May 19, 2021. (Photo by CHANDAN KHANNA/AFP via Getty Images)

One of the receipts reads “ARE YOU BEING UNDERPAID? You have a protected LEGAL RIGHT to discuss your pay with your coworkers. […] POVERTY WAGES only exist because people are ‘willing’ to work for them.”

Imagine you are working your shit retail job when this comes out of your register. R/antiwork pic.twitter.com/N6SAJ9ogq5

One Reddit user wrote earlier this week that the manifesto was being printed randomly at his job. “Which one of you is doing this because it’s hilarious,” the user wrote. “Me and my co-workers need answers.”

One Reddit user stated: “Stop using my receipt printer dudes. Although hilarious, I’d like it to stop.” Another user said: “I’ve received about 4 different messages at random times over the last week at work. Very inspiring, encouraging, and fun to see my bosses face when he has to rip them off the printer.”

Some Reddit users suggested that the messages are not the work of rogue hackers but are simply being printed by the employees at the stores with access to the receipt printer and posted to Antiwork for attention. But cybersecurity experts believe the receipts are the work of hackers.

Andrew Morris, the founder of the cybersecurity firm GreyNoise, told Vice News that his firm has noticed network traffic being sent to insecure receipt printers and that it appears that someone is indeed sending the printing jobs over the internet.

“Someone is using a similar technique as ‘mass scanning’ to massively blast raw TCP data directly to printer services across the internet,” Morris told Vice News. “Basically to every single device that has port TCP 9100 open and print a pre-written document that references /r/antiwork with some workers rights/counter capitalist messaging.”

Morris stated that whoever is doing this is doing it “in an intelligent way.” He added: “The person or people behind this are distributing the mass-print from 25 separate servers so blocking one IP isn’t enough.”

Morris continued: “A technical person is broadcasting print requests for a document containing workers rights messaging to all printers that are misconfigured to be exposed to the internet and we’ve confirmed that it is printing successfully in some number of places the exact number would be difficult to confirm but Shodan suggests that thousands of printers are exposed.” Shodan refers to a tool that scans the internet for insecure computers, servers, and other devices.