A federal jury convicted former Theranos founder and CEO Elizabeth Holmes on four counts of fraud and conspiracy Monday, ending the lengthy trial in Silicon Valley of a woman once hailed by the media as the next Steve Jobs.

The jurors convicted Ms. Holmes on the three counts related to the largest investments. These included about $100 million from a family office of former Education Secretary Betsy DeVos; $38 million from PFM Health Sciences LP, a hedge fund that invested $96 million in Theranos and recovered $43 million in a 2016 civil lawsuit against the company; and about $6 million from Daniel Mosley, a former estate lawyer who connected Theranos to his wealthy clients, who invested nearly $380 million dollars into Theranos.

The jury wasn’t fully convinced by testimony from other investors who said they had invested even after Ms. Holmes rebuffed their requests for more information, which defense lawyers said showed negligence on their part.

Ms. Holmes was exonerated on all accounts related to patients. Testimony from the three patients who received what they called false test results was limited, and the role of their healthcare providers in ordering and interpreting their tests may have also tripped up jurors, legal experts say.

Holmes, who had bowed her head several times before the jury was polled by the judge, remained seated and expressed no visible emotion as the verdicts were read. Her partner, Billy Evans, showed agitation in earlier moments but appeared calm during the verdict reading.

After the judge left the courtroom to meet with jurors individually, Holmes got up to hug her partner and her parents before leaving with her lawyers.

The jury of eight men and four women who determined Holmes’ fate spent much of their holiday season behind closed doors in a San Jose, California, courthouse, weighing reams of evidence presented during the three-month trial of Holmes, a former Silicon Valley star facing up to 20 years in prison for each guilty count.

Holmes, 37, was charged with 11 criminal counts alleging that she duped investors and patients by hailing her company’s blood-testing technology as a medical breakthrough that could detect a wide-range of diseases and medical conditions with just a few drops of blood taken from a finger prick instead of tubes of blood taken from a needle inserted into a vein. Investors were led to believe that Theranos’ “miniLab” device could revolutionize a blood-testing industry dominated by companies like Quest Diagnostics and Labcorp by making testing simpler, cheaper, and less intrusive. Holmes eventually partnered with Walgreens and Safeway to bring this finger prick blood testing to the masses. In reality, however, the miniLab device Theranos created was prone to wild errors, and most of the tests the company performed for Walgreens’ customers were done using third-party machines. 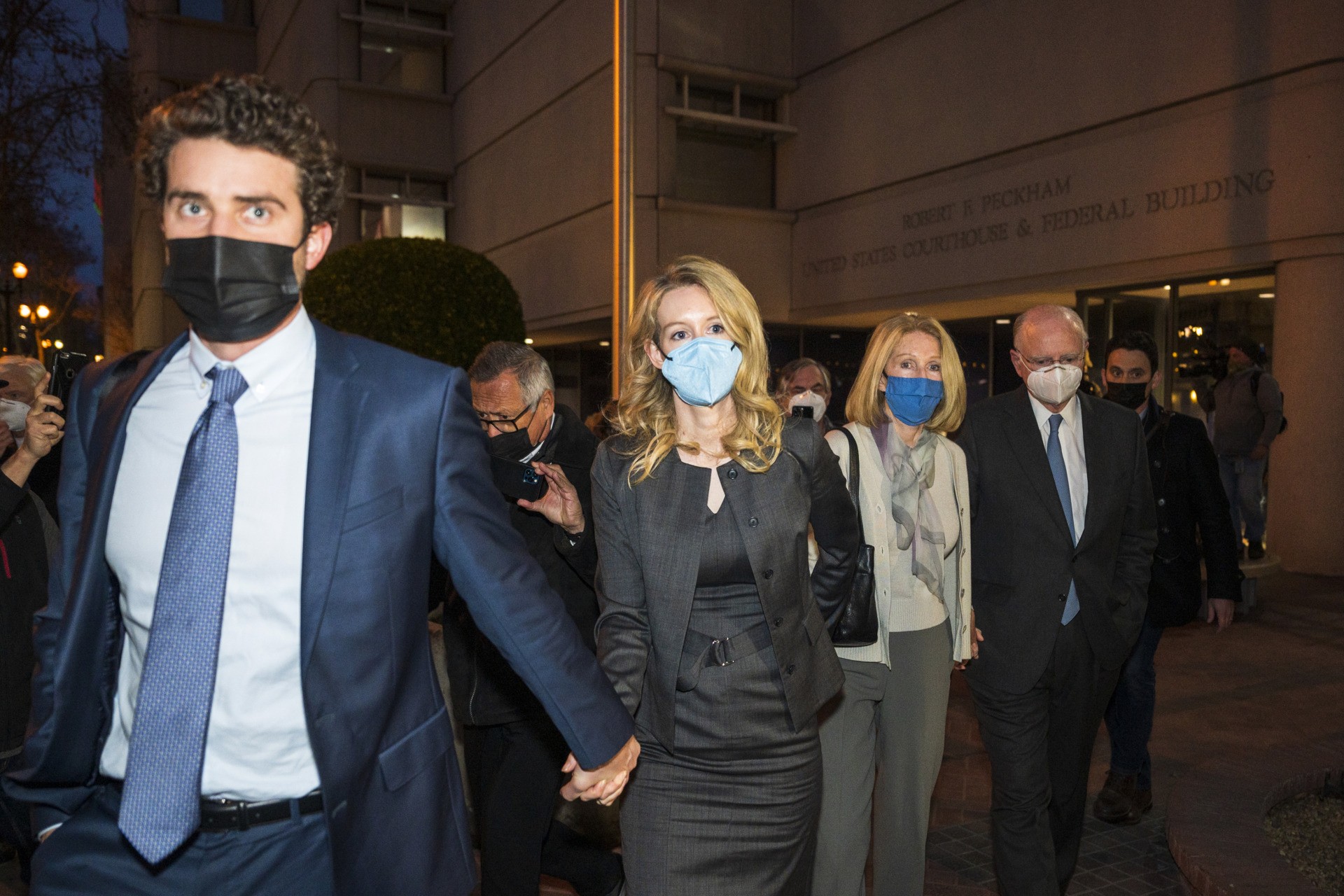 Before those problems were exposed in 2015 and 2016 by stories in the Wall Street Journal by reporter John Carreyrou and by a regulatory audit, Holmes briefly realized her aspirations for fame and fortune while raising more than $900 million from a list of renowned investors that included media mogul Rupert Murdoch, software mogul Larry Ellison, the family of former Education Secretary Betsy DeVos behind the Amway fortune, and the Walton family behind Walmart.

At Theranos’ height, Holmes had amassed a fortune of $4.5 billion on paper and was lionized as a visionary in glowing media coverage that included a famous cover story in Forbes magazine and a profile in the New Yorker.

Federal prosecutors argued that Holmes used this positive media coverage to lure the investors she is now convicted of defrauding. 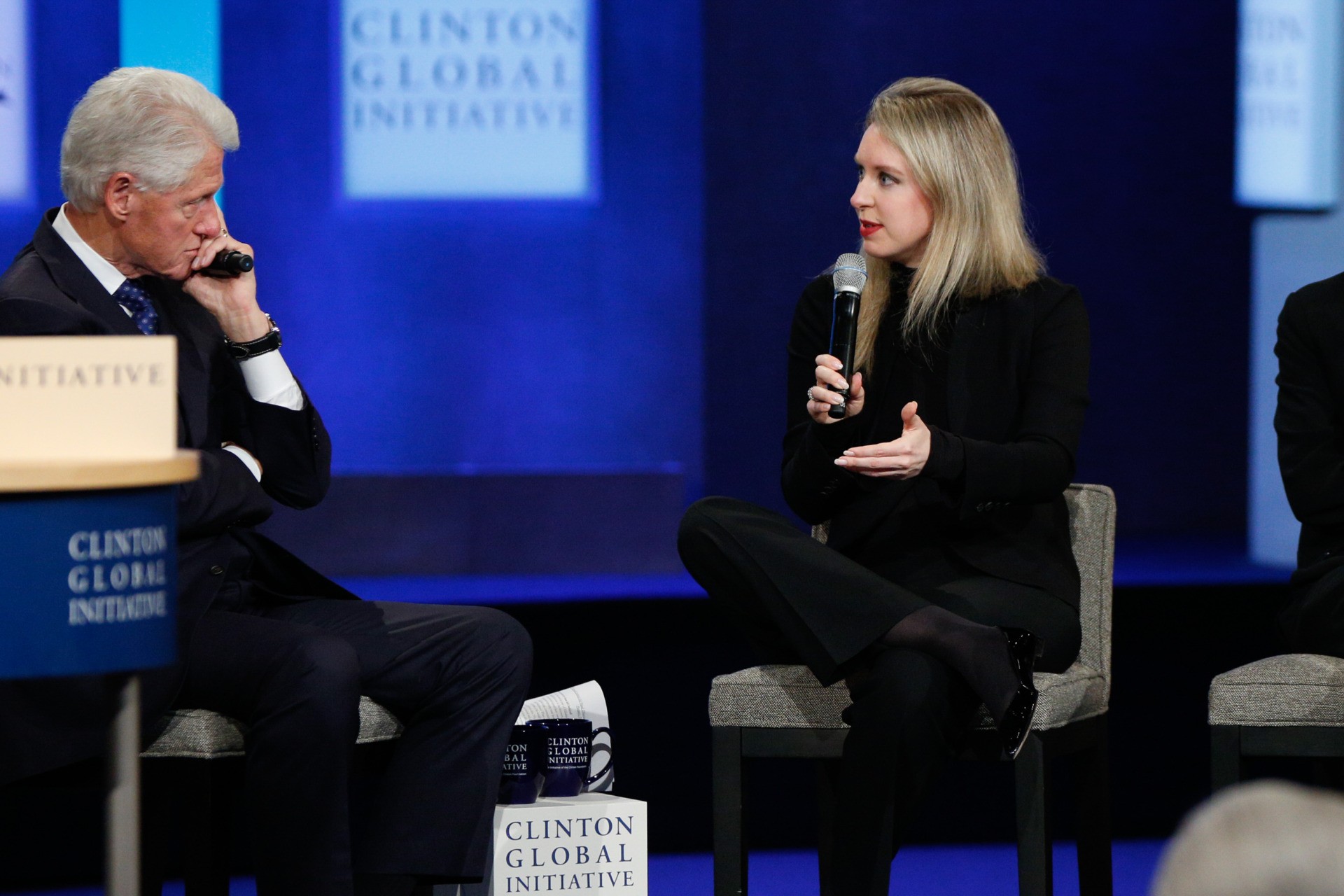 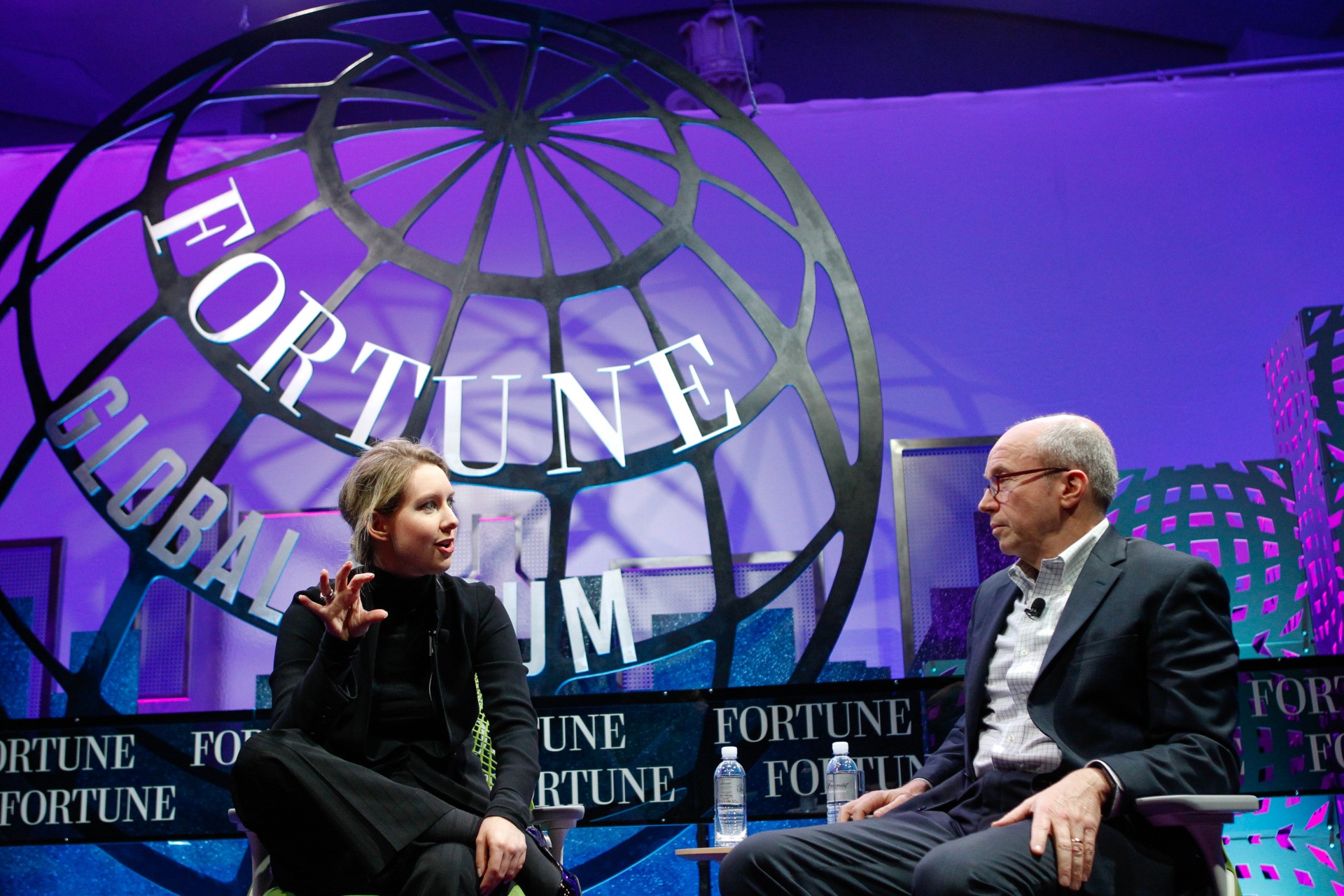 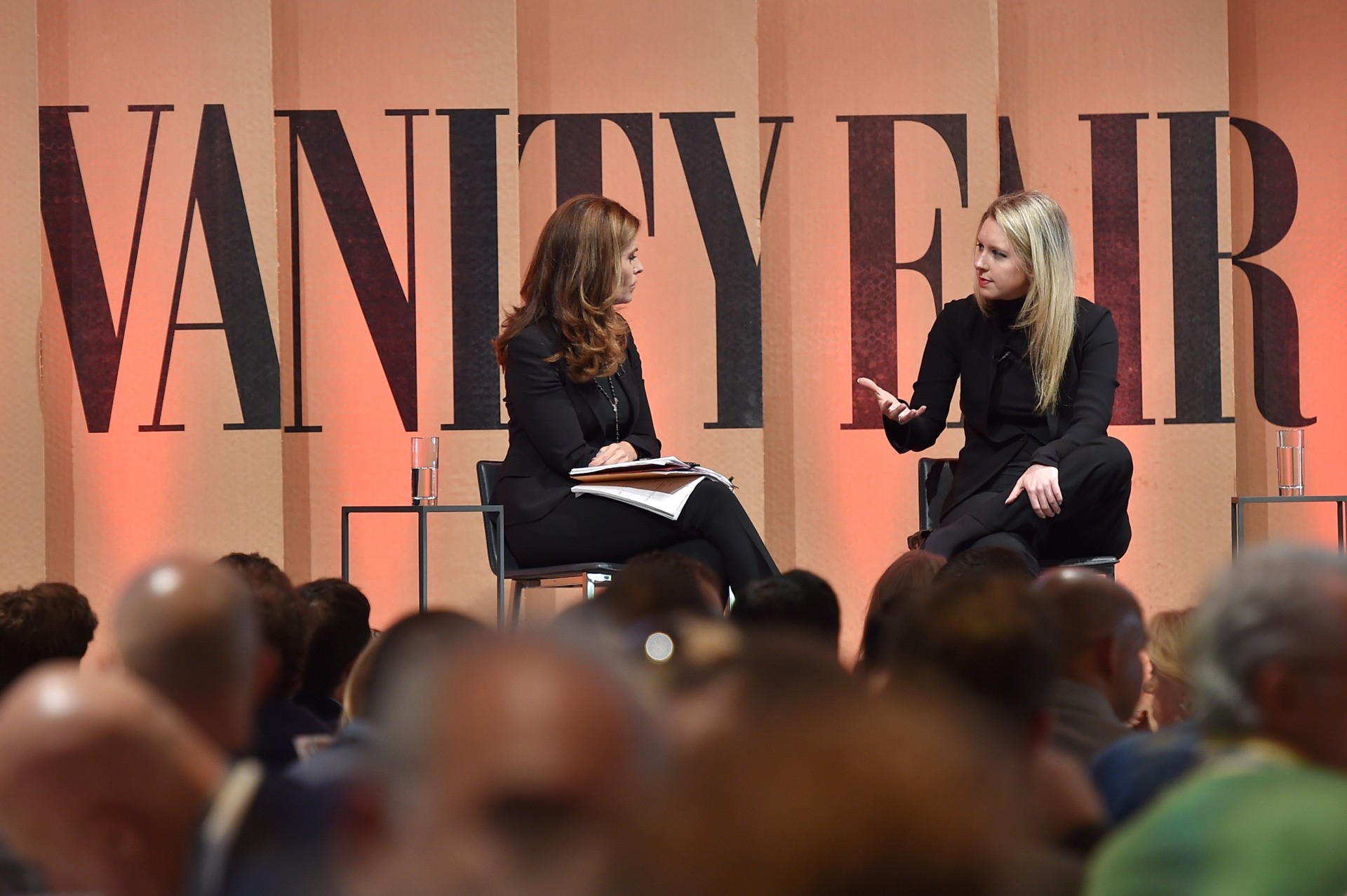 Holmes’ rise to power was abetted by glowing media coverage and bolstered by the reputations of the board of directors she assembled.

As Carreyrou explained in his book Bad Blood, these board members were “men with sterling, larger-than-life reputations who gave Theranos a stamp of legitimacy. The common denominator between all of them was that, like Shultz, they were fellows at [Stanford University’s] Hoover Institution.”

The vote of confidence and effusive praise from these men boosted Holmes’ credibility with Fortune magazine writer Roger Parloff, who wrote the first major media profile of Holmes.

George Shultz told Parloff, “Everywhere you look with this young lady, there’s a purity of motivation. I mean she really is trying to make the world better, and this is her way of doing it.”

Mattis told Parloff that Holmes “has probably one of the most mature and well-honed sense of ethics—personal ethics, managerial ethics, business ethics, medical ethics that I’ve ever heard articulated.” 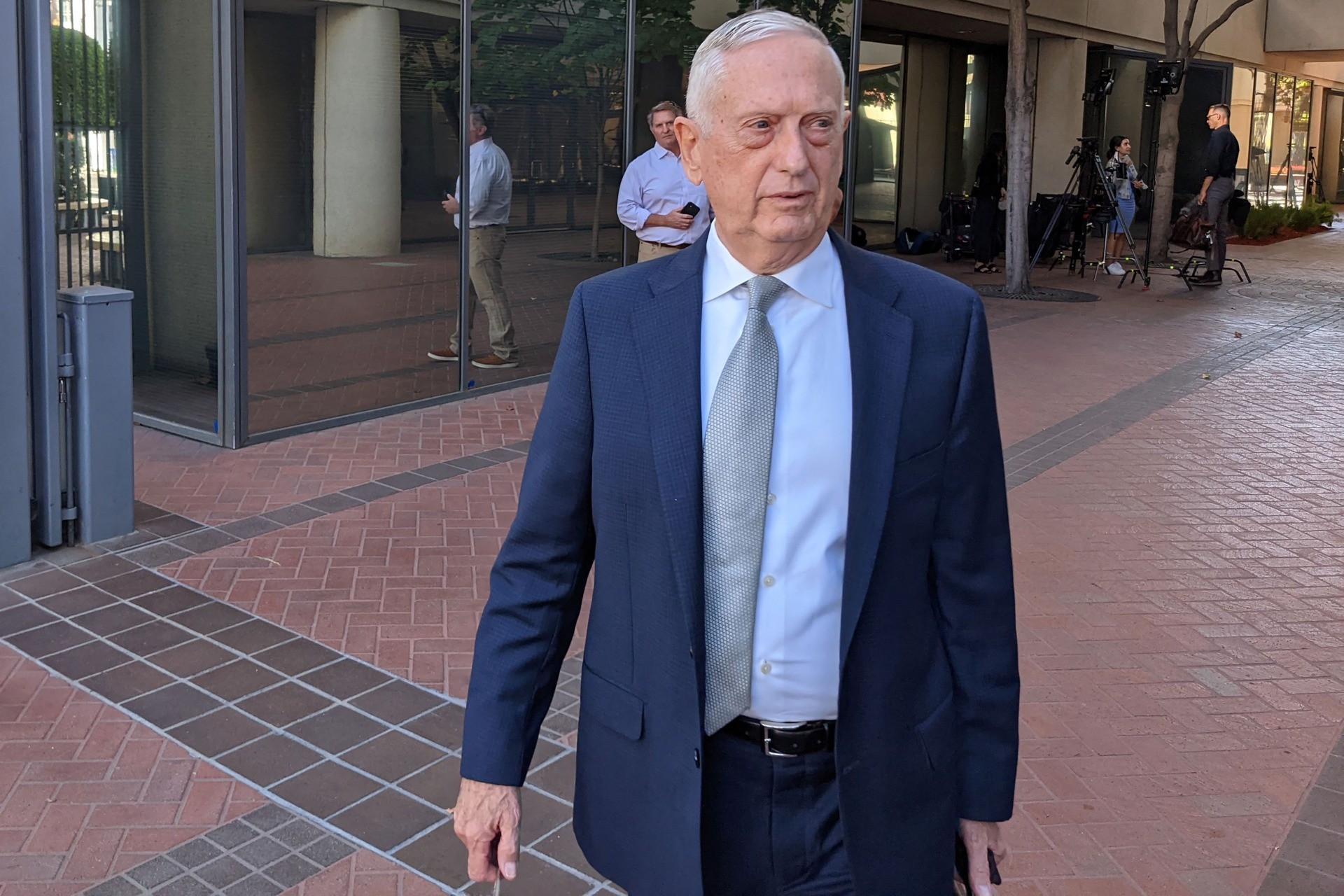 Former U.S. Defense Secretary Jim Mattis arrives to a courthouse to testify in the fraud trial of Theranos founder Elizabeth Holmes, in San Jose, California, on September 22, 2021. Mattis served on the board of Holmes’ now defunct startup. (GLENN CHAPMAN/AFP via Getty Images)

Holmes was also celebrated by the Obama administration during her rise to fame. Then-Vice President Joe Biden toured the Theranos lab in Newark, California, in 2015, praising Holmes for “empowering people” to “take control of their own health.”

“The @POTUS and I share your vision of a health care paradigm focused on prevention." – @VP Biden #ownyourhealth pic.twitter.com/ya7eCJlKE3

“This is inspiration,” Biden reportedly said at the time. “It is amazing to me, Elizabeth, what you’ve been able to do. What’s most impressive to me is you’re not only making these lab tests more accessible … empowering people whether they live in the barrio or a mansion, putting them in a position to help take control of their own health.” 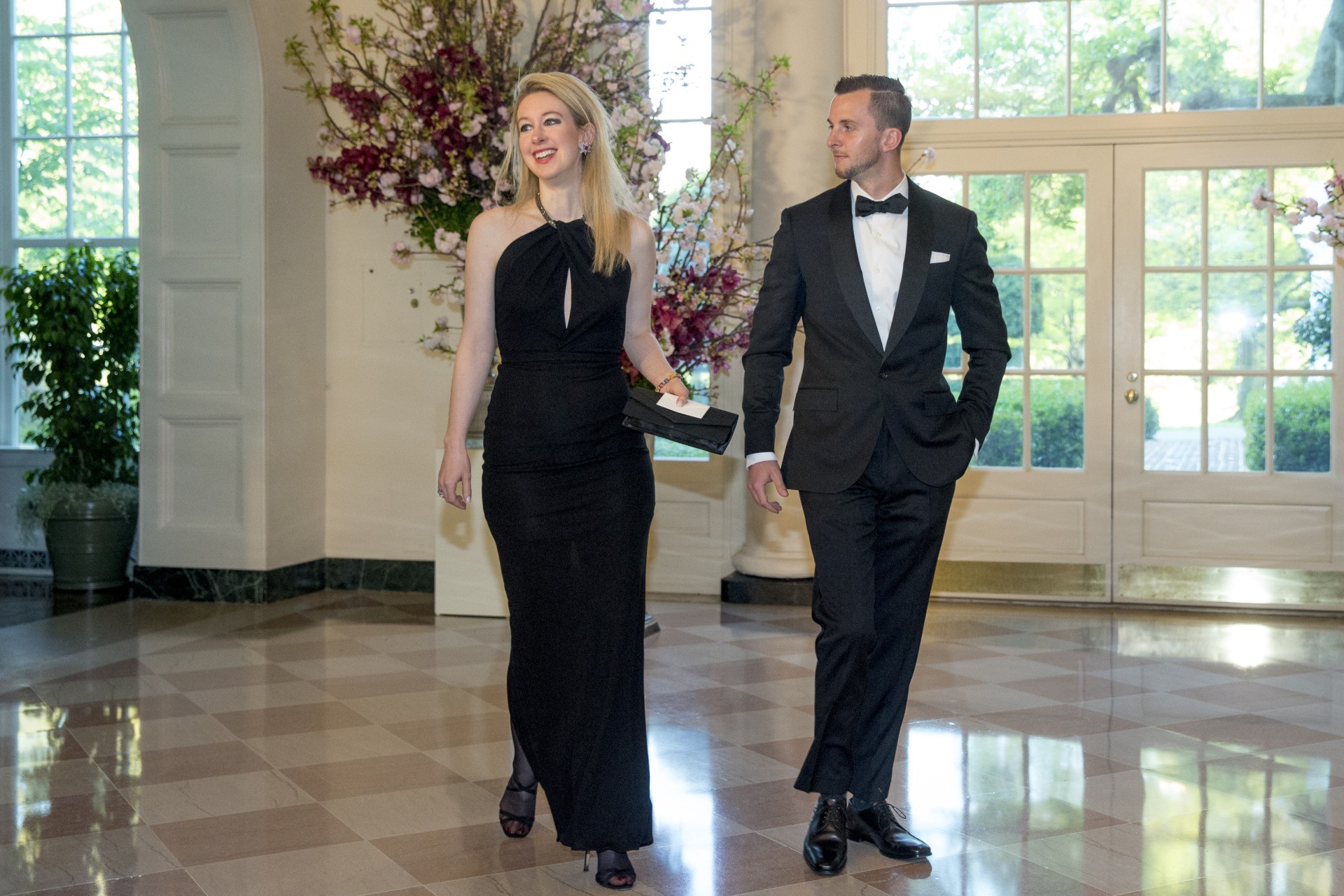 President Obama named Holmes as a Presidential Ambassador for Global Entrepreneurship in July 2015.

During the trial, federal prosecutors depicted Holmes as a charlatan obsessed with fame and fortune. Holmes, who took the witness stand in her own defense for seven days, cast herself as a visionary trailblazer in male-dominated Silicon Valley who was emotionally and sexually abused by her former lover and business partner, Sunny Balwani.

The fraud-friendly business ethos of Silicon Valley was also put on trial in the Holmes’ case, which cast Theranos as emblematic of the “fake it ’til you make it” attitude that defined the rise of big tech companies like Google, Netflix, Facebook, and Apple. In fact, Holmes idolized Apple co-founder Steve Jobs to the point of imitating Jobs’ trademark black turtle necks, as she did in her famous Fortune magazine cover image.

Earlier on Monday, the jury informed the court that they were deadlocked on three of the 11 counts Holmes was charged with. After conferring with lawyers for the defense and prosecution, U.S. District Judge Edward Davila instructed jury members to do their best to reach a verdict, noting that they should re-examine their own views and change their opinions if persuaded they are wrong. He also reminded them that charges must be proven beyond a reasonable doubt.

Jurors then returned to their deliberations and ultimately reached a verdict late Monday afternoon.

The Associated Press contributed to this story.